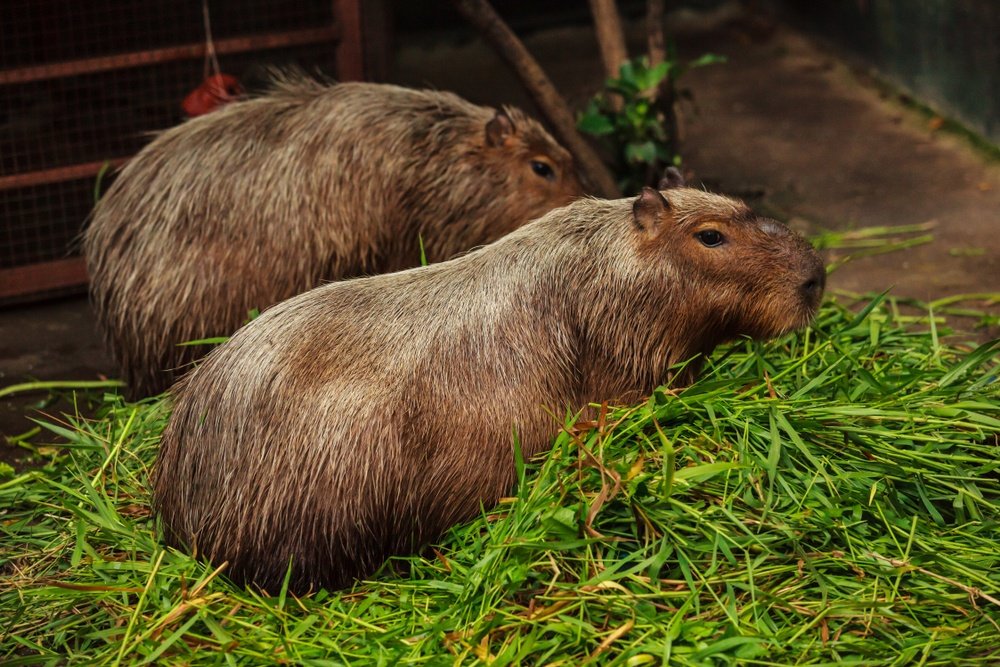 The mere mention of the word rodents evokes dread. Since time immemorial, they have been the unwanted guests for households. It is a commonly observed fact that they creep into the shadows, feast on the garbage of the families and are quite adept at spreading illnesses. On the other hand, a majority of these species reach massive proportions of sizes, and hence they are quite dangerous. If not controlled in time, they can invade homes and spread diseases. There are other types of rodents those are quite scary. A majority of them have a fearsome appearance, and they carry viruses that can wipe away the human population. Quite interestingly, a few select species of rodents are so big that they can scare away cats also. A majority of these rodents can inflict harm on the agricultural produce and fauna. It is also important to note that a majority of these rodents have caused the extinction of many species of birds on the insular ecosystems. Here is the list of significant rodents known to human beings. The Nutria is a herbivorous and burrow-dwelling rodent. Moreover, it is semi-aquatic and is inhabitant of southern parts of America and tops the list of rodents. In other words, Nutria resembles a giant rat and can measure up to 43 inches in length. Hence, it is quite evident that it is one of the largest invasive rodents. Moreover, in the species of Nutria, the adults can have a weight of 45 lbs. Through the period of the mid-1800s, this species was driven out of the usual environment. On the other side, the farming of nutria for fur was initiated in Argentina. In this context, it is important to note that at the end of the 20th century, the cultivation of nutria fur had extended to Eurasia and North America.

Moreover, during the 1940s, this species is a annoyance in various areas. For instance, it posed a considerable problem to the fields of rural England. It also posed a challenge to the households situated at Maryland and Louisiana. In these two areas, this species escaped from the confined fur extracting farms and after that began their multiplication process. During the 1960s, the anti-nutria campaigns and programs were launched to eradicate this rodent. Another interesting fact about this species lies in the fact that most recently, the products of nutria were included in foods of dogs. This species is also known as one of the most recent discoveries in the world of rodents. Scientists in the year 2009 first encountered this species of rats. When a research team stumbled upon a garbage pile in the Bosavi Center, they discovered this new species of rodents. Additionally, the research time gathered essential inputs about this species from the Kasua tribe.

Before the discovery of this type of species, they had no prior contact with the humans. Interestingly, this species measures 32 inches in size which makes it one of the largest rat species in the world. As it is a recent scientific discovery, it is yet to receive its status of a scientific name. After its development, its presence in the other regions of the world also came to the fore.

While the Bosavi woolly is one of the largest extant rat species in the world, it is not largest species of rat that ever existed. It is also known as an animal that looks like a rat but bigger. The excavators in Indonesia have found remains of a 1000-year-old rat species that weighed thrice that of the woolly rat species. Quite interestingly, the dense and inaccessible forests of East Indonesia have the potential to surprise scientists with the discovery of other extinct rodents. The giant Hutia is also known as a bear-like a rat which lived a long time ago in the Caribbean Islands. It was also 1000 times bigger than the size of today's rats and is known as the largest rat species. It has now become extinct and is officially known as Ambyrhiza. Past evidence has depicted that the slow-moving Hutia has been a species which was free of predators. When it existed on the island, there were lower sea levels. However, with the passage of time, sea level reached a certain point that made it difficult for this species to exist.

In this context, it is important to note that the descendants of this species still roam on the Caribbean Islands. However, they are quite small in size and weighs less than 6 pounds. Furthermore, these creatures are also seen in the Guantanamo Bay where they are also known as Banana Rats. It is also the largest rodent in the world. The Gough Island is positioned in the Atlantic Ocean where almost two million mice have made it their territory. One of the fearsome aspects about this variety of mice lies in the fact that they are twice the size of their counterparts who live among the populated human world. In this context, it is important to note that the development of this rodent species has been increased when it consumed the petrel chick.

Moreover, the petrel chicks are the main diet of this variety of mice. These species of mice are known to be quite dangerous as they could shake the foundation of a mud house. A large number of a tribal population when surveyed have put forward that this mice drilled holes in their home's mud walls. On the contrary, these varieties of pests have no ordinary enemies. This has ensured that they grow in large numbers. The fur traders accidentally introduced this type of mice and the rapid reproduction techniques further aggravated the problem.

The eradication method to eliminate this variety of rats is still undergoing despite some initial hurdles. In the year 2010, the full obliteration of this species of rats was completed on the Hawadax Island of Alaska. Rodents have plagued this island for more than 250 years which prompted authorities to go forward with the elimination process.

5. The Viking Rats of Sweden The Viking Rat of Sweden was first discovered when it was found biting through walls in a Swedish family in the year 2014. However, the rat was eventually stopped with the help of an industrial trap. In this context, it is important to note that the rat was finally arrested with the help of an industry-sized trap. It also ultimately suffocated to death when it headed back to the tunnel.

The Swedish family realized that something was wrong in the kitchen area when their pet cat grew averse to visit that area. In other words, the size of the rat was larger than that of the pet cat. Hence, the cat was afraid to visit the kitchen area. The Viking Rat was also sighted in a large number of regions in Europe and Great Britain. Hence, the sightings of this species of rodents are indicative of the mutation within the rat populations.

As per experts who have observed the Viking Rats are of the opinion that it is double the size of regular rats. Moreover, it is more significant than household cats as recent findings in Dublin depicted that the Viking Rat can grow up to 24 inches. In addition to its enormous size, this species of invasive rodents have become immune to poisons. Hence, they cannot be killed with the help of regular household rat poisons. This is the reason that new varieties of toxins are in the process of discovery to eliminate this variety of rats. The capybara is one of the world’s largest rodents. It lives in the steamy plains of South America and can outweigh modern-day Labrador retrievers. It has been a tradition for the Venezuelans to eat Capybara on the occasion of Easter, The meat of this type of rodents is a delicacy that has been savored by Venezuelans for an extended period. It is the largest rodent to ever live in this world.

A majority of individuals are still not aware of the fact that this rodent has a habit of eating its feces. On the other hand, a large number of tribal populations have domesticated these rodents. Interestingly, they can be social with your house cats and dogs. However, they are not that good when rabbits are around your home. However, this species of rodents can be aggressive, and their bite can cause even death if not treated properly.

Another interesting fact that can be mentioned here is that scientists have unearthed rodents larger than the Capybara in Caracas. This type of rodent weighted more than 700 kilograms, and it roamed the banks of the ancient river. However, this species went extinct because their predators grew large in numbers. Moreover, due to their large size, they could not hide, and ultimately they became extinct. Many also call it is as the largest rodent alive till now. The Castoroides were also known as the enormous beaver and largest rodent. It is an extinct North American rodent that existed once a time. At the time of its survival, it weighed more than 270 pounds, and the total length of the body of the creature ranged from 6 to 7 feet. This type of species is also known as one of the largest species that ever roamed the earth.

The extinct version of this species has more massive hind feet and broader teeth. This feature enabled them to invade homes with relative ease. The first fossils of this type of species were found in Ohio in the year 1830. Since then, the discovery of this particular species has spanned from Europe to Alaska. They also have large concentrations of Illinois and Indiana.

This type of species was quite dangerous and was believed to be the primary reason behind the outbreak of various diseases. They were also quite adept at invading the households and thus are known as one of the most dangerous rodent species ever to live in this world. The Cape Porcupine belongs to the territory of South Africa. These species of rodents can grow up to 27 kilograms which in turn makes them the third-largest living rodents and is the largest rodent ever. It is important to note that the Cape Porcupine have over 30,000 quills and measures 8 centimeters in length. Moreover, the feathers of this species have been in use for home décor purposes for over a considerable period.

Despite their terrifying weaponry, it is fortunate that they are not aggressive. They spend most of their time on the ground and feeds on leaves and roots. On the other hand, they are one of the longest living rodent species on the earth. For instance, they lived for more than 20 years in human captivity. Human settlements beside their dwelling areas experienced invasion as this species have their curiosity. However, the scientists are of the opinion that they used their teeth to fight off their enemies. It is so because they lived in a hostile world of many predators at that time. Moreover, the teeth were also used as the best form to depict strength at the time of mating.

While it is unlikely that you would come across the earth’s biggest mouse in real life, little rodents can get in your way or invade your house. This is the reason that you should be equipped with pest control methods and mechanical traps. Moreover, these nasty little creatures can transmit viruses which can be detrimental to the health of your family. They can also inflict a lot of damages in the form of gnawed wires and damaged undergrowth.