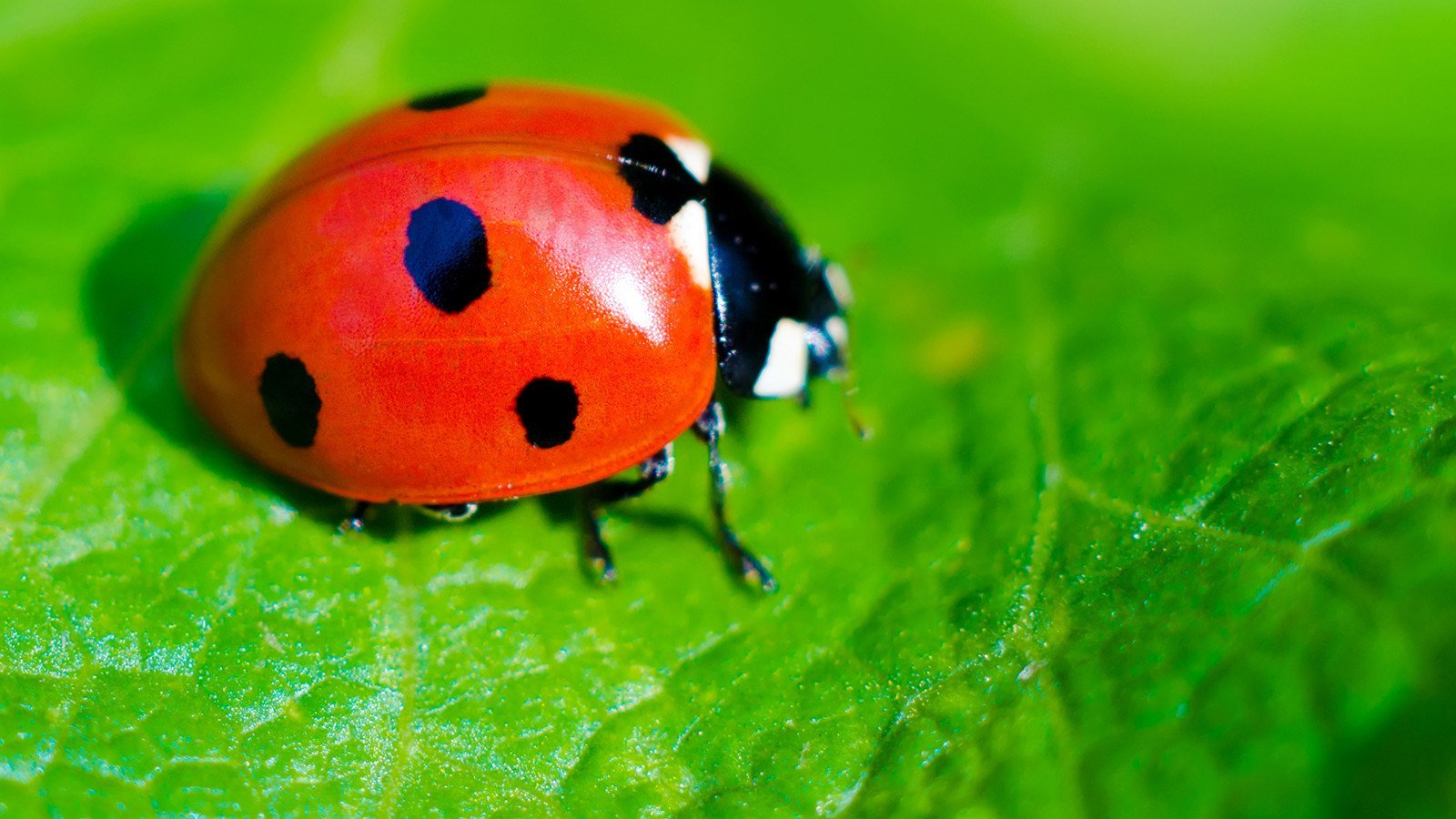 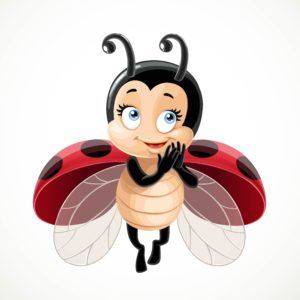 The ladybug goes by many names: ladybird, lady cow, lady beetle, mariquitas (ladybugs in Spanish) and lady fly. One of the few insects to be called “cute,” ladybugs can be found in most parts of the world, and they’re symbolic of different things in numerous cultures.

From appearance to habitat, life cycle and potential dangers, we cover everything you need to know about the ladybug in our guide below.

Yes. Ladybirds are a part of the Coccinellidae family of small beetles, and there are a variety of species of this tiny beetle.

How Did Ladybugs Get Their Name?

These adorable little beetles got their name from Catholic farmers, who prayed to the Virgin Mary to save their crops from pests. These red-spotted bugs appeared, and ate the pests. These helpful creatures were called “the beetles of our lady.”

Most ladybugs are between 0.8 and 18mm in size, depending on the species and sex of the beetle, and are oval in shape. Red ladybugs are the most common, but you’ll also find yellow and orange varieties as well.

Ladybirds typically have black spots, which is one of their most defining features. They have black antennae, heads and legs as well.

These tiny beetles also have white spots on each side of their head.

The spider mite destroyer is another species that looks a little different than the average ladybug. Not only are these beetles really tiny (1 1/2 mm in length on average), but they’re all-black in color. As their name suggests, these guys feast on spider mites and can eat up to 100 mites in one day.

Some are. Despite its name, there are both male and female ladybugs. But it’s really difficult to distinguish the two without a keen eye or a magnifying glass.

Male ladybugs are typically smaller in size, and there’s a reason for this: when ladybugs mate, the males latch onto the wings of the females for one to two hours. The larger female gives the male support.

When viewed under a microscope, you’ll also find that males have hair on their abdomens and bands in between their segments.

Where Do Ladybugs Live?

The ladybugs habitat is vast. These beetles can live just about anywhere in the world, but they love warmer climates.

While ladybirds live outdoors, they sometimes head indoors for the winter. These bugs hibernate in the winter, and they tend to do so in groups.

If you see a ladybug or two in your home in the winter, you can be sure there are more hiding somewhere.

How Long Do Ladybugs Live?

Lady beetles can live up to one year. Some species can live two to three years. And it takes just a few months for larvae to reach the adult stage.

What is the Ladybugs’ Life Cycle? 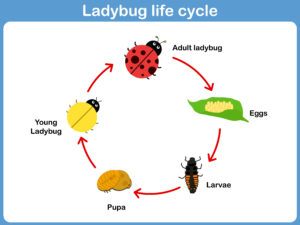 Female ladybugs can lay over 1,000 eggs in their lifetimes. Ladybugs eggs are yellow in color, and long and narrow.

Females lay eggs on the underside of leaves in clusters of about 10-50. Typically, females deposit eggs near aphids, so the larvae have a food source when they emerge.

It takes roughly three to five days for these eggs to hatch into larvae. The larvae will feed on insects and aphids for two to three weeks before advancing to the pupa stage. What’s interesting about these beetles is that females will lay both fertile and infertile eggs. The infertile eggs serve as an emergency food source for larvae. The ratio of fertile to infertile eggs is dependent on the scarcity of the food supply.

Ladybug larvae will shed its skin numerous times before reaching its full size and transition into the pupa stage. The ladybugs pupa stage lasts anywhere from five to seven days.

What Do Ladybugs Eat?

Lady beetles are predators of Sternorrhyncha, a suborder of insects that includes scale and aphids. But some species of this beetle specialize in certain prey.

The spider mite destroyer, for example, can eat up to 100 spider mites in just one day. The mealybug destroyer, as you may have guessed, feeds on mealybugs and other types of soft scales.

In general, the ladybugs food consists of insect pests, which is why these little beetles are considered friends of gardeners and farmers.

Are ladybugs carnivores? Yes – well, most are.

Their food of choice is aphids. Aphids suck the sap out of plants, and an infestation can completely decimate a garden. One single ladybug can eat 5,000 aphids.

But not all ladybirds are carnivores. Some also eat mildew, mushrooms and pollen. A select few species eat plants and are considered pests, like the Mexican bean beetle.

No. Lady beetles are not poisonous to humans, but they can be toxic to certain animals. These beetles emit a foul odor to deter predators from eating them. Their bright colors and black spots also serve as a warning to potential predators that they may not make for a great lunch.

No. Many people assume that orange ladybirds are poisonous because of their color, but they are not. Just like most other species of ladybugs, they are only poisonous to certain types of animals – not humans.

Do Ladybugs Have Wings?

Yes. Ladybugs wings are covered by their “shell.” And yes, these beetles can fly.

Their tough outer shell protects their wings, also known as the elytra. Their wings are hinged to the pronotum, which is a section of the body just beneath the bug’s head.

Ladybugs flap their wings from front to back and at high speeds of up to 85 times in a second.

When they land, their wings fold neatly back underneath their shell.

Yes, but at best, you’d feel just a little pinch. Lady beetles have chewing mandibles, which means they technically can bite. But they do not have poison saliva or glands, so a bite wouldn’t cause you anything but very minor irritation.

Ladybugs aren’t interested in biting humans unless they have to in self-defense. Even then, they’re more likely to bleed on humans, which leaves a pungent odor.

If you are unlucky enough to be bit by a ladybug, you can find peace of mind in knowing that these beetles do not transmit diseases or parasites, nor will they feed on your blood. At worst, you’ll be dealing with a bug bite bump that lasts a few days.

What Do Ladybugs Symbolize?

Because ladybugs are so beneficial to farmers and gardeners, they are praised by many cultures and considered to be symbols of good luck, although ladybugs symbolism can vary between cultures.

In some cultures, a ladybugs good luck is measured by the number of spots on its shell. Each spot represents a month of good luck.

Some ladybugs quotes also suggest that if one lands on a female’s hand, she will be married within the year.

To aphids, maybe. Ladybugs are generally harmless. Even if you find yourself with a colony of these beetles in your home for the winter, they won’t damage anything in your home.

They are dangerous to pests, which can be a very good thing for humans and their gardens.

With that said, if you eat a ladybug accidently, you may be in for a real surprise – these creatures taste foul.

Absolutely not. Lady beetles are alive and well in most parts of the world.

But there is one species that is considered nearly extinct: the nine-spotted ladybug. This ladybird is virtually extinct in North America due to the introduction of alien ladybird species, which are driving out native species.

Are Ladybugs Good for Plants? 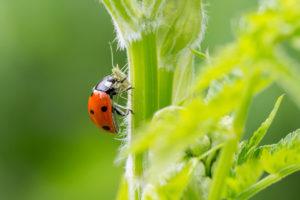 Yes. Ladybugs are considered beneficial insects because they feed on pests like aphids. Aphids suck out the sap from plants, which can cause serious or fatal damage. With lady beetles eating thousands of these pests over their lifetime, they can be extremely beneficial to plants.

They also feed on other scale insects, which infest shrubs and trees, so they’re friends of the forest, too.

Lady beetles can be found eating spider mites, too, which can destroy plants by dehydrating them. Spider mites commonly infest beans, melons, strawberries, peas, house plants and tomatoes, so ladybirds are especially beneficial to these plants and humans.

Yes, they are. In fact, lady beetles are a part of the largest group of pollinators. For some species of ladybugs, their diet consists of 50% pollen. And the species that eat pollen make sure there is enough left to pollinate the flower after it’s done eating.

Can You Buy Ladybugs?

Yes, you can. And many gardeners do. Because of their diets, lady beetles act as a form of natural pest control, so gardeners can enjoy a larger yield.

But the bigger question here is: should you buy lady beetles? If you’re buying them for your garden, experts say: maybe.

Because there’s a very real chance that once you release these beetles, they will simply fly off, settle somewhere else and procreate. Essentially, there is no guarantee that the colony you buy will benefit your garden. Your neighbor may wind up with all the benefits while you foot the bill.

As an alternative to buying these beetles, you can attract them to your garden. A good way to do this is to plant lots of flowers. Lady beetles supplement their diets with pollen and nectar, so they’re sure to come and stay a while if you have ample supply of both.

Yarrow, aster, cone flower and sunflower are all attractors of ladybugs because they give them a place to hunker down when they’re not hunting.

Lady beetles also love Asclepias, Alyssum and Penstemon. As for food, they prefer carrots, cilantro, chives and dill. Planting these flowers, herbs and vegetables will help naturally attract ladybugs to your garden and help ensure they stick around.

Where to Buy Ladybugs

Believe it or not, you can purchase lady beetles online and have a live colony delivered to your doorstep. You may also find local sources to purchase your ladybugs from. In most cases, it’s best to buy from a local supplier because they are more likely to have native ladybug species.

What Are Ladybugs Without Spots? 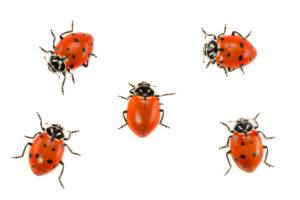 Ever see a ladybug without spots? These are called no-spotted ladybugs, and their markings on their heads helps differentiate between different types.

Don’t worry – these guys are harmless and won’t damage your plants. They just happen to be a species without spots.

Ladybugs are beneficial insects, especially in the garden. They’re symbols of good luck, and they don’t damage your home or possessions like other insects. With that said, it is possible to get an infestation of these beetles, especially in the winter when they’re ready to hibernate. While you may be tempted to exterminate them, it is important to remember that once spring arrives, they will fly off and may even head out to your garden to munch away on aphids. They won’t damage anything in your home, and it may be more beneficial to give them shelter until spring arrives.

While lady beetles are not harmful to humans, they can bite and they do emit a foul-smelling yellow liquid. Their bites are harmless and feel more like a pinch.

At the end of the day, ladybirds are our friends, and do little more than help your garden flourish.