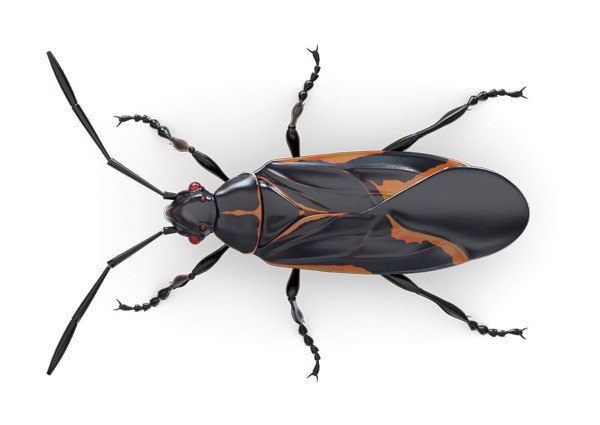 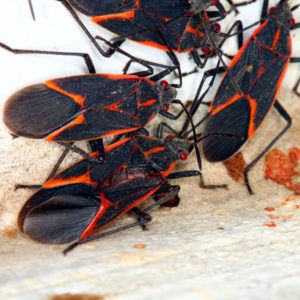 You probably never heard of boxelder bugs until you started seeing them skitter across the floor. And while these bugs aren’t damaging to your home, their feces can do some serious staining to your furniture and linens (gross).

Have no fear – we’re here to help you get rid of these unsightly bugs once and for all. But first, a little education on what these bugs are, where they nest, and their lifecycle.

Boxelder bugs are winged insects that are black in color with red lines that run along their sides and thorax. Their wings are red and flat, and most are between 11 and 14 mm in length.

Nymphs are a bright red color.

Boxelder bugs are sometimes called stink bugs, but these are two different insects. Boxelders belong to the Rhopalidae family, which are known as “scentless plant bugs.” But the boxelder bug can release a very pungent and terrible-tasting compound to deter predators.

You’ll know you’re dealing with a boxelder bug by the smell they emit when you crush them – it’s rather – well – stinky.

Where Do They Nest?

The boxelder bug is found primarily outdoors in the spring and summer months. They nest in – you guessed it – boxelder trees, a type of maple tree that is also known as Acer negundo. And while they prefer these trees, they may also nest in other types of maple trees as well as ash trees. 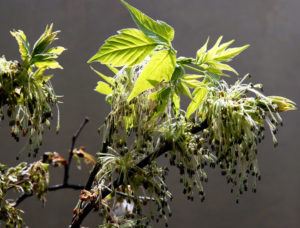 Once the cold weather rolls in, these bugs will migrate indoors to buildings and homes. They make their way inside through small crevices and cracks in the building, and they will remain there until spring arrives.

Boxelder bugs tend to hang out in the warmest regions of the structure’s walls.

What Do These Bugs Eat?

Boxelder bugs primarily feed on the seeds of boxelder trees, but they’ll also eat the leaves, flowers and twigs as well. They may also extract juices from the tree, which can cause significant damage in some cases.

These bugs will eat other types of plants as well, including ash and even stonefruits, such as plums, cherries and peaches. They’ll also munch on grapes, apples, grass and strawberries.

How Do They Reproduce?

Female boxelder bugs lay eggs that are reddish-brown in color, which makes them especially difficult to see when laid on the bark of their host tree. The eggs hatch in just a few days, and the nymphs are red and gray in color.

Baby boxelder bugs will go through a series of molts before developing into adults and starting the reproduction cycle all over again.

Most second-generation bugs will mature by August or September, and will make their way inside to overwinter until spring.

No. Boxelder bugs are considered a nuisance. They do not sting, nor do they transmit disease. While they are not known for biting, there are rare reports of defensive biting with these insects.

Their excrement, however, can stain light-colored surfaces, including furniture and linens. If you have an infestation, this “nuisance” pest can quickly turn into a royal pain in the neck.

How to Get Rid of Boxelder Bugs Inside

You have boxelder bugs in your house. Great. Now what?

How do you get rid of them? What kills boxelder bugs?

First, it’s important to remember that these bugs rarely stay indoors for more than a few days. Once the cold weather arrives, they go dormant until spring, which means they won’t leave their hiding spot in the walls.

Because they don’t nest nor breed indoors, they really just want to find their way out once they emerge.

While it may not seem like it, their goal isn’t to stain everything they can get their hands on before heading outdoors to enjoy the warmer weather.

Experts do not recommend using insecticides on these bugs because they really aren’t effective and won’t necessarily prevent more from making their way into your home. The only thing you’ll really be doing is spraying potentially toxic products around your home.

With that said, there are other measures you can take to keep these pesky insects out of your home.

The best boxelder bugs control is prevention, and the key to prevention is bug-proofing your home.

The University of Minnesota suggests the following:

Boxelder bugs can make their way inside through tiny openings, so you’ll want to seal and repair any potential entryways they may be using.

Start by checking the door and window screens in your home. Look for any damage or large holes, and repair or replace as necessary.

Damaged screens in kitchen or bathroom fans or soffit and roof vents should be repaired or replaced as well.

These bugs can get inside through openings where utility lines run into the home, like phone lines, TV cable connections, pipes and wires. Seal any areas around these objects where they enter your home.

Larger cracks and crevices should be sealed with caulk, copper mesh or another type of sealant.

Door thresholds or sweeps should be installed on any exterior doors, and the bottoms of garage doors should be fitted with rubber seals. 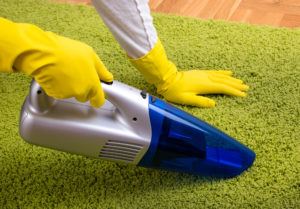 A simple but really effective way to get rid of these bugs is to just vacuum them up. Remember, these guys do not nest or reproduce in buildings, so once they’re gone – they’re gone.

Do yourself a favor and try to use a vacuum that uses a bag rather than a canister. Bags can be tossed after vacuuming up the bugs, which will save you from having to smell that awful stench these buggers release.

If you only have a bagless vacuum, do be prepared to throw out the trash right away – and keep some air freshener on hand just in case the stench gets out of control.

If you’re dealing with a pretty significant infestation, you can try a boxelder bug spray. Sprays for cracks and crevices that contain pyrethrins work best. They work to kill the bugs while breaking down quickly in the environment.

You may also consider laying down diatomaceous earth along the bottoms of window sills and door jams. This powdery substance will kill other bugs as well by piercing their exoskeletons and sucking up their moisture, causing them to dehydrate and die.

If you don’t have diatomaceous earth or cannot find it in stores, borax will work in a pinch. Just be careful not to place borax anywhere where children or pets can get to it.

It’s often worth searching out diatomaceous earth because it’s non-toxic to pets and humans. This substance is just the fossilized remains of a certain type of algae. You can even put it on your pet’s coat to prevent fleas.

How to Get Rid of Boxelder Bugs Outside

The absolute best way to keep boxelder bugs out of your home is to eliminate them from your yard or surrounding area. But to do that, you may need to take drastic measures that you may or may not feel comfortable doing.

One thing we do want to note is that getting rid of these bugs completely may wind up causing other, bigger issues in the long run. When the boxelder bug is gone, it makes room for other damaging bugs to come in and take over. The remains of these bugs may also attract unwanted pests, like the carpet beetle.

Boxelder bugs live and feed on boxelder trees, so eliminating these host trees from your yard can keep the population under control. Female, pod-bearing trees are particularly attractive to these bugs.

Cutting down and removing boxelder trees from your yard will eliminate this bug’s food and shelter, which will give them no reason to stick around.

But do keep in mind that this may not completely eradicate your boxelder bug problem. These bugs can fly, which means that can migrate to your home from nearby areas – or even a neighbor’s tree.

If you can’t – or don’t want – to remove these trees, you can help keep the population under control by removing any fallen seeds near the tree or on hard surfaces in your yard. These bugs feed on the seeds of the tree, so eliminating their main food source can keep their numbers to a minimum.

Experts also recommend removing any landscape debris, wood piles and other debris from your yard to deter these bugs. Wood piles and debris can serve as shelters for these bugs in the winter, so removing them can help keep populations under control.

The boxelder bug is really more of a nuisance than a damaging pest, but using the methods above, you can prevent these insects from hibernating in your home during the winter – and staining your furniture when they emerge in the spring.

Sealing up cracks and crevices will help keep boxelder bugs out of your home, and keeping your yard tidy will keep the population under control when cold temperatures roll in.