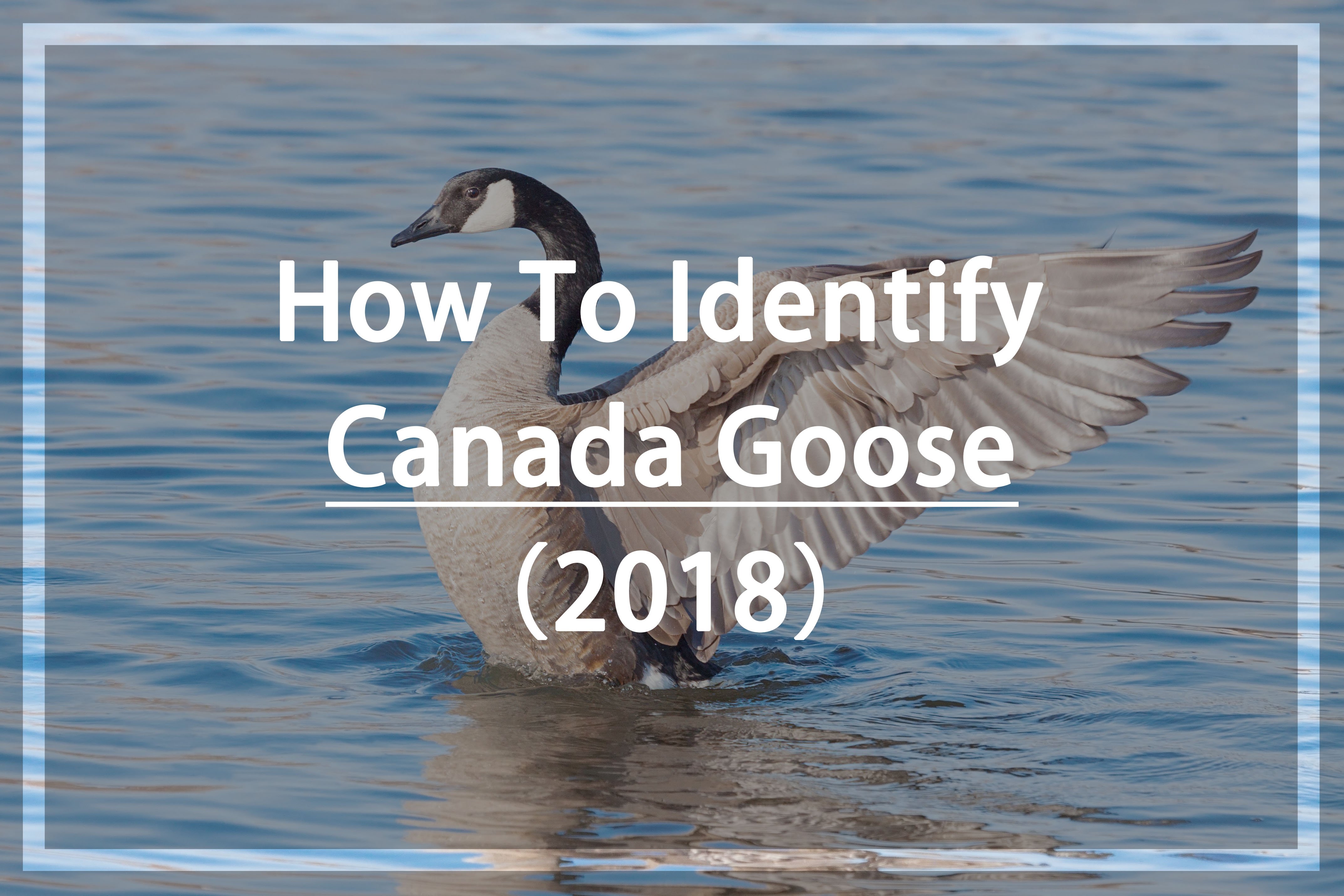 How To Identify Canada Goose

Canada goose otherwise known as Canadian goose is a very large bird, the largest goose in the world, ranging from 0.75m to 1.1m in length and have a wingspan that spreads up to 1.27-1.85m wide. Most full grown Canada geese weigh between 5 and 14 pounds and the females weigh slightly lesser than the males. Although Canada geese are known to be typically migratory, there’s a group of them that do not migrate, they are called non-migratory or resident geese. The resident geese stay all year round in the vicinity where it was born. The generations of resident geese always end up being resident geese themselves because they were not taught the flight path by their parents unlike the migratory geese.

Canada geese are naturally attracted to lawns and parks especially one with an open body of water. They prefer their habitats near the water but they can also survive in other habitats provided there is enough food for them. Canada geese are primarily herbivorous animals that feeds on plants and plant materials. When on land, they feed on a variety of grasses and grains. They are known to pick out foods from the streets and garbage bins. They also feed on insects and fishes. They are viewed as pests by farmers because of their herbivorous nature and destruction of pastures with their regular droppings. 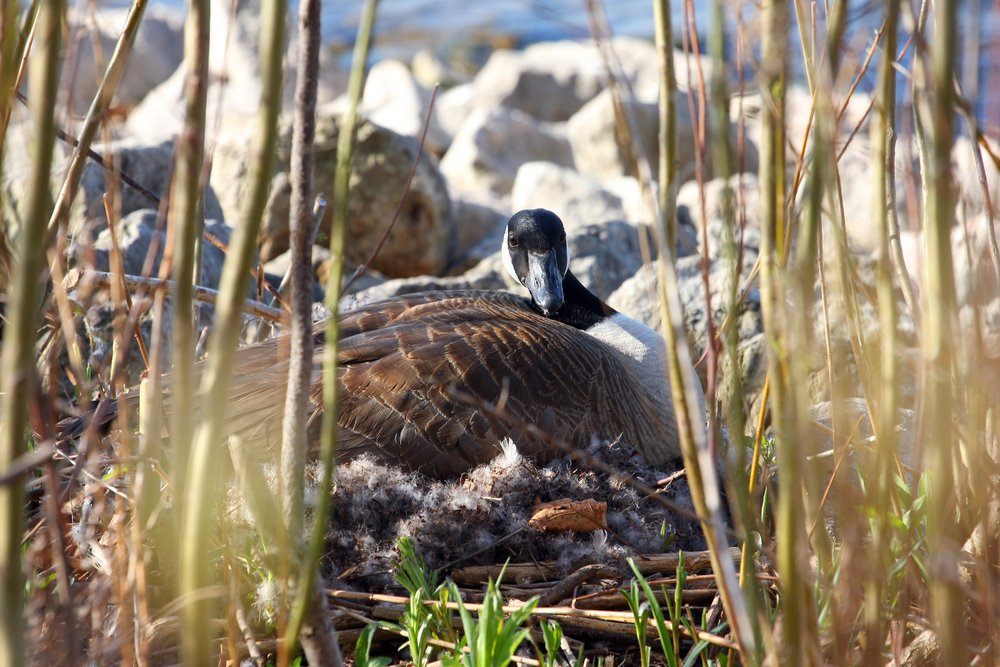 Canada geese starts to mate after they are about 2 to 3 years old. They look for a partner at that age and begin to mate with them. They are known to be monogamous and only mate with one partner. Except one of them dies, they don’t mate with another goose.

The female selects the nesting sites which they always prefer to be on elevated ground surrounded by bodies of water like lakes, streams, ponds etc.  This is so that they can easily spot predators ahead. The female geese builds the nest with plant materials like sticks, grass, weeds, twigs, moss and also from down feathers plucked from her body. The female goose lays an egg each day and lays about two to eight eggs, typically five. The female incubates the eggs and this might take up to 28 days. Within 24 hours the young goslings are already able to feed, walk, swim and dive. What the male does in this period is to stand and guard the nest from predators or anything seen as perceived threats to the female and egg/young goslings.

The young goslings are taught how to fly by the parents at about two to three months of age.

The goslings will begin to live independently after their first migration.

Some geese return to their nesting ground year after year to lay eggs and raise their goslings the exact same way with their mate. 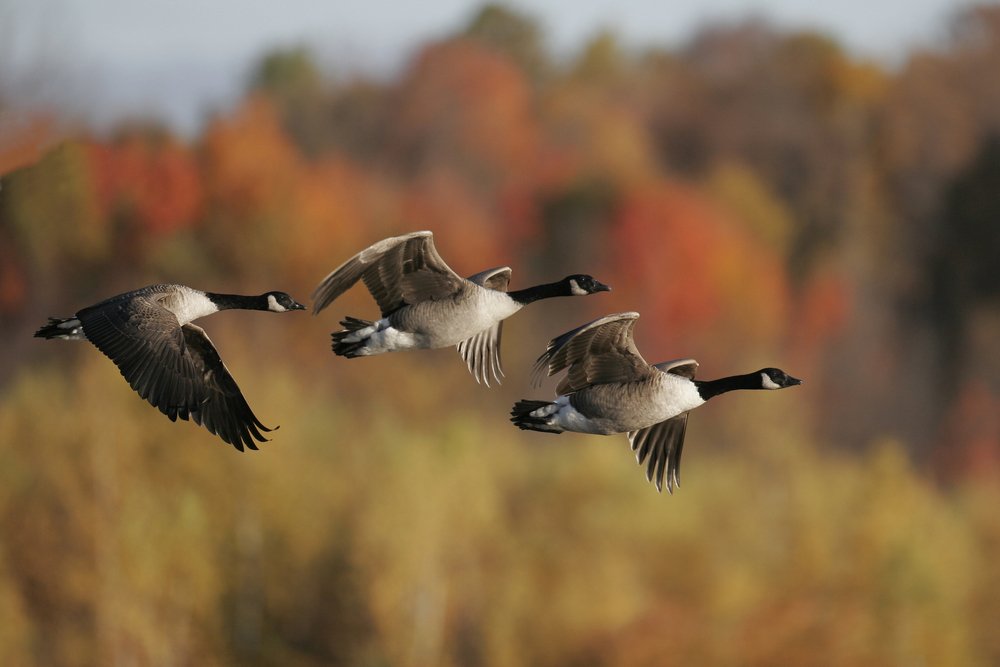 Canada geese are known to migrate seasonally. They need open water where they can dive for food and swim away from terrestrial predators. During the winter season, when the water bodies around them freeze, they travel from the north to the south to avoid the low temperatures and lack of food.

The peak fall migration for Canada geese begins by September through October and the beginning of November. They always fly back during the spring because they like to return to their place of birth.

The early migrants tends to spend less time at rest point and generally go through their migration much faster than the late migrants. The latter migrants spend more time at rest points. Most geese have resting areas where they meet up with others.

During their migration they fly in groups and they fly in a v shaped formation. One of them takes the lead upfront to break the headwind while the others fly behind and a little higher than the one ahead of them. Because it is very tiring being in the lead, they regularly take turns being in front to reduce fatigue.

Canada geese are known to fly at an average speed of about 40 miles per hour during migration but may increase their speed to about 70 miles per hour if they catch a strong tailwind especially when they feel threatened. They migrate as far as 2000 to 3000 miles and are capable of flying 1000 miles per day and up to 1500 miles per day if the weather is good. The flight ceiling for Canada geese is not known, they have been reported to fly at altitudes up to 9000 feet but typically they fly at altitudes ranging from 2000 feet to 9000 feet.

Not all Canada geese migrates. Many have taken up permanent year round residence in their habitats especially those in urban areas where there are no natural predators present, there’s all-round food supply and bodies of water (that may be man-made and warm enough to keep them from freezing during the winter. 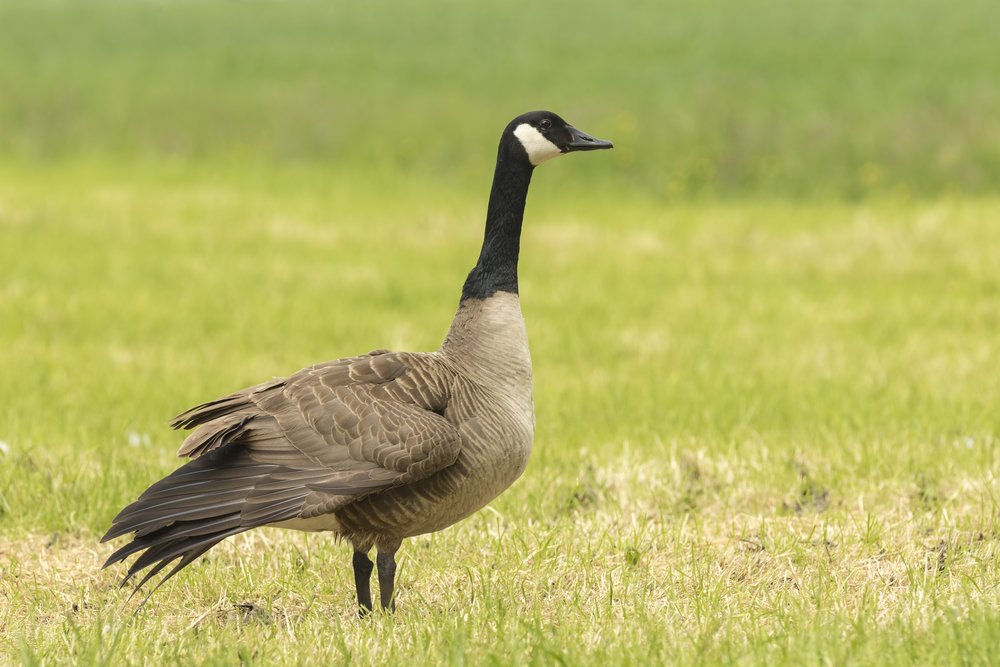 The head through to the neck of a Canada geese is black but they have a white strap on their chin which can be used to easily distinguish them from other goose specie. There are certain things that help in easy identification of Canada geese;

Many humans seem to view the Canada geese as an aggressive bird but this isn’t exactly true of them. Canada geese don’t just attack except they see it as totally necessary and the reason they attack is to protect their territory. The goose that is more likely to attack is the male goose and he does this during the period of nesting when the female is laying or incubating the eggs to protect the female and the eggs or hatchlings from perceived threats. They are only doing what they can to protect their family. They normally attack by biting, which doesn’t hurt much, and by whacking their large wings against their opponent.

The issue of attacks against happens due to their rapidly increased population. They lay their eggs on land and in human dominated places and many times humans tend to move into their territories even unknowingly. This territorial breach always provoke an aggressive response from them. It is also claimed that because of many years of interacting with humans they have become acclimatized to us and are no longer scared of humans.

Goose attack is not likely to cause any serious injuries but it’s better to avoid it anyways. The best way to avoid an attack by a goose is to not appear as a threat and stay away from their territory.

5. What To Do When Under A Goose 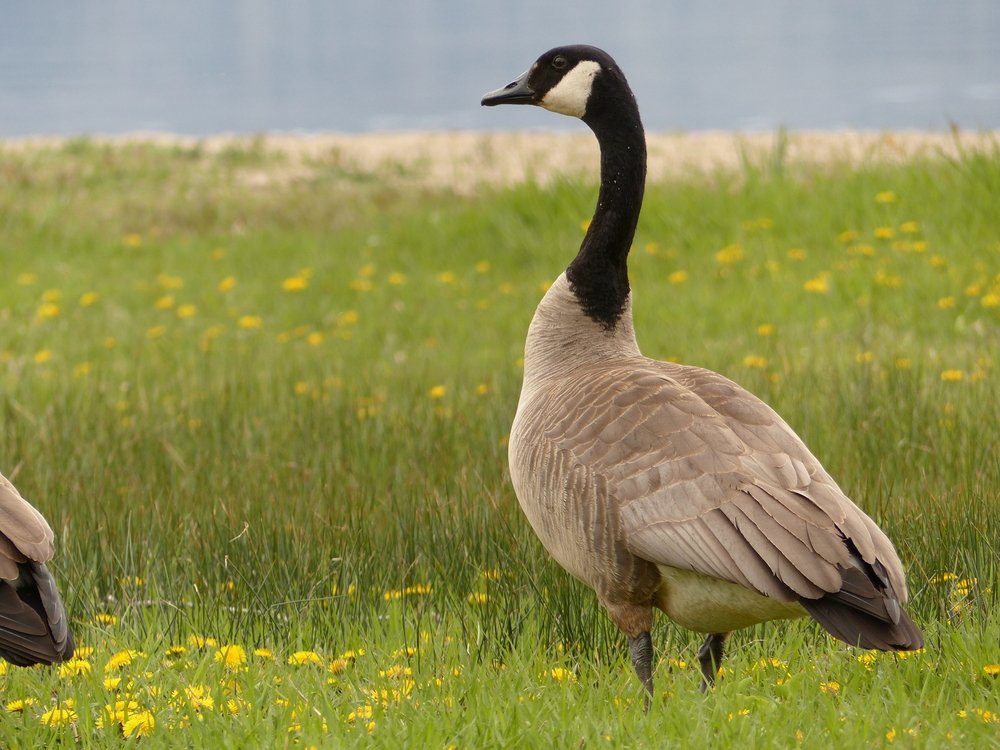 6. How To Avoid Geese Infestation On Your Property 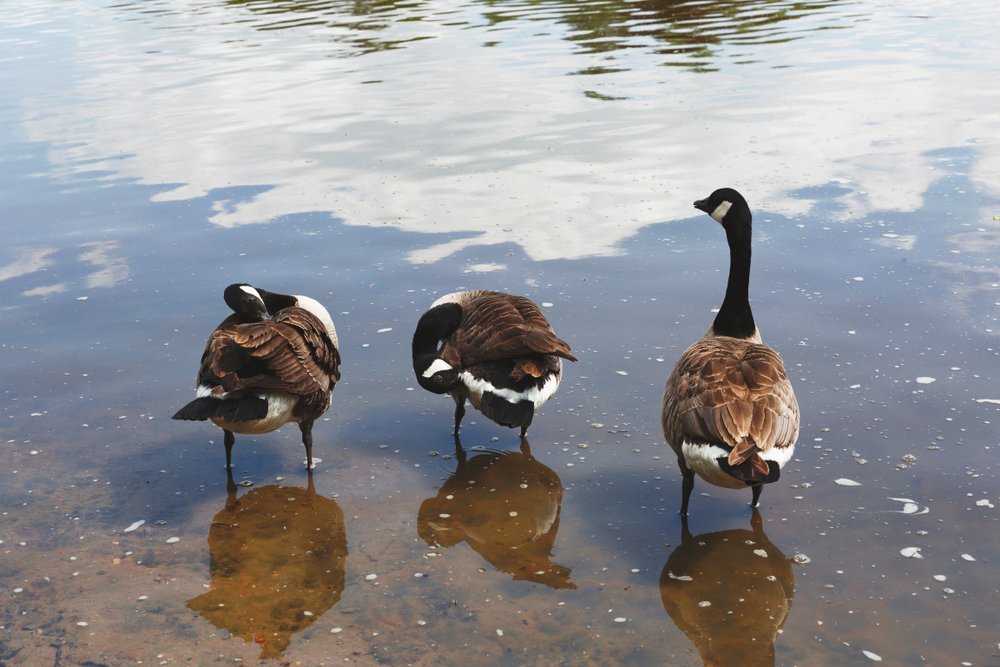 Do Not Feed Them

Geese are known to have developed a learned habit of begging from humans. Do not oblige them. Feeding them always causes their numbers to multiply and they become so much than the habitat would naturally allow. Feeding them does more harm than good because human food lacks the proper nutritional value needed by the geese. Feeding them only causes them to congregate and this can be problematic because parasites and diseases tend to spread easily among them when they gather in large numbers. These parasites can cause health problems for humans. Their droppings are also always very much and this can be irritating, unsanitary and unsightly for humans. When the diets of geese are no longer supplemented and they have to depend solely on natural food supply, they naturally begin to reduce in numbers.

This might be unsightly but geese don’t like tall grasses either. Canada geese are tundra nesters that like to inhabit low vegetation around open water. Goose feel safe in large lawns where they can easily graze for food and sight potential predators easily. Geese feel threatened when the plants are allowed to grow by at least 6 inches and the number of new shoots produced is reduced.

Add Barriers to the Lawns

The use of barriers is much more effective when the number of geese in the area is low. Since geese don’t inhabit an area less than 30 feet wide, barriers can be used to break the land into smaller pieces less than 30 feet. This way the geese will not feel safe enough to stay because of an obstructed view for sighting predators. Shrubs and trees can also be planted as barriers to reduce the bird’s line of sight. They have to be planted densely together or in a staggered pattern rather than narrowly for it to be effective.

Use of Scare Tactics

There are quite a number of typed of things to use to scare them away. Some of these are;

If all of these don’t work and they continue to be an irritant to your environment, you can get permits from government officials to legally hunt, shoot or injure them. 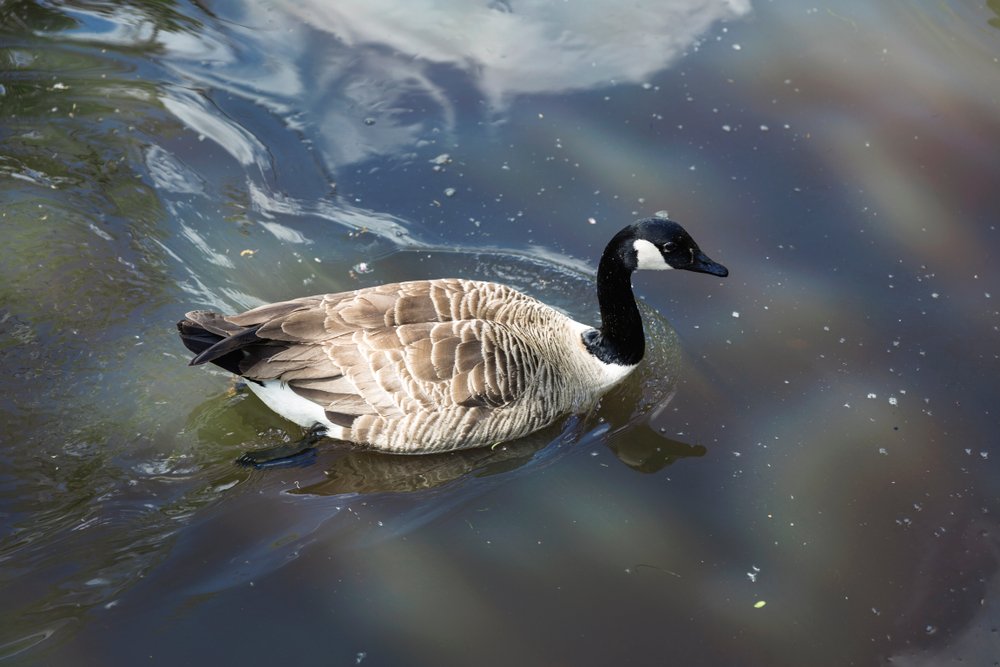