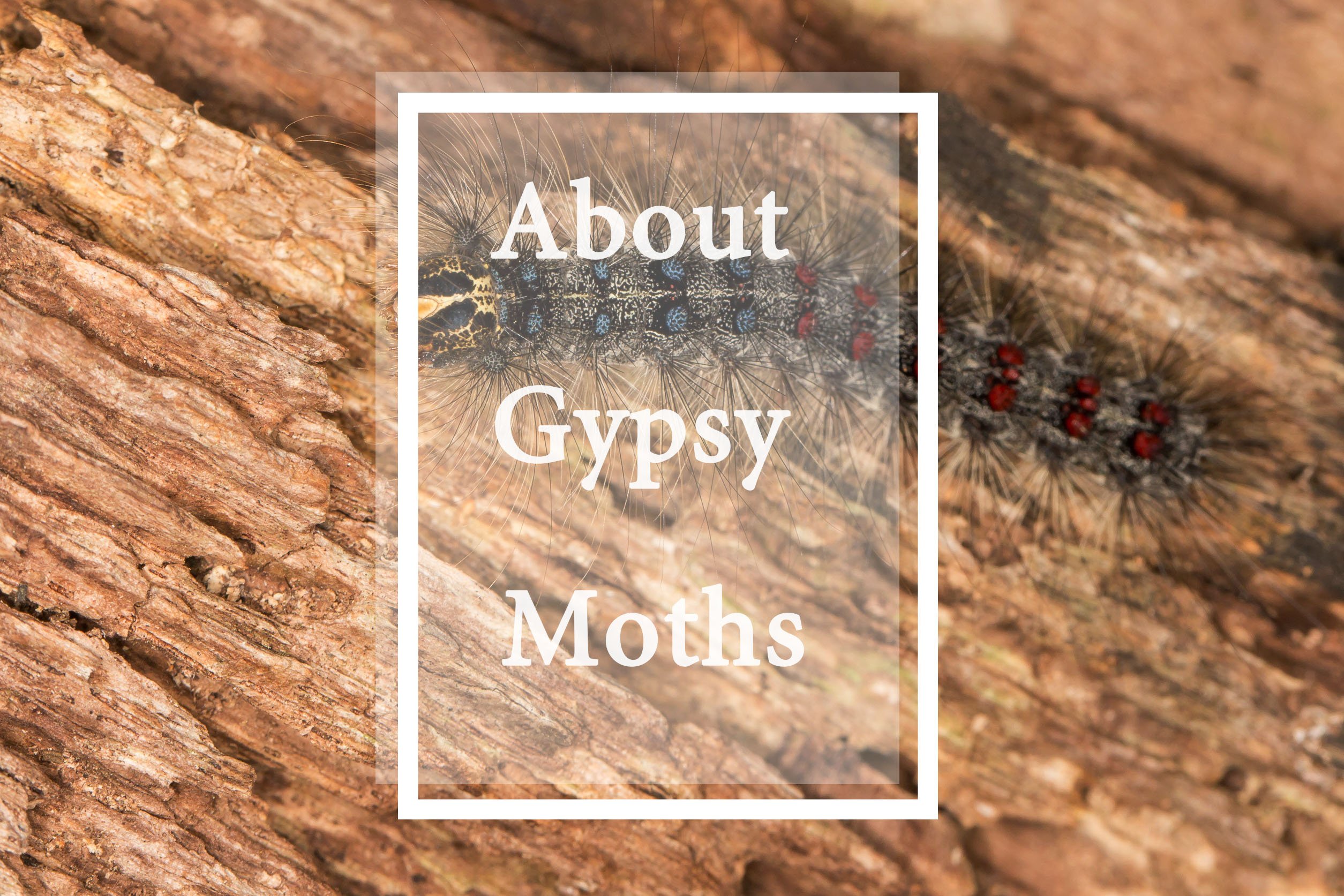 Everything You Need to Know About Gypsy Moths

The gypsy moth is one of the United States most destructive forest trees pests whose main targets are hardwood trees.  Their main sources of food are oak, maple tree, crabapple, willow, birch, pine, and spruce. Gypsy moth also is known as Lymantriadispar and has many common names such as European Gypsy moth, North American Gypsy moth and so on.

1. Origination and history of gypsy moth

The gypsy moth was brought from France by a French scientist, Mr. E. Leopold Trouvelot with an intention to introduce silk to North American countries. Earlier the country was using Chinese silkworm. Apparently, they had a lot of difficulties while handling the Chinese species so, they felt this was a much better choice and solution to make a replacement to Chinese silkworm. One of the main reason for the choice of the gypsy moth is because it feeds on leaves over 500 types of trees and shrubs whereas the Chinese silkworm were selective eaters. Hence, raising the Chinese breed was a pretty expensive process and required a lot of attention to care.

The scientists were able to make millions of gypsy moth caterpillars in a short span of time and they were utilized with protective measure at Medford, Massachusetts. However accidentally due to windstorm, these creepy little insects escaped and turned as a great devastating forest pest. In a period of ten years after their escape, they multiplied rapidly and became a real nuisance to the neighborhoods of Trouvelot. Especially when the weather becomes warm and spring sets in, their population exploded and the leaves in the trees were completely devoured. These symptoms indicated the emergence of gypsy moth, apparently, in a few years’ time interval, they spread in many parts of Central America and Canada.

The invasive worm the gypsy moth is an insect of late spring and midsummers. There are three species of gypsy worms European, Asian and Japanese gypsy moth. 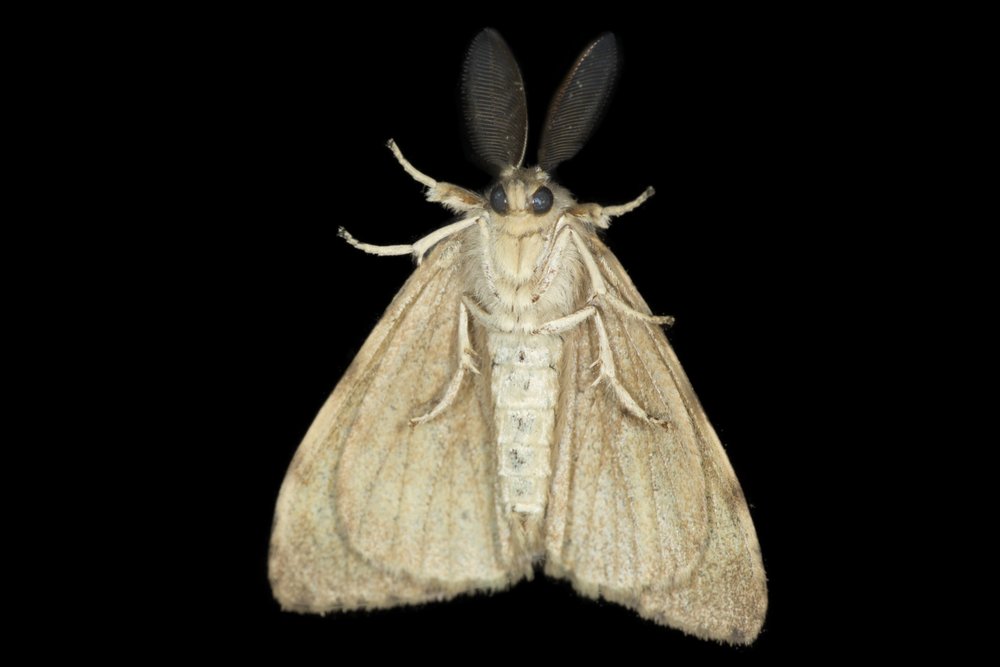 The caterpillars have hairy structures that have bundles of bristles over their head and you can notice two lines of colored warts(zig-zag markings) that run through the length of their body. Male gypsy moths are darker and smaller than the females. Similarly, the wingspan of the male is small about 2 inches in length when compared to female moths which have a wingspan of 2.5 inches long. Female moths are bigger in size with wider abdomen and thin antenna. The male moth has a longer antenna that helps to find the location of the females with their scent.  Newly born larvae are generally black however when they grow they start to develop tufts of hair with colored spots over their body. Few of the other dissimilarities between the male and female is, female are usually white in color while male moths are dark colored. Another significant difference is, female moth are flightless insects while male moths fly around and locate the females for mating.

The Asian gypsy moth is an exotic species found in Far East countries such as Russia, Northern China, Korea and Japan. Some of the common difference between European and Asian gypsy moth can be discussed in brief.

The Asian gypsy moth is known for its aggressive defoliation characteristics.  Although the Asian gypsy moth has a similar appearance and habitat like European gypsy moth, the DNA test proves them that they are of different species. In addition, Asian gypsy moth prefers more on forest habitats rather than urban trees. If these species settle in the United States, then it is for sure that it can cause more devastation to the forests because the country has larger areas of woods than the Asian countries.  On an average European gypsy moth cause destruction of about 4 million acres each year which is worth millions and billions of dollars of loss every year, if it is the case of Asian gypsy moth then this number would be considerably higher. This is evident from many studies.

Another important difference is their flying potentials. European female moths are flightless creatures while Asian female moths can cover up to a distance of 20 miles. So it has an extensive and aggressive potential of causing damage to larger distances. Some of its species were found in California, Texas and many states in Washington but it is believed that most of their population were completely eradicated because their presence was detected early. Hence this was made possible.

Japanese gypsy moths are also natives of Asia. It is a native pest found in the variety of hardwood trees. They belong to the family Lymantriadispan Japonica, these species leaves no ambiguity in identification. This species was discovered by Victor Motschulsky in the late 19th century. Since then, their population multiplied and now in the current era, they are found in all major islands, Honshu, Shikoku, Kyushu and many parts of southern and western Hokkaido. The location of the eggs of this insects varies from each other.  The Nara prefecture species lays eggs high in the top of the tree whereas Gumma prefecture prefers to lay the eggs 60 cm from the ground. Apparently, on a larch plantation, eggs are generally laid below 1m on the trunk.

Gypsy moth undergoes four developmental stages, a complete metamorphosis. Egg and the pupa stage appear as if they are lifeless however they undergo extreme changes that happen internally. Apparently, during the larvae stage, they accumulate lots of fat. These fatty substances are utilized when the adult moth does mating during the reproduction stage.

– Egg stage of Gypsy moth (The overwintering stage – Gypsy moth usually lay their eggs during late summer generally during July or August.  The female adults lay hundreds of eggs during every breeding season nearly 1000 eggs on tree trunks and branches or any sheltered places that include rocks, firewood logs, foliage and car tyres. Although the larvae develop within a months period, yet the hatching period is eight to nine months.

Within less than a month, a tiny larva is formed and they are ready to hatch. However, during winter months, these egg masses go to a diapause stage. A diapause is a form of developmental arrest in insects, so during this phase, there will be no significant growth or movement in the egg masses. Many experiments were conducted to examine the growth of the embryo during this diapause stage in gypsy moth. The results revealed that, when eggs were exposed to 5 degrees Celsius and below, their metabolic activities comes to complete shutdown because of the cold weather. As the weather slowly becomes warm after the winter months, the larvae which are inside the eggshell chews the shell and comes out.

– Larva Stage of the Gypsy Moth (A feeding machine – Once they hatch out of the egg masses, it enters the caterpillar stage. The caterpillar of the gypsy moth can be distinguished from the caterpillar of other insects because they possess distinct characteristics.  Gypsy moth caterpillars are also called as exfoliating pests. They strip leaves of the deciduous trees, the general feeding starts from outer edges of the leaves towards inwards. It leaves nothing but only the skeleton which was once a nourished healthy leaf.  Before they start with their feeding, they undergo a process called ballooning. Ballooning referred to as kiting is a phenomenon, in which tiny insects travel in the air by releasing threads. It causes them to become airborne due to the properties of the air current. As the caterpillar falls due to air current, it releases some form of silk thread to climb up to the branches.

Gypsy moth caterpillar eats the mammoth amount of food for their size, they can chomp around one square foot of leaves per day. As a result, they excrete a large amount of fecal every day. They do not kill trees directly, however, defoliate them. Severe defoliation often results in vulnerable infections to the trees and ultimately leads to the death of the trees.

The most common trees that get highly infested with gypsy moth caterpillars are birch, willow, crabapple, spruce, and pine. You could have heard from tree owners about their major attacks. Their yard covered with dead and chewed leaves. Often it becomes impossible to clear them when the population is uncontrollable. During such instances, the tree’s owner generally cut down the branches of the trees or burn them with fire. Usage of pesticides containing Bacillus thuringiensis is effective in control their growth and reduce their population.

Pupa Stage of the Gypsy Moth (The Transformation Change)

While in the pupal stage, they undergo a transition phase called metamorphosis. Metamorphosis can either be complete or incomplete depending on the animal. Apparently, with the case of gypsy moth, it undergoes complete metamorphosis.  Metamorphosis is a phenomenon in which the larvae or caterpillar undergo tremendous changes to become an adult moth.

Caterpillars when completely grown after two months of feeding, they find a sheltered place for hiding against the predators and start with their pupal stage. Many insect predators and opportunistic spiders love to prey gypsy moth caterpillar or pupae when they are available and seen visible. White-footed mice are the major threat to gypsy pupae so, many tree owners consider this animal as a reliable predator to get rid of this pest. Gypsy moth pupa is generally dark brown in color with hairy structure.

Gypsy moth are nocturnal insects, they prefer to wander around during night time. So the mating happens only at night. The male gypsy moth is generally attracted towards their female partner with their scent not unlike butterflies that get attracted with sight. The long antenna in the male adult gypsy moth has a strong sense to the scent called pheromones released by the female moths. The mating happens with their abdomen.

They get attached to each other’s abdomen and the male insects use the clasper to hold on the female moth. During mating, the male partner releases spermatophore through their penis to its lady love in the form of a sac. The female moth stores the sac in their abdomen and their reproduction begins from there. Moths are polygamies, female mate with a number of male partners before laying their eggs. The female moth lays one egg masses which constitutes about 600 to 1000 eggs.

7. How to get rid of this creepy little insects?

Gypsy moths are destructive pests that have the potential to completely strip the leaves if left untreated. Some of the common techniques to keep this pest under control

Gypsy moth causes severe devastation to the forest trees and shrubs. Apparently, there are ways to manage their infestation. If they are population is low, you can easily get rid of them by destroying their egg masses. However larger infestation can be controlled using any of the above-discussed methods.