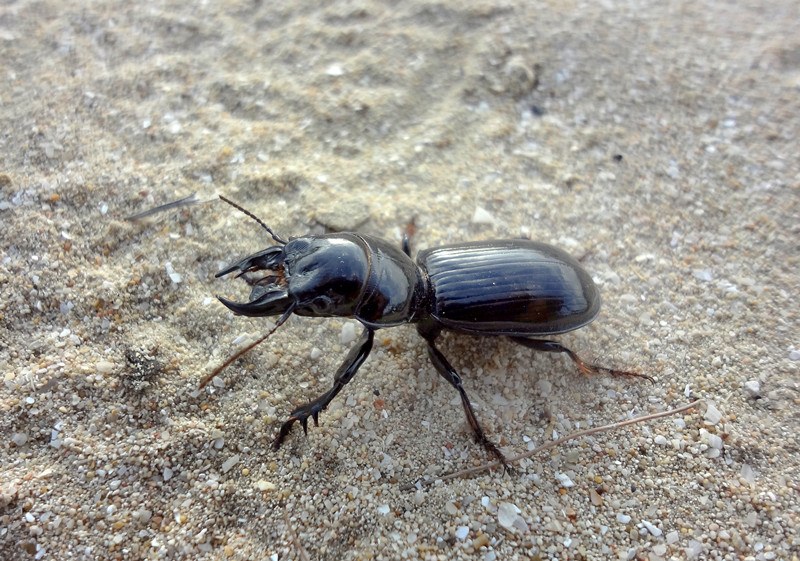 Ground beetles are a huge family of Carabidae beetles that has over 40,000 species that are spread all over the world. This makes it among the top ten largest families of animals and the top three largest insect families. Ground beetles comprise a major portion of North American fauna. Carabidae are different from Staphylinidae family because Carabids have 6-segmented legs while Staphylinidae has 5-segmented legs. A black ground beetle is probably the most known member of this family who feeds on other insects and soft-bodied herbivores as well as caterpillars. In addition to ground beetles, foliar predators are also in pursuit of these caterpillars and herbivorous insects. When these two predators hunt together, all sorts of herbivores drop. This makes the herbivorous insects fall from the proverbial frying pan, straight into the fire.

Most of the adult ground beetles have shiny metallic or black colors and are equipped with tough elytra. Due to these heavy elytra, they are unable to fly, and this makes them the ultimate soil-dwelling predators. All Carabid beetles, excluding the flanged bombardier beetles, are equipped with a groove on their foreleg tibiae which bears a hair comb. They usually have long legs and can run fast. Ground beetle larvae which are also known as Carabid larvae are hairy and have long legs. The adults are not equipped with ferocious physiques, but they certainly built for speed.

Where Do They Live?

As ground beetles have nocturnal nature, they usually live under the logs as well as the bark of trees and among the rocks. They are also found in the sand on the edges of rivers and ponds. Organic mulch areas, pine straws, weed and wood chip piles and brush piles, as well as any dark or humid places, are ideal places for their nest sites. They like to hunt in relatively sheltered environs and look for other small insects. 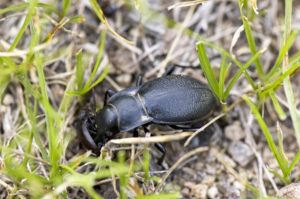 What Do They Eat?

Most of the ground beetle species are carnivorous, and they eat invertebrates or any sorts of prey they can overcome while some of them also eat pollen, seeds, and berries. Some of them have the ability to run quickly like tiger beetles. The Promecognathus longissimus species of ground beetles hunt cyanide millipede by countering hydrogen cyanide which is poisonous to most of the carnivores. So, they live in a bug-eat-bug world essentially, and for this, they need to have different tools they can use. The females lay their eggs underground where the non-descript larvae will feed on the subterranean insects during winters.

What Kind of Habitat Do They Need?

Ground beetles have the tendency to live in any habitat where they can find other smaller animals so that they can feed on them. Mostly they are very diverse and can be found in forests, on mountains, on seashores, and in deserts as well. Hence, they can survive in any habitat as long as there is an abundance of food available to them. They have a very unremarkable appearance and reclusive tendency, and due to this, they are not very much noticeable until they do the digging and their tracks are found.

What Eats Them and How Do They Avoid Being Eaten? 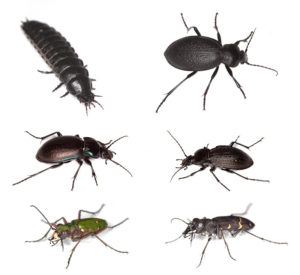 There are some known predators of ground beetles. These include spiders, toads, ants, lizards, ground-feeding birds, moles and other larger beetles. To avoid being eaten, they are equipped with long legs to run from the danger. They also have very tough elytra to protect their delicate bodies. Many of ground beetles also give off a bad-tasting chemical. Bombardier beetles have the ability to shoot hot, poisonous chemicals from the glands that they have on their abdomen.

As mentioned above, they live in a bug-eat-bug world, and they need to have some essential tools to fend of predators. Ground beetles have a pair of pygidial glands close to their abdomen. These glands can produce caustic and noxious secretions that serve as a defensive weapon to ward off predators. Within the bombardier beetles, these glands also produce some volatile compounds. The secretions are ejected with a tiny combustion and a loud popping sound along with a cloud of acrid and hot gas. This can injure animals particularly of small size like shrews.

As ground beetles are predators of invertebrates, which include many pests, they are considered to be beneficial insects for humans. Caterpillar hunters are popular for devouring a good quantity of prey including tussock moth caterpillars as well as wooly worms. In 1905, gypsy moths were also controlled in New England by importing large numbers of forest caterpillar hunters. Some of the species of ground beetles are also considerable pests as they cause some damage to standing crops of grain. During camping in forests, these beetles can use their defensive secretions when threatened by humans and can also spoil food. Due to their various coloring and patterns, they are also an object of collections and study for research. The exotic specimens are very highly priced.

Most of the species of ground beetles are considered to be beneficial as they are useful in controlling weeds and pests. The only problem they cause is when they are large in numbers, and they move indoors. In some cases, they might enter the buildings in large numbers and may cause panic, however; there is no health concern for the humans. Some of the species of these beetles feed on crop seeds and may become a concern as major crop pests. Different types of beetles can cause damage. There are food-infesting beetles, wood-destroying beetles, and fabric-infesting beetles.

How to Get Rid of Ground Beetles in Home

Ground beetles can cause a few problems if they have access to food. Because they have the ability to live and survive in any habitat and they also have the tendency to use their defensive secretions, the use of regular insecticides to get rid of them will not be an ideal solution. Before you can use any insecticide, you may want to apply Biden granules for extra effect.

1. Vacuum and Clean the Area Where They Located

Make sure that you have removed all their hiding spots. Get rid of the debris or any garbage from your house, your backyard and your lawn as well. You need to clean those areas with chemicals so that small bacteria or any other insects are not developed. Ground beetles feed on these insects.

All potential entry points must be sealed off and weather-proofed. If any cracks remain within the walls, windows or doors, then insects will develop within those cracks and ground beetles will find both food and shelter in those cracks.

4. Move any Lighting or Change White Lights to Yellow Ones

Ground beetles prefer bright lights, and this is why you need to change you indoor lights from white to yellow. Using white neon lights will help in reducing their presence.

Using top quality repellants is a must for you if you are to control the ground beetle infestation. Low-quality repellants might make them release their defensive secretions which I itself is a very discomforting experience.

The Delta Dust Multi Use Pest Control Insecticide is very popular because it is very effective in controlling the ground beetle infestation. A bottle of this insecticide contains 1 lb of chemical which is enough to cover 2000 square feet of area. It is equipped with Deltamethrin with has the tendency to repel all kinds of pests including ground beetles.

The Home Pest Plus Germ Killer from Bayer Advanced is equipped with the capability of killing all sorts of insects as well as the germs that are left behind. The common indoor pests are killed within seconds, and it can also be used as an outdoor barrier treatment. This insecticide is equipped with Sodium O-phenyl phenate and beta-Cyfluthrin.

Cutter Backyard Bug Control Spray is another pump sprayer solution to control persistent home intrusions. In addition to ground beetles, it is also designed to kill mosquitoes and various others pests. A single spray bottle can last all summer, and a single spray can last for up to 12 weeks. It comes with a hose end sprayer bottle that is designed to get connected with a hose and then you just need to turn on your water and spray.

Ground beetles are considered to be beneficial, however; a large number can cause panic and discomfort. Too many ground beetles can cause some issues within the households, and for this, you need to get rid of any food supply for them. They have the tendency to live and survive in any habitat. The only way to restrict them is to remove any hiding spots for them. They tend to hide in dark places which serve to be their perfect winter getaways. Numerous insecticides are useful in this regard. To control the ground beetle infestation, you may need to seek expert professional advice from your local extension offices.