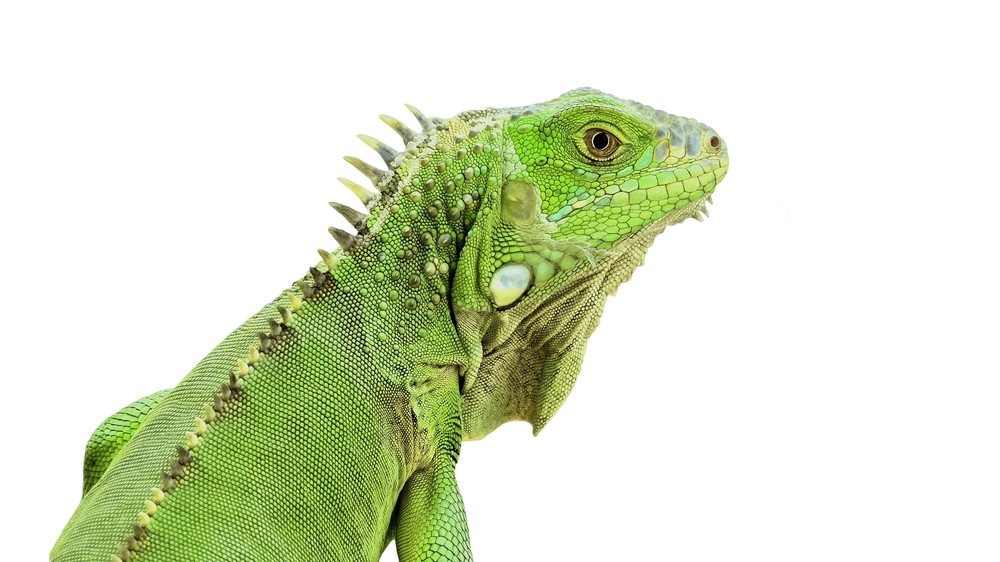 Green Iguana or the American Iguana is herbivorous, large arboreal lizard species and is related to genus Iguana. Usually, the animal is simply called as Iguana and is found on the islands as well as rain forests of Central America, Caribbean, and South America. Green Iguanas are considered to be invasive species. They are not only the largest lizards in the American continent but are also very popular reptile pets because of their calm nature and bright color. Despite the fact, it is tough to take care of these animals purely because of their diet. Due to this, most of the iguanas die within the first year when kept as pets and a major portion of the owners give them to the animal rescue services.

All Iguanas have a stout build, and this gives them kind of a clumsy look. However, they are pretty swift both on land and in water. They are equipped with adamant jaws as well as pointy and long tapering tail and razor sharp teeth. Their pointy tails make half of their body length and serve as a whip to keep the predators away. Interestingly, they have immovable upper eyelid and have laterally situated eyes and even more interestingly, they have the ability to detach their tails if they get caught or tangled and will grow it later without any issues at all. Green Iguanas can grow up to 5 feet (approximately 1.5 meters) in length from the head to its tail. However, some of these animals have also grown to a length of nearly 7 feet as well. These animals can weigh up to 20 pounds or over 9 KGs. Because they are large arboreal lizards, they can easily survive a fall of up to 50 feet. 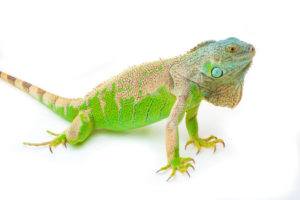 Primarily, the Green Iguanas live on high trees of rainforests and are herbivore in nature and usually feed on an extensive range of greens including leaves of turnips, collards, dandelion, and mustard. Among the favorite foods of Iguanas are butternut squash, parsnip, and mango. They also eat fruits, growing shoots, and flowers of different plant species. Young Iguanas often feed on the feces of the adults so that they can acquire the essential extracts to digest their hard to process, vegetarian diet. In rare cases, the wild iguanas also feed on tree snails and grasshoppers which serve as a byproduct after eating plants. Green Iguanas have also been witnessed to eat eggs of birds as well as mice and dead fish.

Green Iguana’s native range spreads across Central Brazil to Southern Mexico. It is also found in the rain forests of Dominican Republic, Caribbean, Bolivia, and Paraguay. Within the Caribbean islands, it is specifically found in St. Lucia, Trinidad and Tobago, St. Vincent, Utila, Curacao, and Grenada. Green Iguanas have also been introduced to other regions including Florida, Texas, Hawaii, Puerto Rico, Grand Cayman as well as US Virgin Islands. Due to a hurricane in 1995 Iguanas were colonized in Anguilla and a small colony of iguanas also escaped to Fort Saint Louis. Green Iguanas are mostly found around the water and are arboreal creatures but are excellent swimmers as well. Due to this, they can survive a fall of over 50 feet and are very agile climbers and have the ability to switch between trees while warding off natural predators. In order to break a fall, they use their hind back claws to grip on the branches and leaves.

Iguanas are tropical lizards with cold blooded nature and lay eggs. After mating, a female iguana starts digging a burrow for the purpose of building her nest. In her burrow, she lays eggs after about 1 and a half month after mating. Only a fraction of the 40 to 50 eggs that are laid will survive out in the wild. The hatchlings will emerge after 8 to 10 weeks. After this period the hatchlings began to appear from the eggs. The process can take up to a week until all the hatchlings come out of their eggs. The one week process of hatchlings coming out of their eggs is very patient one because they have to go through a resting phase each time they make an effort to make a crack in the shell of their eggs. As the hatchlings come out of the eggs, the yolk sack remains attached for a couple of days as a food source, and after that it falls off, turning the hatchling into a baby iguana. The babies will turn into adults in a couple of year’s time. As soon as a baby turns into an adult, it will become ready to mate, however; a female iguana may take an extra year to breed because they need more calcium reserves for this purpose. These lizards can live up to 30 years.

Unfriendly iguanas are not known to make any sound or bark. However, they do show some signs as a warning. Iguanas use their dewlaps to communicate; they use their extended dewlap to greet each other, and it is also used as a territorial sign by an unfriendly iguana. They also mark their territories and their females with waxy pheromone containing the substance. This dewlap can also be used as a form of protection from predators where it appears to be larger than its actual size. These animals use their extended dewlaps to adjust to the temperatures of the surroundings. The species also do head bobbing when they are sending a message that they are in charge of the situation. Slow bobbing means that it wants you to know that it knows you are around. Quick bobbing is a sign of aggression, and it is feeling agitated. Iguanas also flick their tongues to get information about their surroundings. In addition to this, an iguana also sneezes, which is quite normal behavior. Tail whipping is also one of the most obvious body signs of iguanas. Before they have a crack, they often twitch it or wag it, and this might be in combination with the dewlap signs as well.

Beside Green Iguanas, there are numerous other kinds of iguanas as well which are,

Chuckwalla Iguanas are also large lizards found in the southwestern regions of the United States as well as northern regions of Mexico. While some of them are also found on coastal islands.

The Desert Iguanas are one of the most common lizards of Mojave and Sonora deserts located in the northwestern Mexico and the southwestern United States. They are mostly of tan and gray colors.

Land Iguanas are also known as Galapagos Land Iguanas and are found in Galapagos Island. They are easily identifiable due to their spiny crests on their backs.

It is another kind of Galapagos Land Iguana and is only found on this island and is equipped with a unique ability to dive up to 9 meters deep into the water.

This iguana is also known as Ctenosaura or black iguana and is found in the jungles of Costa Rica, Central America, and Mexico. This species has been recently introduced in the state of Florida.

Rock Iguanas are only found in the Caribbean Islands. They are very restrictive regarding their natural habitat, and due to this reason, all subspecies of rock iguanas are considered to be endangered. 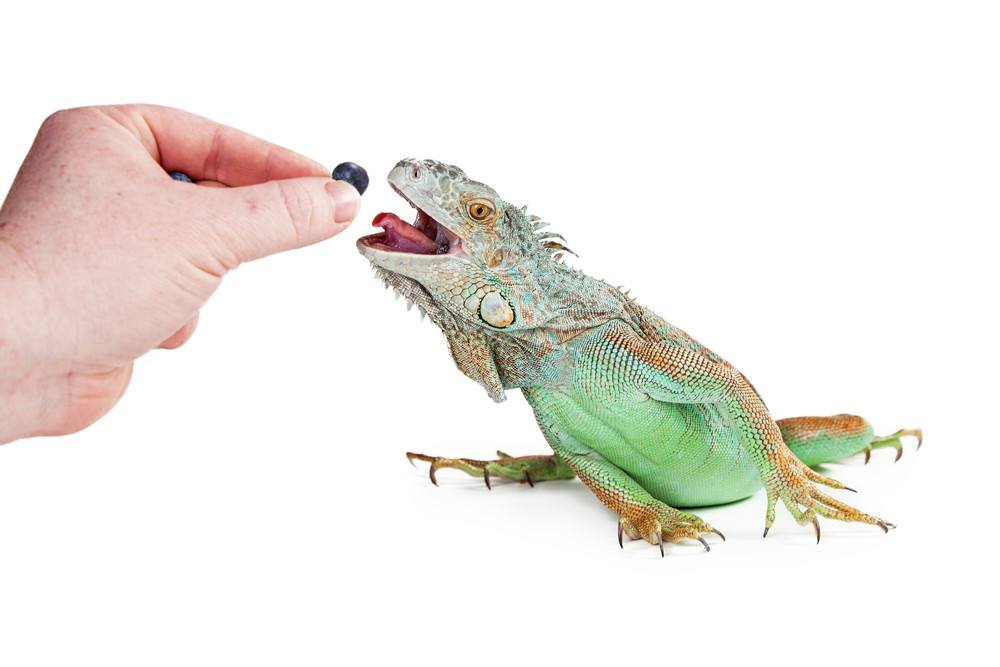 In the recent times, the pet trade in American has seen an increased demand of Green Iguanas, and they are originated from their captive farming activities in the native countries. Nevertheless, these creatures demand a lot of caring during their lifetime, and many of them lose their life within the 1st year of their life. Green Iguanas or captive iguanas do tend to eat meat which destroys their kidneys and may result in premature death. A captive iguana’s diet ideally should be kale, mustard leaves, dandelion leaves and collard leaves and they should be provided with fresh water. The ideal body temperatures for these creatures are between 26°C and 25°C due to the particularly due to the green iguana skin.