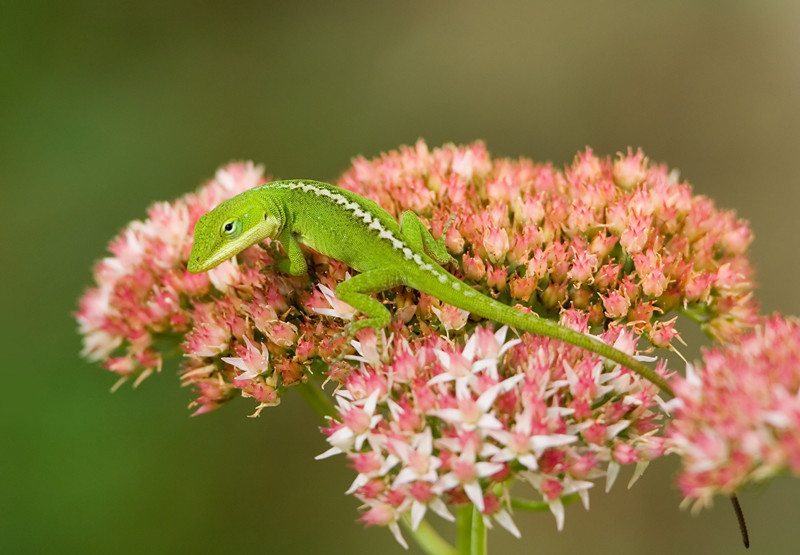 Now, there are quite a lot of different types of lizards that you might want to be interested in, but the green anole lizard is one of the most fascinating species. There are different interesting characteristics which make this particularly little type so curious so let’s go right ahead and take a look.

This is an arboreal lizard which is mostly found in the southeastern parts of the United States. However, it has also been known to live in certain islands in the Caribbean. There are quite a lot of different names that you might come across this particular type, some of which include the Carolina anole, American green anole, red-throated anole, American anole and others of the kind. It has the ability to change its color from different shades of brown to bright green. This is why it is also sometimes mistaken for the chameleon, even though that’s pretty much all they have in common. Now, let’s go right ahead and take a closer look at some of the specifications when it comes to it so that you can have a general idea of the important things for the species. 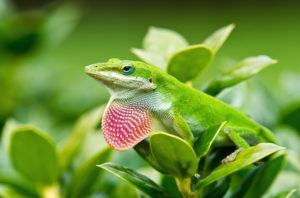 It’s worth noting that this is considered to be a small to medium-sized lizard which has a body in a slender shape. The head is particularly long and it is pointed with ridges which are between their eyes as well as their nostrils. They are also rather small and are located right there on top of their head. They have toes with adhesive pads which are specifically designated to conveniently facilitate climbing. Going further, they also exhibit sexual dimorphism. This means that the male specimens are known to be at least fifteen percent larger. This is also something that you can use as a differentiation characteristic.

Adult males are also about 12.5-20.3 cm long and about 70% of this size is comprised by their tail. In actuality, their body length isn’t going to be more than 7.5 cm. It is also important to take into account their coloration as well as their color morphs. Their regular color could range from brown to green and they can change it just like quite a few other types of lizards out there. However, it is also important to note that these are not chameleons and they are not iguanas, even though they appear to be closely related – this is something that you want to take into consideration.

When it comes to the range and the habitat of female and male green anoles, it’s safe to say that the species are native to North America. It is found in the southeastern parts of the continent where it is usually warm. Keep in mind that that the green anoles are diurnal. This means that they are active throughout the day and not throughout the night like a lot of animals. When it comes to their range, however, it’s worth noting that they spread throughout a vast area. You can find them in South Carolina, North Carolina, Florida, Georgia, Alabama, Texas and Mississippi. 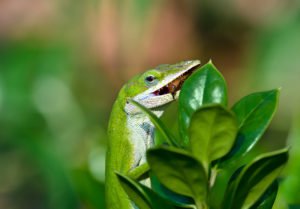 The Diet of the green anole lizard is usually going to consist of small insects. These could include crickets, flies, spiders, grasshoppers and other types of anthropoids. A lot of people are known to keep these lizards as pets. They would usually feed them with small crickets, maggots, grubs and with mealworms as well.  On the other hand, they are quite a few predators which threaten the green anole lizards and are part of their diets. These include snakes and birds mainly. Another particularly characteristic trait of the lizard is that their tail, similar to those of other lizards are autotomic. This means that they will continue moving after they are detached from the body.

When it comes to the reproduction, the breeding season is usually going to begin in April and it’s going to end in the late parts of September. With this in mind, it’s obviously safe to say that they use quite a larger chunk of the year to reproduce. During this period, the males are going to patrol their own territory. This is also the time of the year during which you will observe the most brilliant characteristics of the green anole as the males will try to impress the females to the best of their abilities.

Their behavioral characteristics are also pretty interesting. With this in mind male anoles are particularly territorial. This is something that you should know. Some of them are even witnessed to be fighting with their own reflections in a mirror. Furthermore, some of them are going to fight off other males in order to defend their own territory and the females. 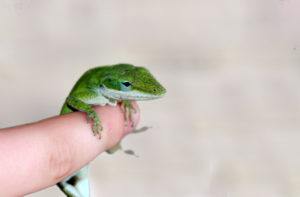 Of course, green anoles are also pretty common pets. This is due to the fact that they are rather easy to take care of and they are also not that pretentious when it comes to food. However, it is particularly advisable for you to take proper considerations when establishing their cage and to use the proper substrate in order for them to grow up conveniently and without any issues.

In any case, the green anoles are amongst the most interesting lizards to observe. There are quite a lot of different things that you might want to take into account if you want to take care of them as a pet. They make excellent companions but they are also rather temperamental when it comes to it so you might want to be careful unless you want to get bitten. It doesn’t hurt, but it’s not the best feeling in the world.