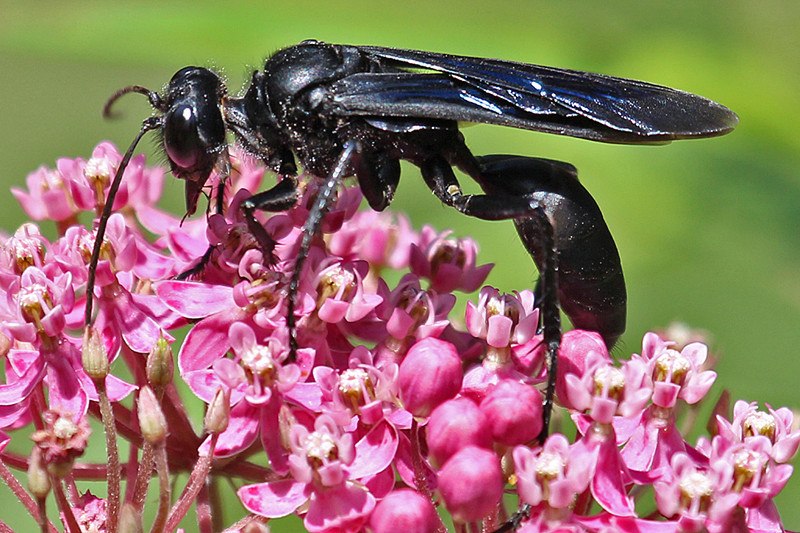 From the tiniest ants to the huge four-legged creatures, from the fascinating airborne birds to the water-dwelling beasts nature has everything for us. We do not just look at them but also appreciate the wonders of nature that make it look unique and fascinating. These animals, insects, and birds can be harmful or beneficial. The world of six or eight legged insects is extraordinarily unusual. These creatures that apparently seem too small have a world of their own. They can crawl, fly, or hop. They are abundantly seen living in the aquatic environment, in the air, and on the land. Not a single space on the globe is devoid of them. One such fascinating insect with two wings to fly is the great black wasp.

This category of bugs is biologically referred as the Sphex pensylvanicus. It belongs to the family of the digger wasp. These dark wasps are the most common creatures that are widely found across the North America. It has the size range from 20–35 mm. The living insects make the major portion of the food of the larvae. As the time passes the female wasps becomes slow and start shifting towards the nests that lie underground. The very first research article on these fascinating wasps appeared in 1749 at the Royal Society by Peter Collinson. Later the same was described in 1763 by Carl Linnaeus in Centuria Insectorum.

These wasps are comparatively larger in size and darker in color as compared to the other species of the wasps. The great black wasp is known for its mono-colored appearance. It does not have any stripes or spots covering its body. Its smoky wings distinguish it. In some cases, the yellow wings, red abdomen, and red legs are also reported in the wasps too. The adult females measure about 1 to 1.5 inches. These females are comparatively larger than the adult male wasps.

The major area of their existence is the Eastern and Central North America. If you ever go out in the open meadows or the fields that are filled with flowers the great black wasps are seen abundantly among the other insects including grasshoppers, katydid, and similar ones. Sometimes they hit the residential areas also that are rich in the flowering plants and have a plenty of gardens around. These flowering plants make a great source of food for the wasps.

The great black wasps prey upon the smaller insects sharing the habitat with them like the cicadas, locusts, and the grasshoppers. The fleshy insects also make their great food. They paralyze their prey in their mouth and then store it in their underground nests. The female wasps need a large amount of food that is rich in energy. To fulfill the energy requirements, they consider having the nectar of the flowers in their habitat.

The great black wasps have a unique kind of reproduction cycle. They kill their prey and use it for their reproduction. Their reproductive behavior makes them stand out among the other insects in their habitat. They prey on the insects like grasshoppers. Once the prey is killed, it is dragged into the nest underground. They remove their carcass and place it safely in the nest. This carcass is used for laying and protecting the eggs. The eggs and the newly developed wasps get the essential nourishment from the same carcass.

All the animals are blessed with the tendency to protect themselves from their enemy. Some animals do it on their own while there are others who need the protection of some other creature to repel the enemy. Unlike the latter and especially the colony wasps the great black wasps are great at defending and protecting them against their enemies. They are vigorous enough to do it on their own. By nature, they are not very aggressive. It is only the female adult black wasp that stings when herself feels in danger. These females sting only target the preys. The other reason for stinging is when they or their nests are in danger they react in the form of stings. If the situation is calm, safe and they are not provoked, they are not dangerous at all.

Further reading: how to treat a wasp sting? 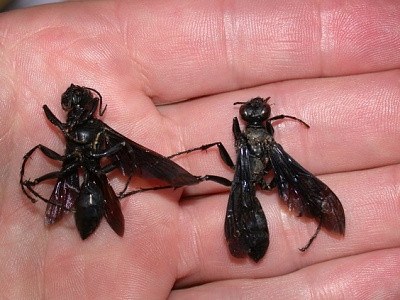 Wasps are a mixed blessing for the people. They are both good friends and the worst enemies. If not bothered or annoyed they will not cause any harm but otherwise they can result in severe stings and bites. The major role of a wasp can be studied in the light of their habitat. As they reside in the areas rich in plants and especially flowers hence it is the garden owner who can benefit from it the most. They are a real boon for the farmers, gardeners, and cultivators. They prey upon the insects that can be harmful for the vegetation like the locusts or the grasshoppers. Moreover, they are an excellent source of the pollination. The pollens of the flower get attaché to their body and then they are transported from the region of cultivation to the other.

They usually do not harm any other creature including the humans unless they are annoyed or threatened. The only reaction, in this case, is the sting. The bites are not venomous, but still, they are extremely painful. If you want to protect yourself from this unpleasant situation, it is better not to intervene in their lifestyle.

How to Get Rid of Great Black Wasps

The great black wasps are not very harmful; in fact, they are great predators and pollinators. If they start increasing, then they can be annoying. In that case of growing number, there are chances that you might get hurt or stung by them. It is better to get rid of them beforehand to avoid any unnecessary inconvenience. There are several ways to remove the wasps from your surroundings. You can seek the advice of a pest control expert to suggest you the most effective means of doing so. There are several chemical products available in the stores to control the black wasp. For people who avoid the chemical exposure, there are DIY ways of getting rid of the great black wasp. For this, you can conveniently search for the natural ways that can help you fight back the black wasps both inside the home and in the outdoors too. 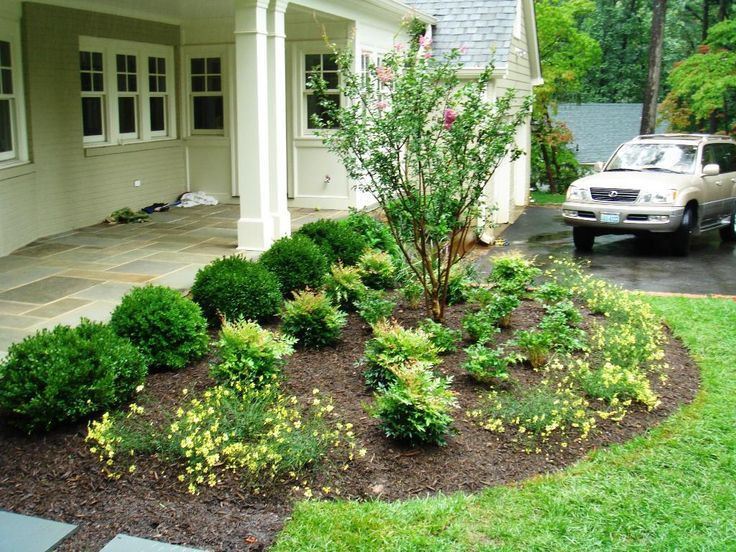 The great black wasps are abundantly found in the flowering and plantation areas. If you feel annoyed, then it is time to get hold of them. As they usually breed in the outdoors start controlling them there. Planning your gardens is critical. Don’t let unnecessary plants grow into the area. The number of the seasonal flowering plants can be checked. Let those plants grow that you need. While planting the herbaceous plants do not forget to grow the plants that are good at repelling the insects. Once these plants are grown along with the floral plants, it becomes effortless to keep away the wasps. Plant friendly repellents are also available in the pest stores that make it possible to get rid of the wasps without harming the plants and the flowers.

Usually, the wasps are not found in large numbers in the interiors. They try to stay in the outdoors, but if the number grows beyond a particular limit, they might bother you in the house as well. It is important to get the premises sprayed when summer is around. With kids and pets around the home, dwellers prefer to use chemical-free options. There are many sprays available in the pest control. If you want a safe option, it is advised to consult a pest control expert. Sticky tape traps are also great in this regard.  The wasps can easily stick to them as the pass by and then they can be easily removed. Create tempting nectar like a solution to trap the wasps. To do so, create a saturated solution with the help of the sugar and the water. Place it in a container without a lid or cover.

Due to the nectar-like aroma and taste, it will attract the wasps. As the wasps enter the container, they will be killed immediately. Take them away and remove them. Mix the lemongrass, clove and geranium essential oils in equal quantities. Once mixed well, add the oils to a bottle filled with water. It can be an effective spray for the indoors.

The great black wasps are the tiny yet harmless creatures. Their name might be alarming as it includes the name wasps, but still, they are not very dangerous. They do not attack until they are annoyed or they feel threatened. They dig the nests underground to stay and reproduce. The wasps make great predators and the pollinators. Thus, the wasps make a blessing in disguise for the humans and nature.