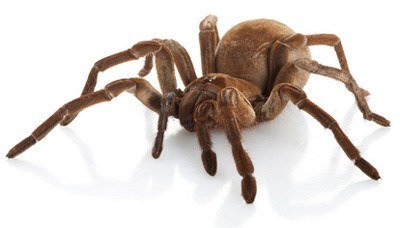 A fear of spiders is very real, and then these fears become reality when you cross the Goliath bird-eating spider. The mere sight of these spiders makes the hair stand up on the back of my neck, and at about the size of a puppy, these spiders are something out of science fiction.

Solitary in nature, these spiders will come out during your nighttime stroll, and they like to spend their time in the beautiful rainforests of the world.

The Goliath bird eating spider is russet brown to black in color and is a giant spider that’s part of the tarantula family.

These spiders are a colossal spider, that has a leg span of up to 30 centimeters (1 foot in length) and a weight of 170 grams, or a little more than 6 ounces. The fangs of these spiders are large enough to break a human’s skin, and they can be very defensive when they’re approached.

Faint markings may be found on the legs of the spider, and they can range from a dark to light brown color.

Active at night, these fearsome eight-legged beasts live in upland rainforest regions and can be found in several locations, including:

You’ll find this spider near marshy, swampy areas, and they live in deep burrows.

Female spiders will lay 100 – 200 eggs at a time, with spiderlings emerging after two months. Spider cannibalism isn’t practiced with this species, but the males have a lifespan of just 3 – 6 years and die soon after maturity.

Males often die a few months after mating. A maturation molt is required as the spider grows, and they will shed their old exoskeleton in the process.

Females will lay their eggs in a web, and then wrap them in a ball and carry them. Each of these sacs is capable of holding 70 eggs, and they will remain with the “mother” spider until they hatch.

This defensive spider will rub hairs together, or more accurately, they’ll rub their hind legs on their abdomen to release their fuzzy hairs that can be harmful to humans. These hairs will cause irritation and itching. The tiny barbed hairs will impact the mucus membranes, too.

These urticating hairs are just one of the three lines of defense this spider has.

Extreme pain and itching can last for days when you come in contact with these hairs, and their bites are very painful.

Goliath spiders have 0.75 inches to 1.5 inch fangs on average, but some are said to have two-inch-long fangs. Fangs and venom are a concern, but the venom of this spider is not life threatening. Really, the bite is of the most concern because it can break the skin.

Stridulation, or the hissing sound this spider produces when rubbing its hind legs on the abdomen, is so loud that it can be heard from up to 15 feet away.

If this spider is on the defensive, it will go on its hind legs and show its fangs as a way to deter predators.

In forms of social structure, these spiders like to remain in solitude and will only come together during mating season.

There has not been an evaluation of this spider’s conservation status, but scientists of the past have stated that they have a healthy population size. Since these spiders live in the rainforest and are known to be elusive in nature, they have plenty of prey to eat and stay far away from main predators – humans, in many cases.

Not really. Even with the perfect bite mode, these spiders do not see humans as potential enemies, and we shouldn’t see them as potential predators. Yes, there is spider venom involved, but researchers state that the venom is no worse than a wasp sting.

Any time you’re bitten by something with fangs that are an inch or longer, you can expect:

Scientists state that chickens pose a much greater risk than a Goliath birdeater, and you don’t hear of anyone being pecked to death by a chicken.

So, while your heart may feel like it’s going to beat out of your chest when you see one of these spiders, there’s no real threat posed to you. The spider can also choose to “dry bite,” which means it won’t inject venom into you.

But if you do get bitten by one of these massive spiders, you will want to keep a close eye on the wound, apply disinfectant and call a doctor if you notice any symptoms or side effects from the bite. The biggest risk is the potential for infection.

Infestation and control is not an issue with the Goliath birdeater spider. This solitary spider is rarely seen in the wild unless you’re on the hunt for the spider, so you won’t be overrun with them in your home.

And they don’t want to spend their days with humans.

Instead, this spider wants to come out at night and walk among the leaves, waiting for unsuspecting prey to come their way. Oftentimes, they’ll be seen eating insects or small mammals.