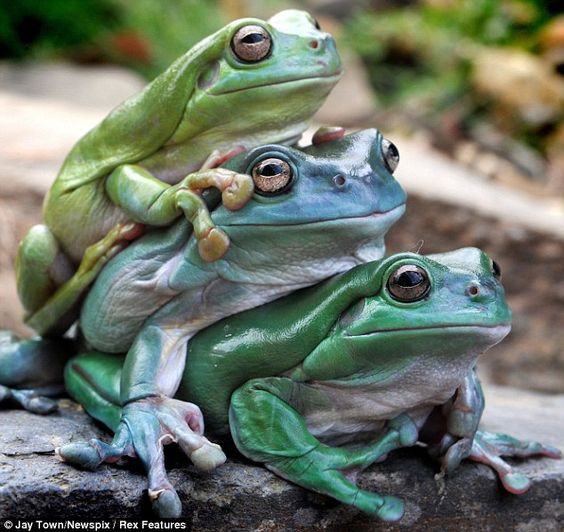 Frogs are fascinating – that’s just it. While it may be one of the most unpleasant animals to look, touch and interact with, it’s one of the most complicated creatures on earth. There is a tremendous amount of different types and all of them are pretty characteristic.

With this in mind, we have taken the liberty of taking a look at the most common types which are native to North America and the things that you should look out for in order to distinguish them. What is more, we are also going to provide you with essentially everything that you need to know about frogs. On top of it, we will take a look at 14 tremendously fun facts that you truly don’t want to miss out on. But more on that later. Now, let’s get down to the serious talks.

As we mentioned above, there are a lot more than just 6 species but these are amongst the most commonly encountered ones and the ones that you would most likely have to deal with. With this in mind, let’s not waste any further time and jump right into it.

The most common species and the most interesting ones include:

Undoubtedly amongst the most interesting frogs encountered in nature. The poison dart frog is actually a very popular name for a significant group of frogs which are from the Dendrobatidae family. They are native to the southern and the central parts of America. They are diurnal and have bodies which are covered in particularly bright colors.

This is something which should immediately ring a bell – the more colorful the frog is, the more poisonous it actually is. They are aposematic species and some of them have particularly bright colors. This means that they are very toxic. Others, on the other hand, have little to no coloration and hence, their toxicity is also not as significant.

Now, an interesting fact that you might want to know is that the toxicity of these species is usually derived from their diet. Those which are highly toxic are on a diet of ants, termites and mites. Other species which are far less toxic, on the other hand, are on a far more versatile diet. A lot of the species from this particularly interesting frog family are threatened because of the human infrastructure.

This is basically a term which refers to any species of frog which is known to spend the majority of its entire lifespan on trees. This is also commonly referred to as an arboreal state – a term used to describe overall tree specimens. There are quite a lot of lineages of frogs which have managed to give rise to this particular type, even though they are far from being closely related to one another.

The truth is that many millions of years of evolution have managed to result in ecologies and morphologies which are more or less identical. They are also rather similar in regard with their ecological niche that where there is one species, the other one is most likely to be absent.

Tree frogs, obviously, are mainly found in the trees and they are characteristic for regions with overly high-growing vegetation. They wouldn’t usually descend to the ground – the only reason for this is procreation. Logically, it takes place during their mating season.

As you may know, the wood frog is one of the most commonly encountered species of frogs. It’s so common and it’s found almost throughout the entire extension of North America to the southern Appalachians to the boreal forests. They are also rather popular in North Carolina.

Now, one of the most important things that needs to be said about the common wood frog is that it had managed to attract quite a lot of attention towards itself throughout the last few years. This scientific interest is mainly due to the fact that it has particularly high freeze tolerance.

This type of frog is also characteristic with its particularly sticky muscular tongue which is used to pull back and swallow food. They are usually encountered in damp places near swamps, ponds and other slow-running water sources.

The term leopard frog is rather general and it is used to describe the 14 species genus within the Lithobates. They are all usually colored in the same way – green as well as prominent black spotting which can also appear as a leopard pattern. This is actually where the name comes from.

They are usually distinguished by their distribution and behavior which is characterized with subtle, morphological and ecological traits. They are commonly found throughout the subtropical parts of North America. However, their habitat extends to northern Mexico as well. They can also be come across in Europe.

This is also commonly referred to as the giant slippery frog and it is by far the largest known living frog on our planet. The specimens of this particular type are known to reach 32 cm in length and they can weigh up to 3 kg. This is absolutely staggering, when you come to think of it.

This particular species is known to inhabit a small range of territories in Cameroon and in Equatorial Guinea. The numbers of the species are also going down because their habitat is getting deconstructed significantly. What is more, they are also collected for pet trade and for food. This is rather unfortunate as they are definitely amongst the most impressive species on our planet.

Horned frogs are a genus of frogs belonging to the Ceratophryidae family. They are also commonly referred to as the South American horned frog and also Pacman frogs as they do, in fact, resemble the shape of the character Pac-man from the distant video game.

One of the main characteristics about the species is that the female frog is unlikely to chirp or to croak as much as the male ones. They would only do so occasionally. The males most usually have spotted chests. At about a year in their lifecycle they begin to develop spots on their fingers and pads. Males are almost always going to have subtle pads on their front legs as well – this is typically taking part throughout their mating season.

As you can see, the diversity is absolutely significant and it should be taken into account. However, there are a lot of interesting things that you might be curious to find out, so let’s go right ahead and take a look.

Now, this is something rather general and it’s obvious that it’s going to vary from one species to another. Their habitat is also rather different and you should be well aware of it. Of course, one of the main things that a lot of people are well aware of is that frogs have muscular tongues. That’s not a myth – it’s an absolute reality. They tend to live at damp places and take a special place in the animal kingdom. With this in mind, it’s also important to understand that they use their tongue to swallow food.

We’ve covered most of the interesting characteristics in the previous section. The majority of the frogs have relatively short front legs and longer and more muscular rear ones. This is due to the fact that the latter are usually used for their characteristic form of transportation – they jump from one location to another. They are excellent jumpers and there is no doubt about it. Furthermore, they have very characteristic respiration and air circulation as well as circulation of their blood nonetheless.

The reproduction as well as the life cycle of the frog is particularly different based on the type and species. Some of them may live for long years while others don’t have this luck. Their diet is almost always mainly consisted of insects. This is the main reason for which they have a very special place in the animal kingdom – they bring a special balance in the ecosystem.

Now, this is another thing that is commonly discussed. The truth is that the relationship between humans and frogs is questionable, to say the least. Some people truly like these reptiles while others resent them. That’s just it – this is an important consideration and it needs to be taken into account.

In fact, a lot of the frogs are also collected for food. They are considered a very special and rather expensive dish in a lot of countries – that’s fun to know.

The Difference between Frogs and Toads

That’s one of the biggest questions that concerns quite a lot of people. What’s the difference between frogs and toads? The truth is that there is no easy answer to this one, mainly due to the fact that there are toads in the frog family. However, they aren’t really frogs, to put it this way. True frogs are the species that most people would consider as frogs and not toads. Toads are characteristic in a few ways – they are wider and they have shorter legs than frogs. In general, frogs have shorter and skinnier bodies in comparison – that’s the main differentiation criterion.

14 Fun Facts You Shouldn’t Miss Out on

And, we’ve arrived at the fun part. Let’s have a look at 14 amazing facts that you might be truly interested in finding out.

As you can see, frogs are truly fascinating creatures. They have so many different characteristics. This is what makes them some of the most interesting animals on the Planet. They are also subjected to a lot of experiments as they have certain qualities and functionalities which are particularly interesting and potentially groundbreaking. The wood frog’s ability to freeze over entirely and reanimate back up could be the key to immortality as we know it. This is something that scientists are working very hard on.