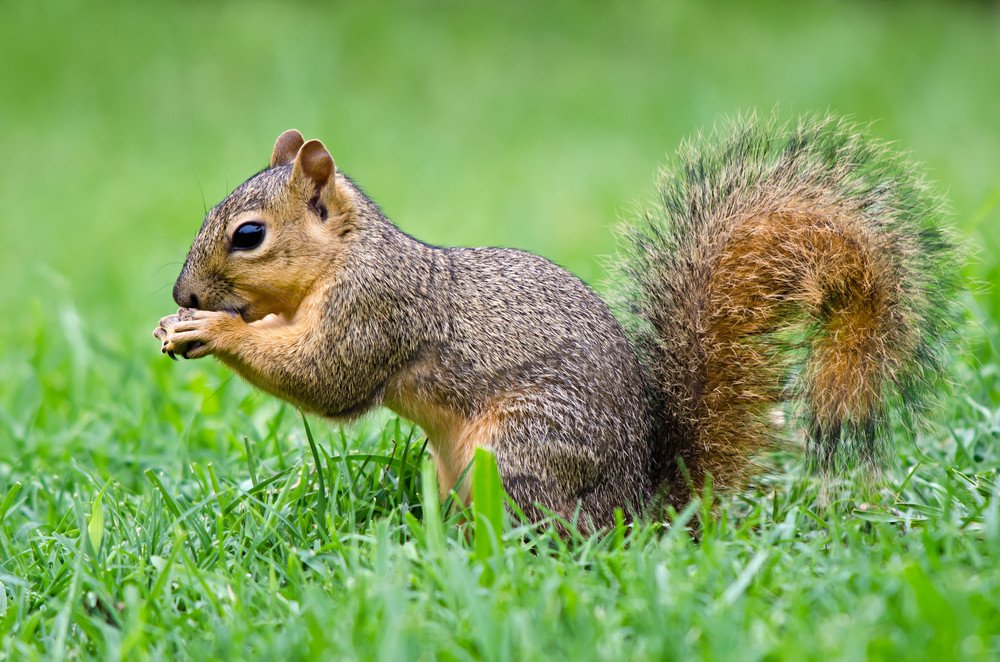 In our daily routine, we have seen many times a tiny creature named squirrels. Squirrels look adorable while jumping on the tree branches and running on the ground. All of us are familiar with their name and brief details as well. However, most people are unknown about one fact, the different type of squirrel species that exist all over the world. According to one research, there are almost two hundred squirrel species all around the globe. They vary in looks, size, habitats and other characteristics. The major three categories of squirrels are flying squirrels, tree squirrels and ground squirrels. These three classes are further divided into numerous sub-categories.

Few subspecies of fox squirrels are same as gray squirrels and American red squirrels because of their same appearance and body colors. However, few noticeable differences distinguish one species from the other. But for this, you need to have some knowledge about the squirrels. The dissimilarity lies in fox squirrels larger body size.  The body’s appearance color is more reddish than being black or gray. Gray squirrels are typically known as Fox squirrels’ close relative. Here we will discuss characteristics and other details of fox squirrel in details like their food, habitat, reproduction, and other attributes.

The appearance of squirrels may include different attributes like their color, size, a density of tail and body mass. The color of fox squirrels varies in different part of their body. The ‘niger’ part in their scientific name has the meaning of black, and this black refers to the black fur color of the upper body part of a first fox squirrel. On the other side, its common name that is fox squirrel refers to Fox color that is usually yellowish-red, and this yellowish-red color exists commonly in squirrel species. Their upper body part fur usually ranges from gray to black or tawny brown with sometimes having a brownish-gray appearance. Their lower body part has color ranges like white, creamy, yellowish, cinnamon or pale gray.

The head is black in color. However, few may have off-white nose and ears, and feet have light colors like white, orange or brown. Like upper body parts, their tails are also black or reddish-brown in color with a bit lighter shade at it is underneath part. During winter and summer season, this species does not change its color. The only difference comes in their ears and feet soles; these two body parts become denser during winters.

Male and female of fox squirrels has a similar appearance, and more common fox squirrels have black color. The fox squirrel is medium-sized squirrel species whose average length is 595.00 mm or 23.43 inches. However, in few cases, the length may vary from 17.87 inches to 27.48 inches. Among tree squirrel category, fox squirrels are the largest one. Fox squirrels possess furry tails and strong body and claws that can help them to climb and jump high on a tree as they are basically from tree squirrels category. Their body mass varies from a range of 24.53 to 43.45 ounce and on average they have a body mass of 28.19 ounces. The another important feature of fox squirrel is their attribute of gathering chemical on their teeth, tissues, and bones that make them look pink in color rather than white. This fox squirrel attribute is unique among all other mammals group.

2. Where do they live? (Fox squirrel region)

The fox squirrel exists mostly in the eastern and central part of United States. However, they also exist in a small number of southern Canada and northern Mexico parts. The outside regions include few cities of Western United States like Washington, and California and also in British Columbia. It also lives in some areas of Ontario, Canada. However, this species does not exist in New England, western New York, most of New Jersey, and eastern Pennsylvania.

3. What kind of habitat do they need? (Fox squirrel habitat)

The fox squirrels normally like to live in less dense, vast areas and Sanannah-like habitats that contain a limited number of trees spread at a distance. They do not like congested or dense environment with a lot of trees and plants. Because of this attribute, they are frequently found in different forests like pine forests, live oak, cypress and mixed forests. They are dissimilar to their close relative gray squirrels in this regard as gray squirrels prefer to live in dense forests. Their choice of living in open area makes them suitable to live in areas having urban and suburban settings. Furthermore, they also need trees with greater heights and having compatible holes or openings. The openings on the trees help them build their nests. These holes can also serve the purpose of becoming hibernating place during winters.

4. How do they reproduce? (Fox squirrel reproduction)

Fox squirrels usually experience two main breeding seasons during a year. One is a period between November and February, and the other one usually occurs from April to July. During their breeding season, each female is chased by different male fox squirrels and the one who will win among other males, mate with the female fox squirrel. The gestation period of fox squirrels are usually from 44 to 45 days, and after this period, they give birth to two to six baby squirrels. The average number of offsprings is three; however, it may vary depending on a type of food they get. The baby squirrels are helpless at the time of their birth as they have their ears and eyes closed and the body without any fur. The baby squirrels remain dependent on their mother. After a period of a week or so, their fur starts to appear. However, they remain blind until they reach the age of five weeks. They start leaving their nests at the age of seven to eight weeks, even at this age they are not able to roam freely. They start leaving nests on their own at the age of twelve weeks. Baby fox squirrels share their den with their mothers during their first winters. Male fox squirrels become able to reproduce at the age of ten to eleven months. However, female fox squirrel can not reproduce until they reach the age of one year.

5. How long do they live? (Fox squirrel mortality)

The average life of fox squirrel depends on whether they are wild or they are under confinement. For fox squirrels in captivity have life span range of 8 to 18 years. Eighteen is the maximum period in which a squirrel can live. Whereas, on the other hand mostly wild fox squirrels expire before they even reach their adulthood.  Usually, for the female fox squirrel their anticipated life is 12.6 years, and for males, it is 8.6 years.

6. How do they behave? (Fox squirrel behavior)

Unlike all other tree squirrels, fox squirrels like to spend their time on grounds rather than on tree. Still, they are reasonably good and fast climber. They are highly punctual, and anti-colonial squirrel species. Fox squirrels can be seen sharing their food with their fellow squirrels. However, they are described as an anti-social creature who prefer to live alone all their life. The only time in which they can be seen together is breeding season. They can make a variety of sounds, unlike other birds. So it can be said they possess a large vocabulary than others. In the case of feeling any danger, they make other fellows alert by screaming and by standing straight while moving their tails continuously. Fox squirrels are astonishing jumpers and cover an area of 15 feet quickly in a single jump.

7. How do they communicate with each other? (Fox squirrel communication)

Fox squirrel has different senses to communicate and sense the environment. They have a perfect sense of vision, touch, hearing and smell through their various receptors. Apart from the sense they contain vibrissae in various parts of their body. These vibrissae are thick hairs that are present in the nose, chin, eye, and forearm areas and help to detect things by touching them. Furthermore, they can also communicate with other squirrels through making a variety of sounds like chattering, scream, and whimpers. Another way of their communication is the different tail movements.

8. What do they eat? (Fox squirrel food)

Fox squirrels can eat an immense variety of foods. However, the majority of them prefer to eat nuts and tree seeds like hickory, beech, pine, oak and walnut. Nonetheless, they can also take their food through many other fruit seeds flowers, fungi, twigs and even few crops like soybeans, corn, and wheat. Sometimes these species also steal birds’ eggs and baby birds for eating.

9. What eats them and how do they avoid being eaten?

The first enemies who can prey and eat them are owls, snakes, and hawks. Owls and hawks mostly eat baby squirrels. Sometimes, adult squirrels become prey to snakes. Fox squirrels have the natural ability of agile climbing and on many occasions helps them to escape from these enemies.

10. What roles do they have in the ecosystem?

Fox squirrel may seem non-valuable to mostly people. However, one should not forget the fact that nothing is useless in this world. Fox squirrel also plays a significant role in ecosystem maintenance because of their habit of eating seeds. They eat tree seeds and also save them underground for the hibernation days. They usually store abundant of seeds that are usually not retrieved by them. These seeds then result into fully grown trees after few years.

11. Do they cause problems?

Fox squirrels are normally considered harmless to many people. However, they sometimes become a serious issue for crops when they start eating crops like wheat, corn, and soybeans. Furthermore, they sometimes also damage telephone or other electric wires by chewing them.

The most important duty fox squirrel performs for us is scattering seeds of trees and other plants. At some places, they are hunted for fur, but in the presence of other dense fur holding animals, their fur is not considered useful.

Nowadays, because of overhunting of squirrels and destruction of many large forests, there is a danger to many squirrel subspecies. Extreme weather conditions are also the main reason behind declining of fox squirrels. The Fox squirrel species should be protected by taking preventive measurements.

Fox squirrel as crop pest and how to get rid of them?

Among all tree squirrel species, the most dangerous and harmful species as a crop pest is fox squirrel species. It is harmful even for your gardens and homes. In some areas, fox squirrels reside in the agricultural area and become a constant trouble for crops. If they are residing in the home, they will feed on different nuts, fruits, and vegetables present at home. The crops and fruit trees can be protected from Fox squirrels through making covers on the crops rows. These covers should be made up of sharp wiring to stop fox squirrels entering in the crops area. Dogs can also help in chasing and preventing them from going into the agricultural land.

【Read more about Get Rid of Squirrels】