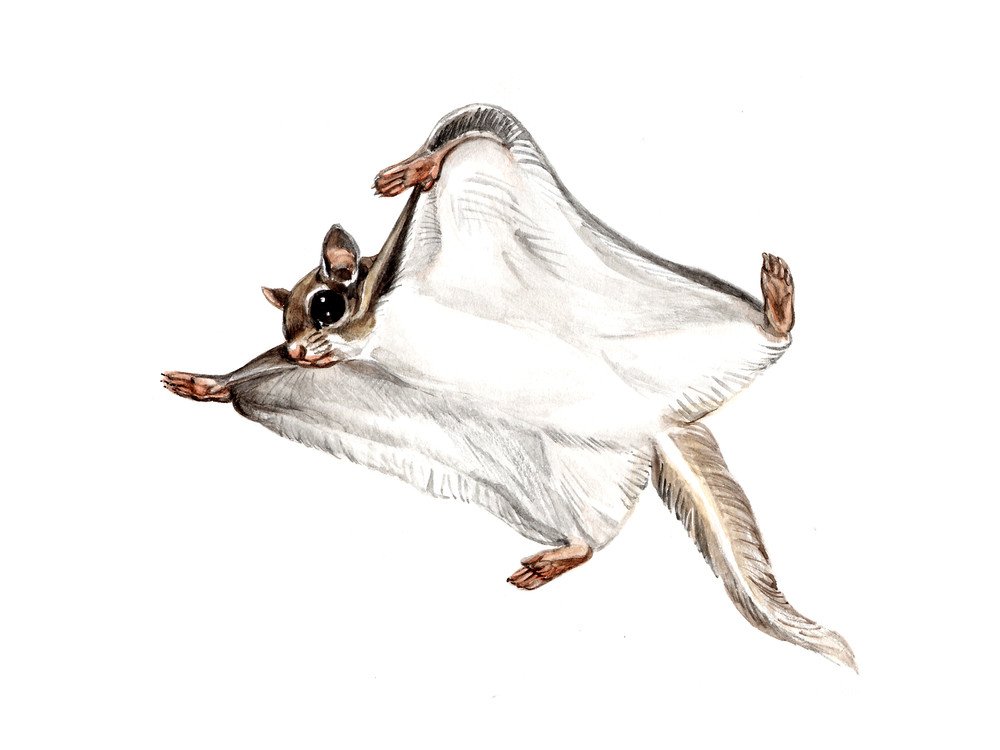 There are 44 species of the squirrels exist in this world. Flying squirrel are one of the astounding types of squirrels, also recognized as Petauristini or Pteromyini. These squirrels are capable of flying. However, they do not fly like other birds or as bats do. Nevertheless, they have an ability of gliding on trees.

They glide with the assistance of furry, comprises of a parachute-like membrane, which is known as patagium. It helps in stretching these squirrels from wrist to the ankle. This gliding procedure is similar to bats. In addition to that, these squirrels embrace a long tail which keeps them stable during the flying.

In appearance, they look like normal squirrels however actually, they are quite different if you observe them well. They comprise of numerous adaptions that can suit their living style and do not live under same conditions like other squirrels. They have longer limbs than other birds, but remaining bones are shorter including hand and foot. They can control their glide path using the limbs as well as the tail while flying.

According to the studies, the flying squirrels were discovered more than 17 million years from now, and they are monophyletic. Most of them are omnivorous and nocturnal which means they eat fruits, flowers, seeds, insects, spiders, and bugs, etc.

The moment young squirrels born, at first, they are helpless and unable to take care of themselves. The mother squirrels look after them and feed them for about 6-8 weeks as well as teach the gliding skills. After two months they can fly their first flight.

There are more than 40 species of the flying squirrels found all around the world. From these species, there are two special types, North American and South American flying squirrel. They are found in the forests of north and southern part of Canada as well as in America.

The southern flying squirrel is 9-10 inches long and often weighed 2-2.5 ounces. Mostly, they breed in spring and deliver their babies in May or June. They reside throughout the North America, comprising the area of southern Canada as well as southern parts of Florida. Furthermore, they exist in areas around Minnesota and eastern Texas.

The northern flying squirrel is slightly long in size from 10-11 inches weighing 3-4 ounces. They mostly breed in late winters delivering their babies in April or May. These squirrels are the inhabitant of warmer places, so they are found in the northern Canada, Tennessee as well as southern parts of Alaska. They also live along the Pacific Cost.

Furthermore, both of these have dense and soft furry skin which embraces double shade. It looks grayish brown from outwards and creamy white from inside. Both of these typically give birth to 2-7 babies. Their eyes are larger than their body size.

The astounding feature about these is that they have loose furry skin, extending from forearms to the hind legs which help in flight. When they stretch their legs, they bear a resemblance to bats, and their wings allow them to glide from one tree to another tree.

The flying squirrels embrace grayish skin on their backs and cream white on their front part of the body under-belly. Their eyes are black in color, large and are perfect for the night vision.

These flying squirrels are often misperceived as a kind of birds. When people first heard about these, they think these squirrels can fly like birds. However, the flying squirrels don’t have the ability to fly normally, but these creatures glide rather than flying.

They comprise a special membrane between their legs and forearms which help these mammals to glide until they land. This way of traveling from tree to tree is very beneficial for them. Since they don’t travel on the ground, therefore, there are very few chances for a predator to prey these creatures.

Flying squirrels are the omnivores that mean they comprise characteristics of both herbivores and carnivores. Their food includes seeds, flowers, fruits, nuts as well as tree saps. The flying squirrels from the south are mostly carnivores, and they eat mostly eggs, insects, birds, and carrion.

They have a unique eating habit. While eating tree nuts, some of them open the shell to draw out the fruit from inside. On the contrary, the other flying squirrels break the nut into smaller pieces and then separate the meat from the shell.

Flying squirrels are smart as well as a great escaping artist due to their unique ability of gliding. When they land on one tree, they quickly move to the other side of the trunk to avoid any predator that may have followed them. However, they do not get success every time in dodging the predators. Animals like owls, snakes, hawks as well as other climbing mammals can capture these tiny mammals frequently.

These little creatures live in coniferous forests. They build their homes in the woodpecker holes, snags and sometimes in abandoned nests of other birds. Furthermore, these squirrels can live both individually and in groups. Especially in winters, numerous squirrels nest together to keep the nest warm and prevent themselves from the cold.

Flying squirrels have an average lifespan of more than ten years when they are kept captive. However, their lives are reduced to half if they live in forests. They tend to give birth to new species once a year during the early spring and late winters.

The southern flying squirrels give birth twice a year. They can produce 2-7 babies at a time. When the baby squirrels are born, they are totally dependent on their mothers to be taken care.

The ability of the flying squirrels to glide has captivated the humans greatly. The skydivers and base jumpers even had custom made costumes that look like flying squirrels. With the help of this suit, they can slow down their descent and even move through the air, landing at their desired place.

Try these interesting facts about the flying squirrels on for size:

Flying squirrels are very common rodents that exist in various parts of US. They usually come out in the dark in search of their food. That is why very few people are familiar with them. Due to their nocturnal behavior, people rarely get a chance to see these creatures, and that is why they do not become a victim of hunting activities. Nevertheless, two of the species of the northern flying squirrel are listed endangered because they couldn’t find the appropriate habitat. But in general, these creatures remain safe.

As discussed above, flying squirrels don’t fly they glide from tree to tree. It is possible for them to do so because of their special membrane that serves as a parachute for landing properly. When the squirrels stretch their arms and limbs, this membrane takes the shape of wings that provide them the ability to glide easily. They can even control their direction and are capable of turning 180 degrees during flight.

The flying squirrel may not fly like other birds, but their gliding abilities are phenomenal. The average gliding distance of northern flying squirrel is about 65 feet which are 20 meters approx.

Nonetheless, not just that, if needed they can even glide a longer distance. A study showed that the longest distance covered by these was 300 feet which are approximately like covering the soccer field.

Keep as a pet

The large shiny and bulging eyes of the flying squirrels are very attractive. Numerous people find them cute and pretty enough to keep them as their pets. In several regions, they are not allowed to be kept as a pet unless you have a license to keep them.

If you are thinking of buying yourself a pet, it is preferred to buy a baby squirrel that is only 4-6 weeks old. Buying a baby will benefit you because it will get acquainted with you earlier as compared to a grown one.

Carrying the baby squirrel in your bag or pouch will aid them to create a bond with you more easily. Furthermore, feed them goat milk before giving them a proper diet as it is good for their health.

Keeping the baby squirrels nearby for 2-3 hours every day will assist them to sleep for a long time. Once they get to you, they are very fun and lovely pets. They will play with you and even start jumping on you once they are comfortable in your presence.

Flying squirrels are very social and friendly animals. Once they get familiar with their owners, they become very charming and delightful pocket pets. They can also live in squirrel cages in case if you can’t carry them everywhere. When you keep them as your pet, make sure you buy their food from the market that is specifically for them. Keep cleaning their cage from time to time to prevent them from any disease.

Before buying the flying squirrel, you need to check that if the baby is healthy or not. If you buy an unhealthy baby, then it won’t survive, and your money will go to waste. Moreover, check that their body is covered with fur and there are no fleas or ticks on the body.

Ensure that they don’t seem to be very thin or has a running nose. While buying the flying squirrels, mostly they don’t come out of their cages. You shouldn’t be concerned about that as in starting they are usually very shy and don’t bond easily with everyone.

If you are keeping the animal in a cage, then make certain that the cage is not small. Since these animals are blessed with the gliding abilities, so you should provide them with enough vertical space so that they can move and climb. It would be great if you put some woods and branches in the cage. It will give them a more homey feeling, and they can play around climbing and chewing the branches.

Certain people who keep them as a pet also make homemade cages for them in which they can make their nests using some paper towels. In addition to that, don’t forget to keep the water bowl in their cage so that whenever they feel like thirsty, they can drink from there.