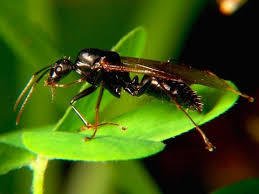 In as much as winged flies are rare, it is incorrect to dismiss them as a species which result from genetic mutation. Their existence has a reason behind it, and they are virtually ants that are sexually mature. They are part of the colony that ants create and serve the purpose of reproduction. The reproductives are part of the flying ants, alongside others like carpenter ants, they go through all their immature developments while confined into colonies and when they attain full maturity, they develop wings. Later on, both male and female fly out of the colonies to mate and reproduce for the whole colony.

One interesting fact about the winged flies is that there are many different types and the swammers are known to be the poorest in flying. They are always at the mercy of the winds, but lucky for them, the wind stirs them, and they end up landing near their colonies. Another fact is that not all flying ants can be classified as ants. Termites, wood-eating to be specific, also have wings. The reproductive species of the termites have wings that help in mating. To the untrained eyes, it is easy to dismiss them as flying carpenter eyes, given that they look alike in many ways. Another notable fact is that only the female ants survive the reproductive flight. The male dies after mating, leaving the female ant, which now becomes the queen of the colony. She then finds a place where she sets up a nest. The location of the new nest normally varies depending on the kind of ants setting up. The carpenter ants normally prefer a piece of timber to set up on while garden ants find a favorable place in the ground. The wings of the flying ants never last long. Once they land, the females bite the wings off before beginning work on the nest.

What Causes Flying Ants in House

Most people find it hard to understand how flying ants operate. This raises one question: what brings flying ants to your house surroundings? Summer times provide the best settings to harbor flying ants. They fly out to mate and reproduce around this time since this period provides a conducive environment as the weather usually is warm. Most of the in-house contributors include sugary items. These bits of food and granules of sugar left on counter tops and areas where they are exposed attract flying insects. Sticky surfaces are mostly caused by sugary foods and drinks that have been spilled that result in the whole place crawling with ants.

Another reason is free entrance. Leaving the doors and windows open when it is a season for flying ants are around is not the best idea since they will fly into the house and might even pitch up a nest. They build their nests indiscriminately. You will find them even in a building. A good example can be wasps – a dangerous species if it builds its nest in a residential building because of its unusually painful sting. The flying ants also get into the house where there are cracks and holes in the building. Winged termites also take advantage of holes and cracks, especially if the house is wooden. A compound full of trees also serves as one of the key spots that attract a lot of flying insect. A structure that has been built next to a tree is more prone to end up with flying insects as opposed to one that is at a distance.

Don’t worry too much – just follow these steps to kill flying ants if you found them a lot in your home.

The Difference between Flying Ants and Termites

There are a lot of ways one can tell the difference between flying ants vs termites. Both of these species are very small, so it is hard to tell them apart. However, they do have very notable differences, starting with their bodies. A flying ant meets all the criteria of most insects. It has three major body parts: the head, the thorax, and the abdomen. Ants, even the flying ones, have a very distinct thin and patched in waist. This feature is what separates their body parts so distinctly. Termites, in contrast, have only two body parts – mainly the abdomen and the head.

The winged termites are easier to tell apart from other insects given that they have a very extensive and long waist. This makes it tough to differentiate between the thorax and the abdomen; one cannot tell if the difference even exists. Also, termites have wings that appear to have the same length. They are normally four in number, a pair on each side. This feature is significantly different from the flying insects, where front wings are longer than the ones at the back. They are distinctly larger since they fly a longer distance compared to the termites.

Another notable difference between the two can be seen in their antennae. Winged termites have straight antennae while flying ants have somewhat elbowed-looking antennae that are naturally bent. Other differences are that most winged termites are found in secluded places while flying ants reside in the open. Most winged termites are always found in a regular household room or kitchen. That is why they are considered more of pests compared to ants. Flying ants are often found roaming the gardens and open areas.

There is always paranoia surrounding ants. They are dangerous enough on the ground, so flying ones are twice as scary. There is always the burning question.  Just like other insects, the flying ants bite as well. However, the bites vary depending on the species. It is a belief that most flying ants do not bite unless provoked and disturbed by human beings or animals. Depending on the type of species, people react differently with the varying type of insect the bite came from. Some people develop serious allergic reactions while others show no symptoms at all.

Most flying ants tend to overwhelm, swamp, or inundate the place they are focused on nesting. Some of the areas they choose to nest include the ceilings of buildings in residential areas. This mostly applies to places where carpenter ants choose. Most of these ants do not sting, but carpenter ants do. When they feel invaded, they use stinging as a defense mechanism to chase the competition or presumed predators out of their nesting zone. More than often, the carpenter ants give a bite that is painful since they use their pincers. Their pincers look like the claws that lobsters or crabs have, only that they are small in size but equally painful. Apart from biting, they are also known for spraying formic acid that causes an allergic reaction or quite a sting. Some of these flying ants do not shed their wings fast enough to protect their nests. Those particular species are more prone to bite than the other types.