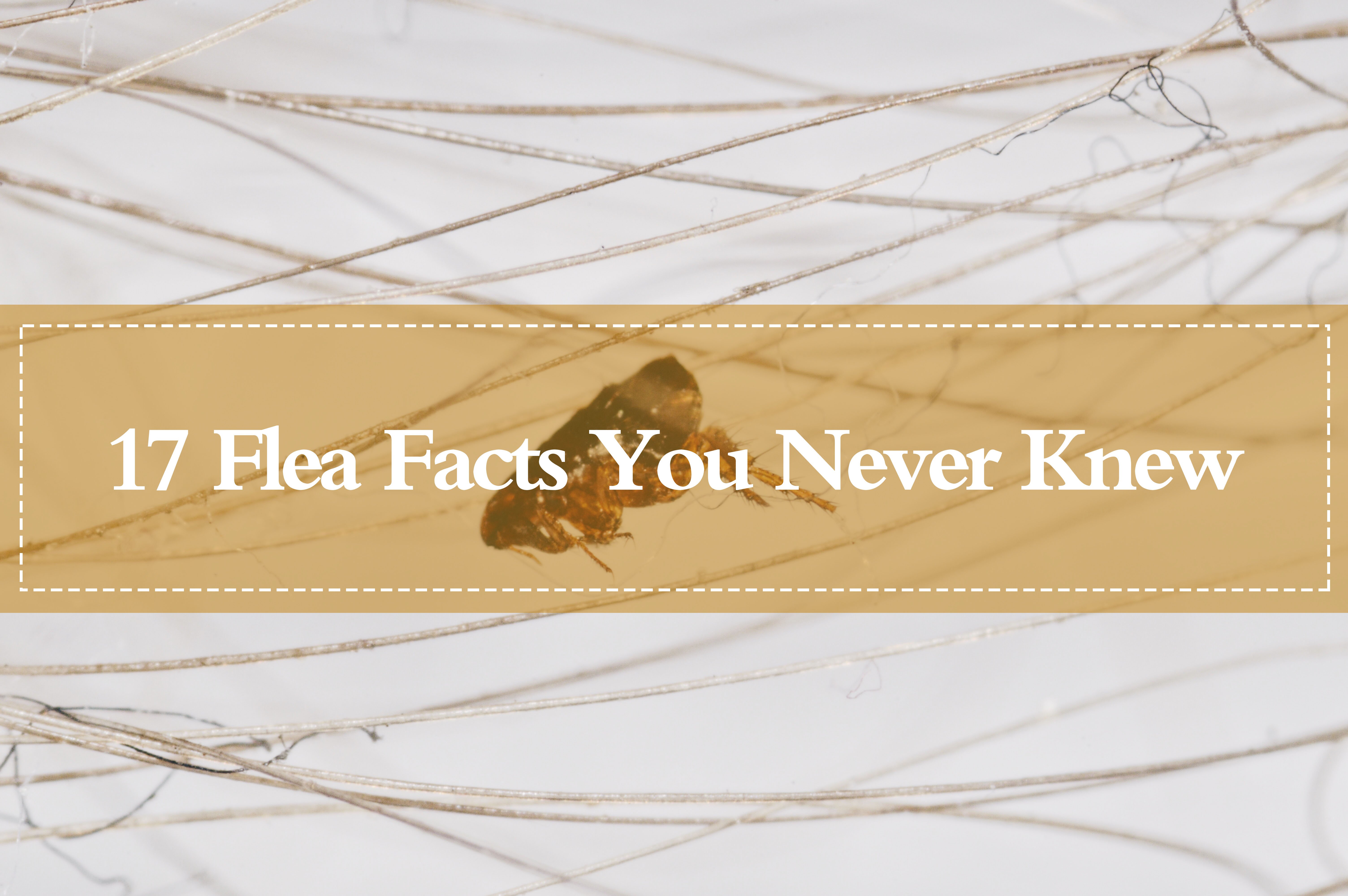 If you have pets, you’ve probably gone toe-to-toe with an army of fleas at least once. In a matter of days, these pests can take over your home, taking no prisoners and making you their full-time buffet. But most people don’t realize that fleas can invade your home even if you don’t have any furry friends living with you. Tracking in just one or two from the outdoors can lead to an infestation quicker than you ever imagined.

Armed with enough knowledge about your tiny foes, you can kick that flea infestation out of your home swiftly and without mercy. Continue reading to get the facts on fleas.

Yes. Fleas are a part of the Siphonaptera order, and they’re considered external parasites. What many people don’t realize is that there are actually several species of fleas in the world – more than 2,000.

But some of the most common species include:

Like tiny vampires, fleas use their proboscis (a type of tubular mouthpart that’s used for sucking and feeding) to pierce the skin and suck blood from their host.

Yes. In fact, that’s what fleas are known for – their ability to jump great heights despite their small size.

Like other insects, fleas have six legs that get increasingly longer as they move toward the back of the body. Their hind legs are especially long and adapted for jumping. They’re also equipped with sharp claws to grasp their host.

Not surprisingly, fleas are one of the best jumpers of all animals – second only to the froghopper.

Yes, but they do not have the same compound eyes that other insects have. Instead, they use one biconvex lens to process visual information.

Yes. Fleas are black or dark brown in color. Some are reddish-brown, like the cat flea. Their dark color makes them easily identifiable in most homes and in some cases, in an animal’s coat.

The oriental rat flea is a bit lighter in color, with its hue being closer to beige. 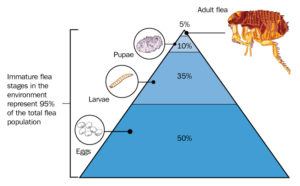 Fleas go through four lifecycles: egg, larva, pupa and adult (imago). In order for these pests to be able to reproduce, they must first feed on blood.

After feeding, female fleas lay eggs in batches of about 20. The eggs are typically laid on the host, which makes it easy for them to spread to different locations. It takes anywhere between two days to two weeks for eggs to hatch.

The next stage is the larvae stage, during which the fleas hatch from eggs. Immediately after hatching, larvae feed on any organic matter they can find – feces, dead insects, vegetable matter. At this stage, the fleas are blind and prefer to stay in dark places.

If the food supply is consistent, the larvae will pupate and weave tiny silk cocoons after undergoing three larval stages over one to two weeks. They’ll stay in these cocoons for another week or two before emerging as a fully-developed adult flea. Pupae may stay rested until they receive a signal that a host is near. Signals can be anything from sound vibrations to carbon dioxide and heat.

Once adults emerge, their only goals are to find blood and reproduce. Under ideal conditions, adult fleas can live up to a year and a half, but most will only live two or three months.

Female fleas can lay up to 5,000 eggs over their lifetime, which means populations can easily get out of control.

As you can imagine, a flea egg is incredibly small – most less than 0.5mm in size. Most are either white or transparent. They may look like tiny grains of salt or dandruff flakes.

Some are, some aren’t. The water flea, for example, is asexual. But other species of fleas do require a male to reproduce.

Females do need to feed on blood to reproduce after mating with a male because the blood causes her eggs to mature.

No, fleas are wingless insects. They rely on their legs to jump great distances and find hosts to feed on.

Yes, fleas are considered external parasites because they feed on their hosts. And fleas aren’t too picky about where they get their meals from. They will feed on a wide range of different warm-blooded vertebrates, including humans, dogs, cats, rabbits, rats, squirrels, chickens and mice.

Although fleas aren’t considered especially dangerous in the modern world, they once were. Fleas can carry bacteria, and transmit that bacteria to their hosts.

Aside from bacteria, they can also transmit the myxomatosis virus, protozoans and a certain type of tapeworm known as Hymenolepiasis.

If you’ve dealt with a flea infestation before, you know that these insects prefer warmer environments. They typically become an issue in the summer when temperatures are warm and humidity levels rise.

The ideal temperature for fleas to thrive is between 70 and 85 degrees, but they can certainly live in warmer or cooler temperatures.

Aside from warmer temperatures, fleas also prefer higher humidity – around 70% to be exact. The moisture in the air allows flea eggs to hatch.

As for their outdoor environment, fleas prefer dark spaces and tend to be more common in sandy areas. They’re commonly found in overgrown bushes and grass, which provide a warm, dark and humid environment for them to thrive.

Adult fleas eat blood – and nothing more. In the larvae stage, fleas will eat any organic material they can get their mouths on, but once they progress into the adult stage, they will feed on blood and blood alone.

13. How Long Do Fleas Live Without a Host?

Fleas, like other parasites, need a host to live. And in this case, they need blood to survive. Earlier we discussed how fleas can live up to a year-and-a-half under ideal conditions – i.e. warm temperatures, a continuous supply of food, etc.

But what happens if the flea can’t find a host? How long can it survive without food?

Without a host, fleas will typically only survive a few days. Newly emerged adult fleas can live as long as a week without blood. But fully-developed adults may live several months without a blood meal – so long as they remain in their puparia.

Flea bites itch not because of the bite itself, but because of the saliva from the flea. The saliva contains a minor anesthetic or numbing agent that allows the flea to latch on without being detected. That anesthetic is usually responsible for the itching.

Itching can also be caused by other things in the flea’s saliva, like bacteria and diseases, which can irritate the skin. 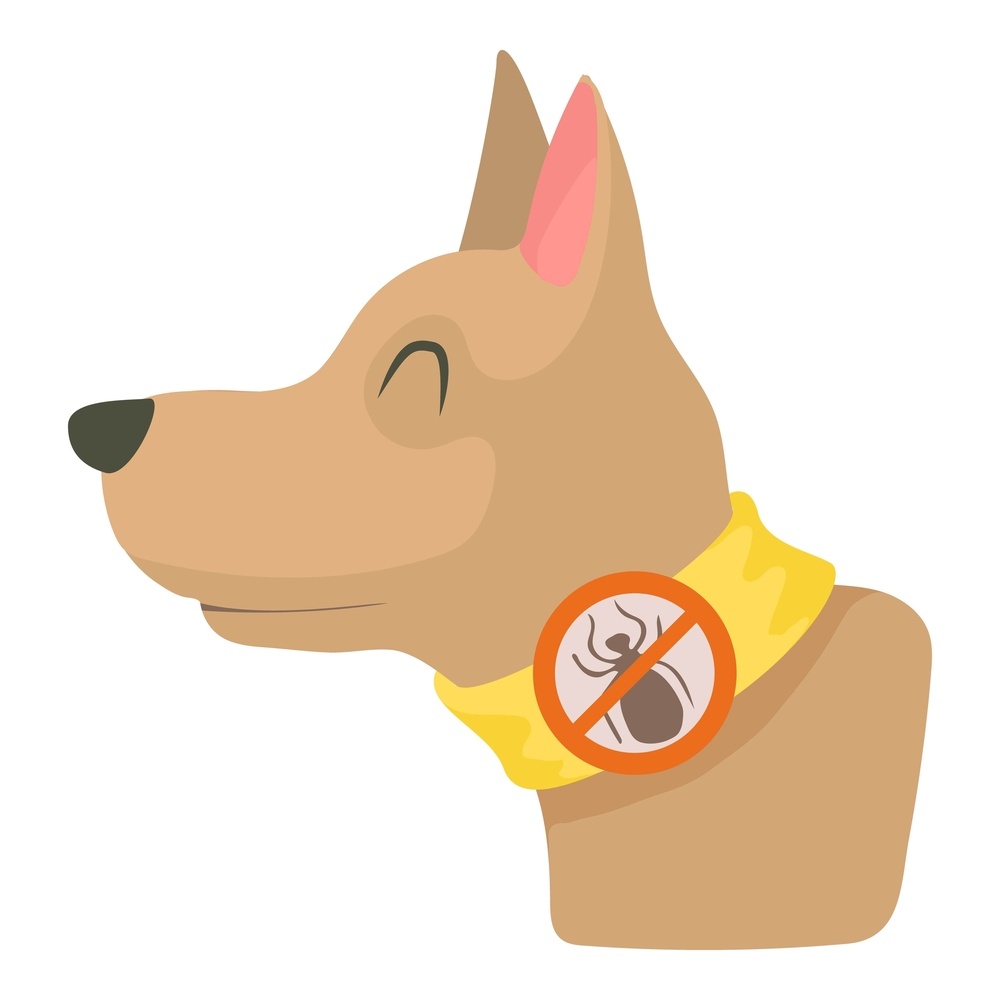 If you have pets, you may be considering buying a flea collar to keep these pests away without having to apply poisons (i.e. flea control products) on your animals. But are they safe to use?

The answer is: yes.

Flea collars are one of the oldest and most basic ways to prevent fleas. They work by emitting a flea-repelling drug into the hair follicles and sebaceous glands on your pet’s neck. As a result, the fleas move down to the end of the pet’s tail, fall off, and die.

Most collars work for about 90 days before needing to be replaced.

While generally safe to use, flea collars can cause some side effects. Some pets may experience redness, scratching and hair loss if they have sensitive skin. Usually these signs appear within 12-48 hours of application.

A flea flicker actually has nothing to do with fleas, but rather is a term used to describe a play in American football.

A flea circus is a sideshow attraction where fleas are attached to miniature items and encourage to perform a show.

The first-ever recorded flea circus was in the 1820s when Louis Bertolotto, an Italian impresario, advertised his show in London. Flea circuses were around until as late as the 1960s.

Today, most “flea circuses” merely use mechanical or electrical effects rather than real fleas.