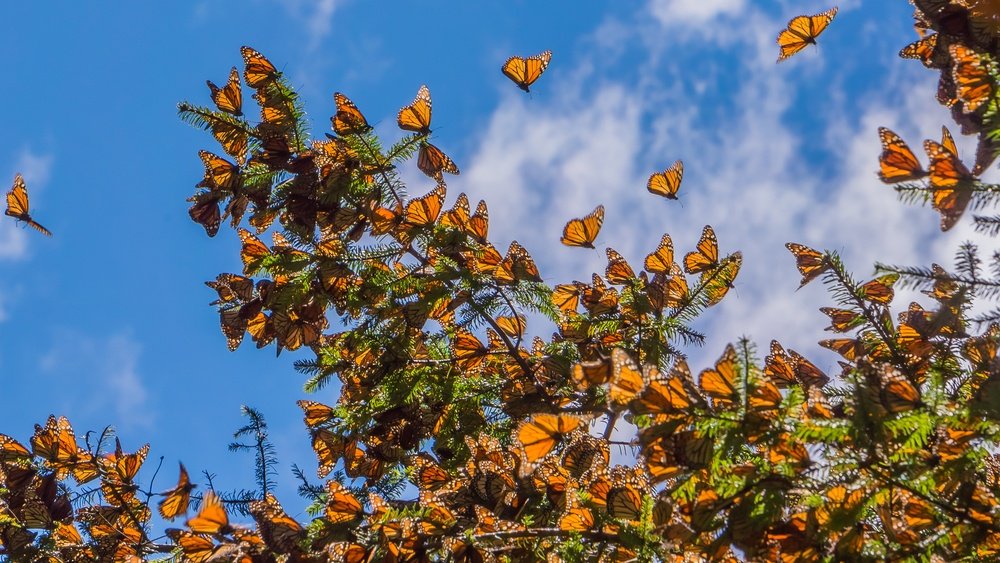 With its distinct white, orange, black wings, Monarch butterflies may be the most widely recognized of all the butterflies that you may have come across. While beautiful, the distinct-colored wings actually act as a defensive mechanism against the predators claiming that they are poisonous and foul tasting. They are considered the king of butterflies hence the name Monarch. There are so many amazing facts and myths about this type of species which would leave you stumbled. Let us learn some interesting facts about this butterfly species and why it is considered so unique as compared to the rest. Monarch butterflies may be the most recognized North American butterfly species that have distinct wings and is considered as an iconic pollinator species as well. They are found throughout the United States including Canada and Mexico. What’s the most astonishing characteristic of monarchs is the 3000-mile journey they make in the autumn to their wintering grounds in Southern California or to the Sierra Nevada Mountains of Mexico. However, it will depend on which part of Canada or the United States they migrate. Monarch butterfly embarks on epic migration but unlike wildebeest or birds, these butterflies migrate to never return. Migration is a natural genomic in the world of insects and other animal species. Monarch butterflies are considered to be the excellent migrants for the fact that they know the right way even if they had never done this type of journey ever before. There is an internal compass within every monarch, which we in human terms call instinct. It is so strong during the fall and spring that they never fail to find their way. During the winter season, they go into hibernation in their home grounds in southern California or in the Nevada Mountains of Mexico before the migration. Monarch butterflies can be distinguished from other butterflies on the basis of their color. If you come across the black and orange blend of Monarchs, they are the most easily recognized species of butterfly. They are spread throughout the Americas and can migrate to as far north as Canada and as south as Mexico during the winters. It is said that a single monarch butterfly travels thousands of miles during its entire lifespan.

Moving further about their appearance, such lovely butterflies have the body in black color along with head and antennae. The wings come with the blend of orange and black while the outer part of the wing is all covered with the thick black border or you can say veins. Furthermore, within the black border there are white spots that you can notice. The white spots may vary in size and range and gives the monarchs the most decorative wings as compared to other butterflies. In addition, on the upper side of the wings, there are orange spots.

You can see the monarch butterflies’ underside wings when they are feeding or resting on a flower. At that time, you would notice that instead of bright orange color, their underside looks drabber, and the color of the orange-brown mixture becomes more visible. Both males and females can be easily distinguished by looking at the top of their wings.

Generally, Male butterflies sport a black spot at the center of their hind wings whereas the females don’t have any particular spot on their wings. The black spot that every male monarch butterfly has is actually a scent gland that they use to attract females butterflies. Another way using which you can tell apart a male and female monarch butterfly is that the female monarchs have thick veins as compared to the male monarchs. Their wings are also not much bigger but can spread up to 4.8 inches wide.

On the other hand, for identifying the monarch butterfly caterpillar, simply look for the color of bands they possess. That is, the monarch caterpillars come in yellow, white and black bands which make it easier to identify them.

*  Diet on Which Monarch Butterfly Survive When Monarch Butterflies are in their larval stage, they usually feed on the milkweed plants. However, like all butterflies, they change their diet as they grow. That is, they start feeding nectar from different flowers including milkweeds as they grow into adults. Such type of species will return to the areas where the milkweed grows the most. So if your home has the milkweed growing then expect these little ones to be the guest in your garden. They also lay their eggs on this plant. In short, their entire survival depends on the milkweed.

The interesting part is even after they migrate from one place to another, they always end up settling to their very own place where they initially survived on milkweed. So if they fly away, don’t just assume that they will not return. It might be their migration phase, and once they complete it, they will return to their initial place itself.

Talking further about their diet plan, although they feed on Milkweed, the plant contains glycoside toxins that can be harmful to their predators but not them. The caterpillar generally feeds on different parts of the milkweed plant that allows them to store most of the toxins in their body. And even after metamorphosis, the toxins remain their body making the fully grown monarchs poisonous as well.

The toxin would then get accumulated in the system even when they turn into a complete adult. This is their biggest defense mechanism against predators like birds and other small reptiles. Such type of butterfly species can feed on other flowers as well but their keen interest always remains the milkweed. Millions of monarch butterflies usually trip to Canada and Mexico during the winter seasons. During their migration phase, you will find thousands of butterflies landing on a single tree.

It is still a mystery how these butterflies take a specific direction when it comes to migrating to another place. Some suggest that it one of the butterflies’ attributes while others say that it is more like a programming that the Mother Nature has gifted them with. The monarch butterflies tend to fly at the speed of 12 to 25 miles per hour, making them one of the fastest. Their speed is the reason why they are able to travel thousands of miles within a short span.

During the migration phase, they store their energy in their wings and this process is known as thermal.

As compared to other regular yet typical butterflies, there is something different about Monarch butterflies. You will find the range of monarch butterflies widely spread across different corners of the United States of America. Be it in North America, Pacific coats and even in the Atlantic, there is no such place where you will not find this butterfly species.  Also, you can find them in the Rocky Mountains and in Central America as well.

The habitat used by monarch butterflies is totally different from other butterfly species. If you compare two different climates that are; summer and the winter, you will find them all around during summer or spring seasons as it is the ideal condition for them to mate and form colonies.  For them, they can’t tolerate cold temperature and that is why when they sense the arrival of such climate they tend to migrate to the place where they can keep themselves warm all the time. When we talk about the behavior pattern of monarch butterflies they possess the ability to produce four generations during summers. In the first three generations, they have the lifespan of 4-6 weeks which is focused more on the survival and reproduction and during that time, they continue their migration towards the north. They will contribute to head northwards while expanding their population. On the other hand, the next generation will also continue the northward migration in search of the compatible climate and plenty of food. As compared to the previous three generations, the fourth generation is completely different as the monarch butterflies can live up to nine or more months. Considering their behavioral pattern, they tend to focus more on expanding their population as much as they can as not only predators but environmental conditions like rain and snow are such factors that contribute to their death rate at a faster pace.

The most interesting part about the monarch butterfly facts is their migration and their lifespan. Monarch butterflies tend to live longer as compared to other butterfly species. They can live throughout a year or more and the best part is that their population is kept under controlled. Mother Nature plays a crucial role in keeping their population in check and even the swarm of monarch butterflies don’t do harm to the environment. In fact, they are known as the pollinator species that aids to pollination. It is still a mystery how the four-generations manage to survive altogether but yes, the fact is that all of the four generations are constituted by 4 different butterflies which together finish the unique phase that too in just one year. Again they restart their process of living up again from the primary stage which is the first generation. The hatching period of Monarch butterfly eggs is nearly 4 -5 days. They emerge as tiny caterpillars that grow with the time. During the first two weeks of the caterpillars’ initial growing phase, their size remains the same and they survive on the milkweed where the Mother butterfly had laid the eggs. Once they start to grow, each caterpillar then turns itself into a chrysalis and then gets into the metamorphosis phase.

It is after the two weeks that the actual growing starts. When they are into the developmental stage where monarch butterfly caterpillar would be transforming itself into a butterfly, you will find the color spots created. After the period of around 2 weeks, the caterpillar will emerge in the form of a butterfly.

Once the caterpillar evolves, the lifecycle continues. The fully grown butterfly will then get back to the North to create further generations and migrate with their mate just the way their parents did.

Strange but Interesting Facts to Amaze You Monarch butterflies communicate with each other using their color and scent. They taste the food through their feet and if they want to share it with their partner, they send signals using their scents to tell the other butterflies that they have located or found food. The butterflies will follow the scent to reach their destination.

In case they experience any threat, they immediately send signals to other butterflies using their bright orange wings. However, they show their bright colored as the warning sign.

On the other hand, if the body temperature of the monarch butterflies is less than 86° F, then they will not be able to fly. Rather they prefer warming up themselves by sitting under the sun.

A swarm of Monarch butterflies starts migrating from the month of August until October with an aim to reach south. This journey towards the south makes them cover around 2500 miles during which not all reaches the destination. A fully grown adult monarch can fly up to 100 miles in a single day.

After the winter season gets over, strangely, monarchs return to the winter grounds which they had left earlier.