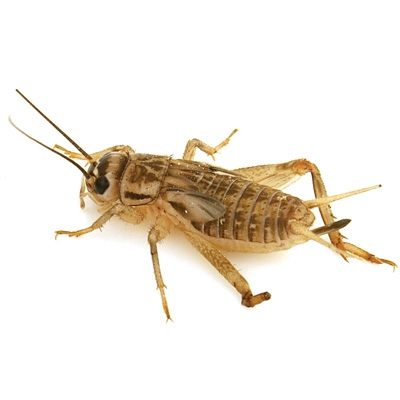 Crickets or ‘true crickets’ are the most common type of insects sharing this planet with us since ages. These soft-bodied creatures belong to the insects’ family named Gryllidae. Though a small insect, but there are several interesting cricket facts that would leave you baffled and amazed. Here we have compiled a comprehensive guide containing 10 quick answers & 7 questions to help you know them well.

Answer: Crickets are grasshopper-like creatures with flattened bodies. Crickets are often confused with grasshoppers because of a similarly structured body and large jumping legs. Unlike grasshoppers, crickets have their cylindrical bodies (1 to 2 inches long maximum), segmented in parts. A spherical head is paired with pointy long antennas (feelers). Both female and male crickets come with two forewings (stiff) and two hindwings (used for flying), covering their abdominal part. At the end of abdomen, you will find two pointy spikes known as cerci (abdominal sensory appendages). Its hind legs (that aid them in jumping and flying), along with three-jointed tarsal, are visibly stronger than the ones in front. Crickets come in red, green, black and light brown color.

Q2: How did they get their name?

Answer: They got this name because ‘cricket’ sounds quite similar to the chirps they usually produce. Let’s imagine their sound, “criket … criket … criket.” Hmm that’s interesting. Cricket is not the original word. This word is derived from an old French word, ‘crequet’. From crequet, it became ‘creket’ (a middle English word) and later it ended up on cricket.

Q3: How do they mate and reproduce?

Answer: Their mating session starts with a mating dance. This dance involves a unique mating chirp to allure the female partner. This whole session may last till the joining of the female partner. To receive the sperm packet from the male, the female cricket mounts on male’s back. As the spermatophore gets transferred into female organ, female leaves. Quite interestingly, a female cricket can mate for a number of times with several partners. She can eat or remove that sperm packet if she wants. And it’s purely on her will to decide which spermatophore she wants in her body, eventually. A female may lay eggs anywhere, in the plant’s stem, in dark places or deep down in the soil. Eggs will stay there for about two weeks. As the eggs are hatched (in spring), baby crickets (nymphs) will emerge. Most interestingly, baby crickets molt or shed their skin to grow.

Answer: Being omnivores, they normally rely on dead plants, fungi and other plants material. In rare cases, they may eat dead or injured crickets or insects like ants and aphids.

Answer: Crickets are usually found in summer season. They live in a number of places. These may include—scrub forests, fields, plants, caves, trees, dark and humid areas, pastures, yard debris, under or over the ground and under the rocks.

Q6: What are cricket predators?

Answer: Animals like lizards, tortoise, spiders, salamanders, wasps, rodents, frogs and even some species of birds eat crickets. The nutritional value (protein-enriched) of crickets has made them a favorite edible item for humans as well (especially the hunters look for them in the wild). Thus the food chain continues.

Q7: How do they communicate?

Answer: Stirdulation (chirping) is their way to communicate. They chirp to attract their females or to show their anger for rival male crickets. These insects produce this specific sound by rubbing their wings together.  Each wing of crickets contains a comb-like set of teeth (50 to 300 teeth in each set). When one wing is rubbed against the other, it causes stirdulation.

Crickets have been a part of human culture since ages. Particularly in Asian countries like China and Japan, people used to keep them in their houses as pets. In Chinese royalty, crickets were given royal treatment as they were kept in golden cages. Even today, crickets are considered a symbol of good luck in this region. Small bamboo cages are used for keeping these captive crickets. Even in Iberian Peninsula, a European country, crickets are caged as pets.

Cricket fighting is a famous gambling sport in which crickets are used as fighting animals. It all started from the Tang Dynasty of China. To start the fight, crickets are exposed to some specific conditions that ultimately add more to their aggressiveness. These conditions may include—complete isolation before fight or to make them fly forcibly (it is said, after flying, they fight for a longer period).

Cricket is not just an insect, it’s the nutritious and crunchy snack these days. People of countries like Thailand, Cambodia, Laos and Vietnam, enjoy eating fried crickets. Besides being human food, crickets are supplied to the pets, laboratory animals and to carnivorous zoo animals.

We have an age old bonding with crickets. Maybe that is the reason why crickets have been a part of various animated movies. Some of the most loved characters include—Jiminy cricket in the movie, Pinocchio and Cri-kee in Mulan. A rock-n-roll band was also named after it (The Crickets). ‘Cricket’, a US literary magazine for kids is also named after this insect. Even sports are not an exception. A baseball team in 1990’s was titled ‘Lubbock Crickets’.

Even literature is incomplete without crickets. The roots of crickets in literature go back to Tang Dynasty of China. ‘Du Fu’, a famous Tang Dynasty poet wrote some really touching and tragic verses, uttered by a mourning cricket. Later on several other big names from the realm of literature used cricket characters in their children books, poems (William Wordsworth and John Keats talked of crickets beautifully in their verses) and novels. Be it ‘The Cricket on the Hearth’ by Charles Dickens or ‘The Cricket in Times Square’ by George Seldon, crickets have been a major part of art and literature. They still are.

Crickets in folklore and myths

A lot of myths and folklores have been associated with the chirping of crickets. Here are a few of them;

In spite of being a significant part of human culture, there are certain circumstances where it gets essential to control these crickets.  Besides depriving us of a sound sleep in the silence of night, crickets are best known for damaging crops and other household items. You may find them anywhere as there are several types of crickets. The most common types you may encounter include—ground crickets, house cricket, bull crickets, mole crickets (most damaging for crops), tree crickets, bush crickets, teleogryllus oceanicus crickets, field crickets and red-headed bush crickets. Read on to know the best ways of controlling them.