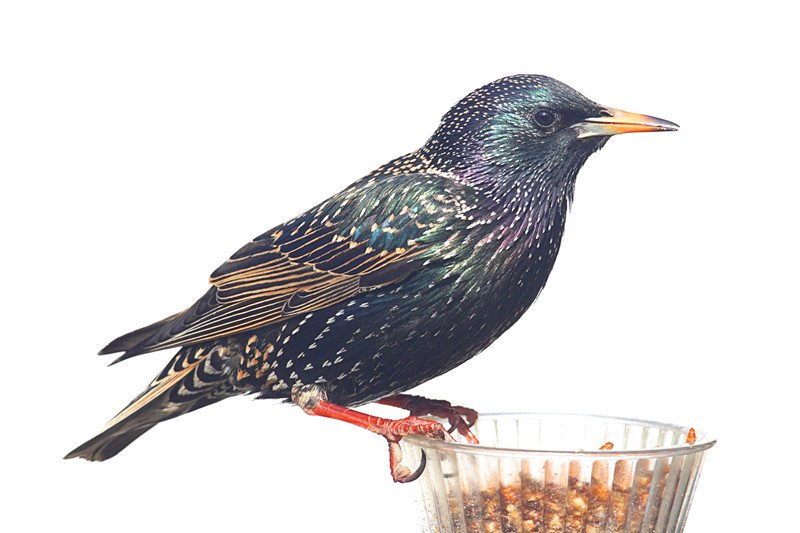 The sturdy black songbirds, amply found throughout the continent, were presented in North America for the first time. They belong to tyrant flycatcher family. The bold European starlings are adaptive to almost every kind of habitat. You will see them wandering around in the cities, parks, farms, fields, woods, and near your buildings, they are rarely seen in the deserts and dense forests.

People overlook all their amazing capabilities like sturdiness and malleability due to their abundance and aggressive and noisy behaviors causing a disturbance. Their wariness makes them successful as they are not easy to capture. Some unrelated blackbirds join them in their flocks, and European starlings often appear like them.

With the ability to bring variation in their appearance with the seasonal changes, European Starlings have a stocky body which is seen to have white spots all over the plumage during the winter season. When the summer months comes, the body color gets dark and shimmery except the Starling upper wings and Flacks. Their less-pointy wings make a triangular shape in sustained flight, and the tails are short. Their long and sharp gray beak turn yellow when winters come. 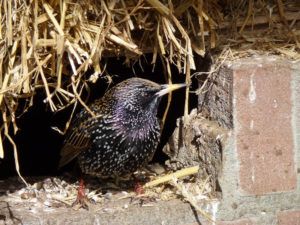 Since they can eat almost anything, the European starlings can abundantly be seen near human dwellings, fields, parks, open groves and the disturbed habitats where they don’t have to be deprived of food items. They don’t consider deserts and extensive wild areas in their options to forage and build nests.

They look for the suitable corners to make the nests in human dwellings, buildings and the places where they can find plenty of food. When searching for food, their primary targets are insects such as grasshoppers, butterflies, snails, caterpillars, spiders, earthworms and much more. However, in the case of insects are scarce they feed on fruits and seeds. Insects in their larval stages are their favorite during summer.

These noisy creatures make a massive flock to travel which is, sometimes, shared with the other blackbirds. Moreover, you may see them flying in the slight zig-zag line. They continuously whistle and make chattering sounds while moving across the field or roosting on the wires or trees.

Spring and summer are the favorable times for them reproduce. Female European Starling lay 4 to 6 eggs of white or blue color in one breeding season. All the eggs are not laid at one time; it is a daily process.

They reproduce twice a year, and both males and females incubate the eggs for 12 days. They don’t feel hesitation in laying the eggs in each other’s nests. Baby starlings can depend on both male and females for nourishment. The young gets independent in 21 days to leave the nest. Despite the fact that only a few nestlings survive during the breeding process, the adult can live the life of up to 2 to 3 years. Their survival up to 22 years had also been recorded. 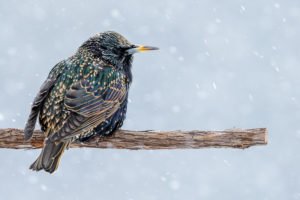 European starlings undergo the process of molting once in a year. In this process, the bird sheds its feathers which are replaced by the newly grown feathers. Molting occurs in the summer season. There are white spots on the black plumage of newly born Molt birds, and the spots start to turn dark when winters come.

Signs of a European Starling Infestation

If you think that these European starlings, the dazzling social songbirds are just there to wander near your place, then you should do a deep analysis of your house. If you see them near your home, that is an indication of their invasion in your place because they find the human dwelling an ideal location to build the nests.

They can be harmful to your building as well as your health as their droppings carry a fungus that can make you sick with various infections. Their droppings can likewise put your building structure at risk. If you see their nests in your building, that is a sure sign of pest infestation. Take the necessary measures before they cause resentment. 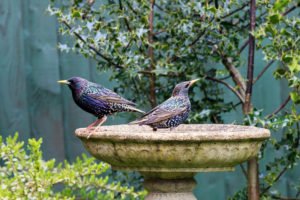 The association of starlings with the human dwellings will let them invade your house and create a mess that can make you go mad. You may have to face various problems regarding this, such as:

The Starling’s habit of feeding on fruits corns and plant seeds can lead to a significant agriculture loss. Their immense flock comprising of large birds, in search of food and roosting places, can invade your fields and can totally damage the crops.

2. A Large Quantity of Waste

They create a lot of mess when they collect material for their nests. A large group of Starlings means a lot of waste. Not only the nesting material, but other wastes such as droppings are likewise a problem. However, cleaning this mess is not a simple task, and you may have to bear a cost for this. 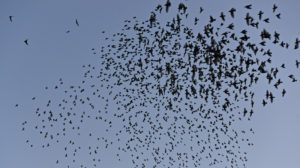 They are not only destructive to crops and building, but they can also cause severe health hazards. If they have nests in your building, there would be their wastes in your gardens. This untidiness contains diseases which can be transferred to humans as well as livestock. People can suffer from histoplasmosis, a respiratory illness because of the fungus present in their droppings. These disease risks are unavoidable.

Vocal abilities of these birds are high. They make various sounds and have skills to imitate the sounds of other birds. As they are mostly found in groups, their thrilling and chirping sounds commonly heard become louder and annoying when they all move together.

Natural Ways to Get Rid Of European Starling

The only reason starlings choose your home for nesting is the plenty of food and water they are getting from there. Remove their reason to be at your place. Eliminate the food sources such as the food of your pets and avoid open trash containers.

They keep on looking for the places in the building to make the perfect nesting for themselves. Observe the holes in your place that you can expect to be covered by starlings and seal them instantly. Do not leave any place unsealed because they can take the benefit of just one hole.

Every bird is scared of its predators, so are Starlings. You can frighten them with the artificial predators in your gardens such as owls. There are various devices available in the market which act as scary eyes, sonic devices, and Starling tapes repel birds and make your way easy.

If you see any nest in your building, take that away and try to trap the birds so that you can relocate them. Shooting and slow-acting poisons can also be helpful, but calling a pest control professional is the best way to remove them from your place.

This gel repellent is a sticky substance which makes the roosting places of birds bumpy. Apply the gel to all the familiar places of roosting. That solution is only to keep the birds away; they are not dangerous at all and totally invisible after applied on the surfaces.

These Starlings comprises of lovely colors and an attractive voice, yet they cause severe damages to your house and health. Their nests and wastes can give you a tough time to remove that mess. Call the professional pest controlling teams as soon as you come across their nests to get rid of these annoying Starlings.