When we talk about the difference between dove and pigeon, a general perception comes in mind is that a dove is a cute, peaceful and soft looking white bird while a pigeon is a feral and street bird that can be found in gray, blue, brown colours but not in white colour. Both pigeon and dove are the members of same Columbidae Family, which consists of more than 300 species of birds.

More often both the birds are confused with each other because they share same features like thick and round bodies, short necks, and thin beaks, but in ornithology, pigeon is said to be larger in size and dove are comparatively smaller. “Rock Doves” and “city doves” are the scientific terms used for pigeons. “Squab” is a term utilized for both young doves and pigeons. Both male and female pigeons can feed their babies with their milk.

People get confused between dove and pigeon, however, they are two different species and have a few distinguishing features.

As they belong to the same family of birds, their features are quite similar. They both have compact bodies, rounded heads with short necks, and thin beaks. They have biological diversity, and the slight difference in their appearance is their tale and size. Doves comprise of a big tail. However, its size is smaller than the pigeons.

Their size shows discrepancy by their species. Crowned Pigeon of New Guinea, can grow as big as a turkey and weigh around 2 to 3 kg. Contrary to this the smallest dove is as small as a hummingbird and weighs just 22 grams. The weight of the other species varies from the biggest pigeon to the smallest dove. Moreover, the color of their feathers varies according to their type.

2. Food And Their Predators

Seeds and fruits are the main diets of both pigeons and dove, however, there are types of a dove that feed on insects and worms. Peregrine Falcon is considered to be the hunter of pigeons that prey on the birds with their peak dive velocity. In addition to that, they are preyed on by other big birds and hawks.

Likewise, doves are a source of food for falcons and hawks, and sometimes rats and snakes happen to eat their eggs. Similarly, humans are one of their predators as well.

There is a large number of species of these birds found all over the world. Both dove and pigeons are adaptive to almost all types of environment whether the place is an island or a desert. Habitat can be different for different species. They find a suitable habitat in the cities and town, and that is the reason they are known to almost everyone.

They both can make a group containing 50 to 500 birds when they fly. Pigeons are considered to be intelligent birds and can easily be brought under control when kept as pets. Both males and females can feed the baby pigeons with their crop milk. They can also cause irreparable harm to the house owner when they make nest in such places.

Both these species make different and melodious coo-cooing sounds. Their calls can be different in changed situations such as they make the sound of “OORH” when the situation is alarming. Moreover, they make the “COO” sounds from their nests.

Different Types of a Dove and Their Features 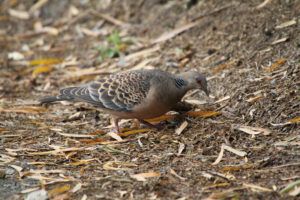 That kind of dove is mostly found in deciduous and coniferous forests. It is a large and chunky dove which has brown toned skin with black and white spots on the neck. The feathers are black with gray or red outer edges and have a pattern on their back. The tail is overall gray with white tips.

A breathtaking bird has different colors on its skin. The upper part is reddish brown with the shimmery shades of purple and green and the bottom is gray. Crown and the lower part of the throat are grey-red while the upper part is white. Furthermore, this bird has pink legs and feet.

This creature is quite tiny with grey-brown color all over the skin having the dark spots on the concealed part of wings. Their sturdy body consists of short tale, round wings, pinkish red short beaks. These species like to live in the areas with flowering shrubs and tall grown grass. 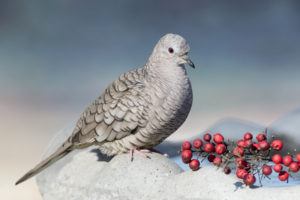 These are mostly found in arid areas. These doves are also small in size and have a light brown body with quite darker feathers. Edges of the feathers seem crusty, and the long tail has a square tip.

This is commonly found in eastern Asia like a local species. Their head is gray with brown color on the remaining part of the body. The lower part of the body is gray-brown, and the neck is in the same color having the shade of pink. There is a black collar with white spots found on the base of the hindmost part of the neck.

It looks similar to the mourning dove. Their grey colored body has the white patches at the tail’s square tips. They entails a half ring on the upper back, and the inner part of the wings is lighter than the remaining part.

These are adaptive to the woodland habitat. Males and females differ in their shape, color, and shade; males have chestnut brown skin while the females have relatively lighter brown skin. A yellow stripe is found under the eye on the side of the face. 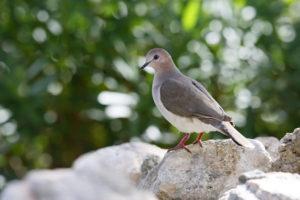 A large dove with the small head. Like most of the other species, it is also brown in color, but the lower parts of the body are pale. The tail is the medium-long size and has white colored tips. They spent most of the time on earth.

The White Winged Dove is a beautiful pigeon with light greyish-brown above and gray below; adults have an attractive patch of blue along the wings and featherless blue skin around eyes. They have bright crimson eyes. They are abundantly used as food and for hunting.

The mourning dove is also known as the American Mourning Dove. Rain Dove is the most popular breed of pigeon. Mourning Dove, usually is medium sized and has a light gray and brown color; the beak is short and dark.

The Rock Pigeon gets its name from Ancient Greek “Kolumbus” meaning ‘Diver.’ This 11-15 Long and 24-28 Wide Grey colored, orange eyed bird have been used for Domestic as well as military purposes for thousands of years. Due to its carrier usage, these pigeons were also named as War pigeons as they carried important messages during wars and used to receive gallantry awards for their service. 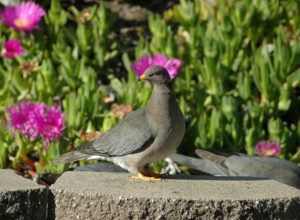 The Band-tailed Pigeon is found in 900-3600 m heights in Oaks, Pine-oaks, and forests. It is gray in color with shades of dull pink under the head. It holds the honor of being the biggest pigeon in the North America (up to 16 in).

This pigeon is of the quiet type with a low Owl-like pitch. They lay two eggs and build home with twigs. It forms flocks when there’s no breeding season. It migrates for either the acorn crop or lower altitudes during the season of reproduction.

The white-crowned pigeon is the same size as of a common Rock Pigeon but weighs a little less as it has lesser wingspan, smaller meat, and a longer tail. Distinguished by a beautiful white crown on the head a white iris and is dark gray in color.

Red Billed Pigeon is wine-purplish with a brown colored back and a tail in gray. It has red eyes and legs. It lays a single white egg and both the parents ‘pigeon milk’ the young ones. It has a distinct and peculiar coo-cooing sound used as a call. It makes its nest 8-42ft high on some relatively flatter branch using twigs.

Both pigeon and dove are ground dwelling species. Pigeons had shared a relationship with humans in history when people used them to deliver their messages. On the other hand, the pure white dove is a symbol of peace. The actual scientific difference between them is that they both are the different kinds of the same family and have a slight difference in their appearance.

These species have been hunted by people on a large scale. Conservative programs are being carried out in numerous countries to save them. People use these birds as pets, and some find them causing a nuisance at their place and want to get rid of them. People also hunt them to enjoy their meat.