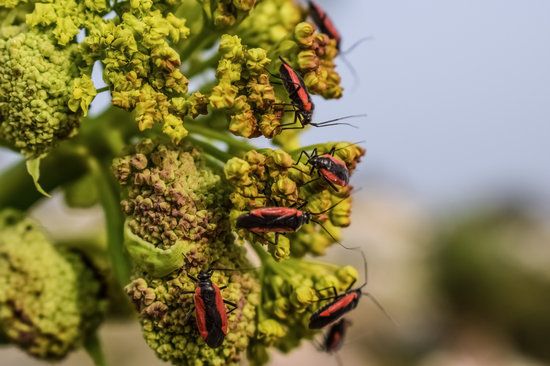 Dermestids, skin beetles, hide beetles, and carpet beetles, all these names describe the beetles of the Dermestidae insect family. The name Dermestidae gives a pretty clear idea of what these insects actually are and what are their attributes.

Dermestidae could be broke down into something like this：

Hence, Dermestidae is the members of the insect family that consume skin. They reproduce in numbers, so a particular nest can have thousands of larvae. There are around 700 species of Dermestid beetles and in the US alone, there are around 120 species of them.

Dermestids beetles are scavengers as they feed on dead animals and cadavers. Thus, they play a crucial role in cleaning up the environment. Outside, the larvae of dermestid feed on hair, fur, horn, feathers, or skins of the dead animals and even other insects.

Dermestids are very unusual insects as they also feed on feathers and hair. These are something avoided by every animal species because they are indigestible. Keratin present in feathers and hair makes it difficult to digest, but dermestids have powerful enzymes in their digestive tract which allows them to easily digest uncommon things.

The larvae, on the other hand, have a wedge-shaped body covered with long tufts of hair on their back. The size of the larvae depends on the species. The larvae are usually bigger than the adults, around 12 mm long.

Like other beetles, the dermestid beetles like warm conditions. They become active during the summer or spring time. They spend the entire winter in clefts and cracks. Summer is the time for the females to lay eggs and they enter structures or homes to lay eggs and seeking food. Depending on the species, the larvae after hatching can develop through 5-15 instars.

Identification of dermestid colonies is very easy. They usually shed their cast skins (larval skins) near the food source. This might be the only sign of dermestid infestation. Pupation of these beetles occurs in their last cast skin. The adults after pupation have to feed on pollen and therefore, the beetles trapped indoors can be seen attracted to light or near the window sills as they are trying to get outside.

There are hundreds of species of dermestid beetles but only half a dozen are found in buildings and homes. Some of the species are worldwide in distribution as they mostly are carried around with food products (stored). The dermestid beetles mostly feed on dead bodies, but over the years, some of the dermestid species have expanded their preference for food. Hence, they feed on plant extracts and protein. In homes, they are found infesting on spices, seeds, nuts, grains, and flour. Moreover, certain species even infest cotton and silk.

Their ability to digest keratin makes them the most unusual animals. They can burrow holes in carpets, blankets and wool clothing. The homeowners  have to forcefully call the pest control because of these beetles chewing down their carpets and rugs. Those living in hot and humid condition may experience the infestation of cloth moths.

In homes, the dermestid beetles are often found in closets where garments are stored, especially woolen or in bedrooms where hair accumulates. The adults are difficult to locate in the house and it is the cast skins or larvae that are found. People often mistake dermestids for bed bugs and therefore, they look in wrong places.

Because dermestids mostly feed on accumulated hair and feathers, it is better to look at the places your pets visit and sleeps. It can turn out to be problematic when people have indoor pets.

Dermestids don’t bite humans or burrow into the skin, but they can cause rashes which are very itchy and bumpy and can annoy us.

On the other hand, their hair fibers are the reason why people become allergic. The setae of dermestids are airborne and their prolonged infestation in a house means that people can experience certain eye and respiratory infections. However, it is a slow procedure and can take years for you to become sensitized with these setae fibers.

How do People Come in Contact With Dermestid Beetles?

Most people don’t know but dermestid beetles can fly. An adult dermestid beetle can fly up to 3 miles, thus; they can easily enter homes and buildings. And since dermestids are overwintering pests, they get motivated to enter the buildings every year. The families who don’t have performed pest control over the years, their homes are prone to becoming hosts to these beetles. They might be living inside the walls infesting wasp nests, rodents, birds, and insects, all dead.

However, these insects do not pose any threat until they decide to move beyond the walls. They will lay eggs near the fertile areas where the larvae can easily access the food source. Things like blankets, clothing, silk sheets, wool, upholstered furniture, and carpets are a major food source for these insects.

Moreover, they are even found infesting synthetic fabrics given that the fabrics have foods, oil or perspiration soaked into them.

Can Dermestids Cause Any Other Harm?

The nickname for Dermestids is Pantry pests and yes they can cause harm to humans in other ways. Since the adults can fly, they can easily raid the pantry or kitchen, lay eggs near the easily accessible food source. Some of the beetles can bore through the tough food packaging, making a passage for other insects. They target milled products, animal food, and seeds.

Dermestid beetles love to reproduce near an easily accessible food source. Therefore, before laying eggs, the females find a place which is very close to the food source. Once they manage to locate the desirable place with plenty of food, they look for a warm place to lay eggs. The warmness doubles the incubation process. Female dermestid beetles are able to lay around 150 eggs at a time. These eggs are incubated for 10-12 days before larvae start to hatch. Once they are hatched, they will immediately search for a possible food source. They will infest on something which is closer to their nest. They will feed anything they find in hope of growing up quickly. They eat all kinds of fabrics and fiber like linen, silk, and wool. Moreover, these larvae have a thing for cocoa. They will attack the products containing cocoa in it.

As they grow, they will eat twice their body weight or even more every single day, and hence, they reach adulthood within 14 days. Once they are grown up, they will feast on different components like flowers and plants. Also, it is the time for them to seek a suitable mate in order to repopulate the species.

If you want to prevent them from invading your house, make sure that there are no wet locations in your house, except for the bathroom. Store the food items in cool and dry places. Make sure that woolen or silk items do not come in contact with any kind of wetness. Once they find a location, it will be difficult for you to stop the infestation.

How to Get Rid of Dermestid Beetles?

Dermestid beetle infestation just like any other pest infestations is very frustrating, inconvenient and also cause certain damage to our homes. These beetles are notoriously known for infesting all kinds of clothing and fabric items.

As dermestid beetles are known for causing a lot of fixture and fabric damage in your house, it is necessary for you to know determine the indication or signs of the infestation

One of the easiest ways to determine dermestid infestation is to look for their feces. They eat more than twice their weight and therefore, they defecate a lot often. However, their fecal pellets are not larger than a grain of salt. But you will experience the accumulation of fecal pellets in their infestation place.

On the other hand, you will also see the accumulation of cast skins near the infestation area. If you see these indications of cast skins or fecal pellets near the carpet, rugs or furniture upholstery, then it is confirmed that your house plays host to the dermestid beetles. For further signs of infestation, you can look for small chewed patches or cocoons.

What Are the Damages Caused by Dermestid Beetles?

Dermestids possess the natural tendency of feeding on fabric items. This makes them one of the troublesome pests for households. The following is the list of the items in the household infested by dermestid beetles.

Carpets are the most vulnerable household product prone to dermestid beetle infestation. As carpets are placed with extreme proximity to the floor, it attracts dust, oil, and other food items. Carpets cover the maximum floor area, thus; it makes it an easy target for the beetles to infest without getting spotted. Dermestid beetles tend to infest on certain woolen items that are not used frequently. They will probably infest on everything that has fabric in it. Items like mattresses, curtains, traditional furniture filings, etc all are susceptible to damage caused by dermestid beetles. These beetles can fly and therefore, your food items in the kitchen cupboard are not safe from getting infested. Some of these beetle species can even bore a hole into the protective packaging. Items like cocoa and spices are more prone to getting infested. Getting rid of Pantry Dermestid Infestation

The pantry beetles infest on food items. These beetles are brought home unknowingly. And once they find a suitable location near the food source, they make colonies. It is necessary to eradicate their infestation as they can harm the food we consume.

Getting rid of Carpet Dermestid Infestation

The carpet beetles colonize near their food sources like carpets, rugs, drapes, curtains, and wardrobes with woolen and linen clothes. Thus, before you perform the treatment, you should perform these basic yet recommended measures. Recommended Insecticide Products to Get Rid of Dermestid Beetles Mix some insect growth regulator with your regular insecticide before you perform the treatment.

The growth regulator will prevent the dermestid beetles from rebounding.

For managing an existing infestation, you can use the following methods and procedures.

Dermestids are beneficial creatures for the environment as they help in cleaning up the dead plants and animals. But over the years, due to urbanization, these beetles have found human houses as the easy targets. Our houses prove to be quite a host to Dermestid beetles as it is one place where they can infest on their favorite items without any worries. Houses prove to be a perfect hiding spot for them and hence, giving us the cerebral pain.

Once they infest the homes, it becomes difficult to get rid of them as they are everywhere. Also, once an object is severely infested, it should be properly disposed to ensure that other objects and products inside the house or building are not infested.

In case, if you feel like things have gotten out of hands, you should immediately consult an expert pest control service provider as these beetles hold the power to cause severe damage to your house and its essentials.

Last but not the least, as you know these beetles carry airborne setae which is the major cause of allergies. If you experience something like irritation in eyes or respiratory system, then you should consult a doctor as the allergy may remain uprooted for some time if not treated.