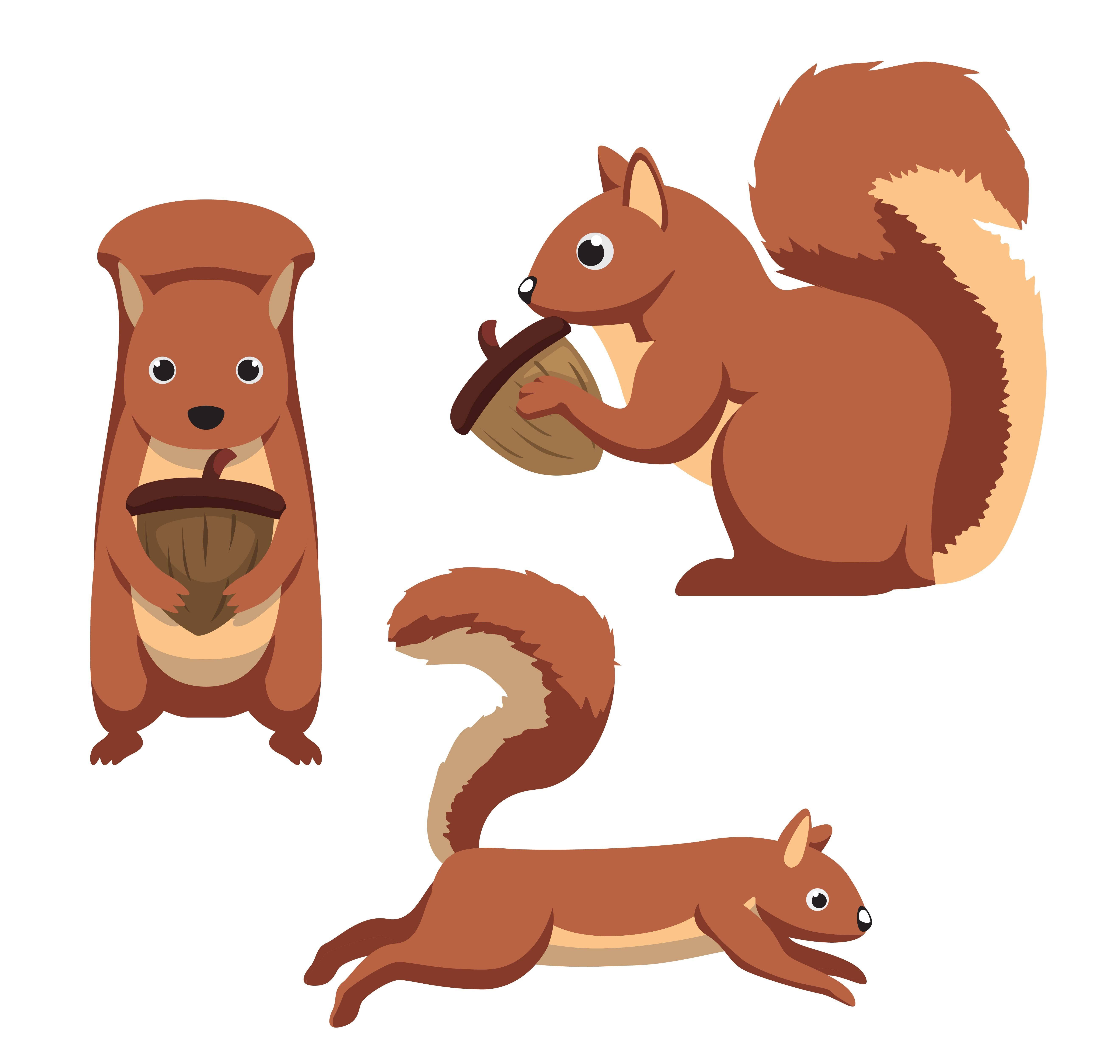 Almost all of us have seen squirrels many times in our life. They are cute, tiny and naughty creatures. They can be found easily running or jumping quickly from one tree to another within a blink of a human eye.  These adorable tiny creatures are rodents and belong to the Sciuridae family. Sciuridae family includes small to medium sized rodents like chipmunks, marmots, and prairie dogs. The origin of the word ‘squirrel’ is from the Greek word Skiouros that means ‘shadow tail, and most probably squirrel has been named after their unique furry tails. The squirrels are earliest known rodents, and they can be date back to Eocene period.

The most prominent feature of squirrels is their four front teeth that grow continuously and help them to crack nuts and tree. Squirrels got exceptional eyesight, spiked ears, hairy tails and flexible hind legs. These features help them to run and move quickly from one tree to another. Furthermore, they own four toes on their forefeet and five toes on rear feet. They are both mammals and omnivores and fed on anything they find, but because of being an inhabitant of trees, mostly you will see them eating nuts, pine cones, seeds, roots, insects and other stuff like this. However, sometimes they can also feed themselves by eating newborn birds and birds’ eggs.

Squirrels gestation period vary from species to species. It depends on size, but usually, it is around 40 days. They can breed twice a year, once in a month of February and March and the other in the June and July. Mother squirrel can give birth to minimum two, and maximum eight juvenile squirrels and they are totally dependant on their mother for their survival for almost a period of two to three months. So keeping in view the number of kittens (baby squirrels), and a number of breedings in a year it can be said that squirrels have vigorous population.

Different types of squirrels living in the US

According to Integrated Taxonomic Information System (ITIS), currently almost more than two hundred squirrels species are present all around the world, and they can be divided into three major categories and many further sub-categories. Among all variety of squirrels present in the world, the major difference exists is their sizes. There are squirrel species that is as short as few inches long and on the other hand is an Oriental giant squirrel species that looks like a cat because of their enormous size. These giant squirrels belong to group tree squirrels. Three major categories of squirrels are ground squirrels, tree squirrels, and flying squirrels. The sub-categories are numerous like Douglas, Albino, Antelope, Idaho, Rock, White and Black, Spotted, Richardson and many others.

If we talk about common squirrel species peculiar to the US then we can say, the US is a residing place of five different species of squirrels. These five different species includes red squirrels, gray squirrels, fox squirrels, flying squirrels and ground squirrels. These squirrels differ from each other in term of characteristics. However, basic features like legs, eyes, ears and sharp claws are similar in each category. Here we will discuss these squirrel species in brief along with those characteristics that differentiate them from each other and according to which they are classified.

The squirrel species with the most beautiful and vibrant colors are the red squirrel. They are tiny, adorable and contain fur that changes its color with the changing weather. In winters their fur becomes gray-red, and in summer it becomes orange-red with a white color on the belly area. Furthermore, they also develop the bunch of fur on their ears during a winter season. The other name of red squirrels is pine squirrels, and they usually exist in the pine forests of northern states of US that are considerably a colder area. Other features of red squirrels are:

Fox squirrels are found almost in all regions of United States except the eastern coast. Among all other squirrel species living in the US, Fox squirrels are the largest one with the body size of 17 to 27 inches. They possess two different color groups. One group has dark-coloured fur with various shades of color like gray, tan, and black while underneath is of gold color. The other groups contain squirrels with reddish, or orange colored fur. The former group possesses black colored heads with ears, feet, and noses being white in color. Few different tips to identify them are:

How to identify squirrels in your property

As we have already mentioned, squirrels can be seen and found anywhere and almost all around the world. They can live anywhere from a rural area to urban area and from highly populated area to forests. Being friendly in nature, they are quite familiar with human beings, and because of this habit, they sometimes can create a serious problem for you when they start living in your property region. It can b your office, home, flat and any other place. In your home, they can be commonly found in the upper story of your building, and the reason is quite obvious; their ability to climb at heights easily and quickly.

Because of their adorable looks, we might love to see them playing around the trees, climbing and going down. However, they can be serious trouble if they start residing in your home/property because in that case, they will start chewing your wood, papers and other important stuff, as you should not forget their excellent chewing abilities. Therefore, it is necessary to keep a sharp eye on every corner of your property to check if they have started residing at your location or not. Here are few tips to check squirrel presence in your home.

The damage squirrel will do on your property depends on a type of squirrel that has invaded your area. For example, if the squirrel that is hiding in your territory is tree squirrels then most probably it will damage your upper portion mostly. As they like to dig holes, they will do same to your house. They will dig a hole anywhere and would cause severe damage to your property.

Squirrels can also be tracked through their voice. They make annoying sounds when any other animals try to attack or enter their location. Through concentrating on a sound that they produce, you can easily identify them. Additionally, you may use tools to call the squirrel. These tools are designed in such a way to make noise similar to the squirrel call.

To track a squirrel a piece of cardboard with the flour spread on it can help you out. Place it anywhere around the area being suspected as a squirrel residence. When squirrel moves over its feet will make a track and as it has already mentioned their rear feet contain five toes and front include four toes, presence of squirrels can be identified.

There are few facts about squirrels that are unknown to many people, but they are interesting and unique to know. Few of them are mentioned below: