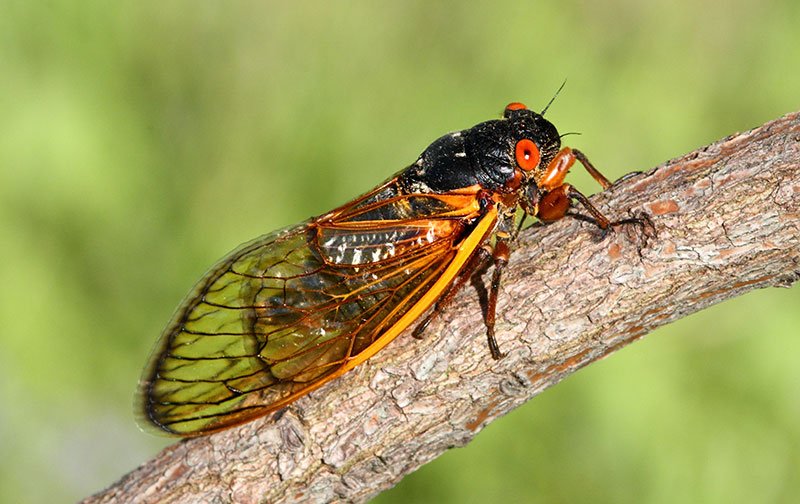 If you have ever lived in the specific area where the cicadas have shaded in a large number of quantities, then you will know a fact that what an experience this can be. But if you have never experienced that, then you will know some unknown facts about the insects. The insects are harmless to the human being. These insects are merely known for their singing. One of the interesting facts about these insects is that they love the Sun and that is why they generally sing during the daytime. But besides that, they usually do not like the harsh temperatures, if they are extreme positives or extreme negatives. They love to live in the medium temperature, when they come out.

Cicada is a specific insect belong to the order Hemiptera as well as family Cicadoidea. It gets characterised by the presence of enormous eyes that have been placed apart on the head along with transparent veined wings. They live in the tropical temperature, and one of the significant facts about the insects is that it gets easily distinguished from the other insects because of the large size as well as acoustic features.

They are often known as jar flies of the July flies in the Southeastern United States as well as heat bugs in Canada. They are also related to spittlebugs and leafhoppers. The insects are kind to human beings, and they usually do not sting or bite humans. Cicadas are quite loud, harsh as well as relentless insects and also well-known for a sound that they produce, which gets termed as mating calls. It also provides active and lively sounds when there is a significant possibility of attack and to only contact some other males.

Cicadas are recognized to cause some damage to the cultivated crops, trees, and shrubs by the forming scars. The female lays eggs on the leaves. The female cicada gets very much savored as food. The name cicada has been derived from the Latin word meaning buzzer. Eventually, the adult insect has also recognized as the imago as well as measures 2-5 cm in length. Some of the species can quickly reach to the range of 15 cm even. They have large eyes that have been placed apart on the head, and short antennae are also there in front of the eyes along with the wings are membranous. They have three OCELLI only in front of their eyes, which entirely resembles the color of their eyes. Desert species are considered cooling their bodies by sweating while some of the other species are known to raise the body temperature to almost about 22°C above ambient temperature.

1. Do cicadas come out every year?

Cicada has the peculiar nature that they do not come out every year. They come out once in 13 to 17 years, and the exciting fact is that they live underground for almost 13 to 17 years in their larvae form. There are various species of Cicadas available like the periodical cicada. It emerges from the ground once in 13 years. The periodical cicadas are entirely different from the common cicadas. There is also another species available that is called annual cicada, which come out almost every year. Both the 17 and 13-year an insect gets categorized by broods, or even groups of cicadas, which have the same appearance year.

If you analyses correctly, you will get to know that there are twelve various broods of 17-year cicada and along with that, there are three various broods of thirteen-year cicada available. So, their lifecycle is not very simple. Besides, there is no such specialist predators wait for the bugs to eat at the end of their life cycle. But that does not mean the cicada is not food anymore. Cicadas are very kind to the humans being, and they usually do not sting or even bite the human. But besides that, they can bite a person by mistake. They bear long proboscis for only feeding under their heads for feeding on the plant sap. If the proboscis has gets inserted into the human's body, this is painful but not harmful. While talking about being harmful, the Cicadas do not come in the list. As a matter of fact, the insect does not have any stingers like bees and jaws as well. So, they are not able to harm the human body. They cannot attack with their stingers. Basically, their face is just like the straw, and it helps them to suck the plant juice as well. A cicada cannot eat human flesh or blood too because blood is too thick for them. The cicada comes along with the straw shaped face and with that, they suck the plant juice. Eventually, according to some Entomologists, the cicada often tries to pierce the human body by thinking of a tree, but while trying to suck the blood, they can die as well. Their mouth is not healthy to suck the blood, and that is why humans are merely safe from them.

Apart from their mouth, a person can get scared of their feet because it is pointy and sharp. If you ever think that they bite you with the sting or feet, you might be wrong because you may have bitten by cicada killer wasp. It is one of the enormous wasps, which chases the insect always. They paralyse you first and then attach themselves to the adult cicadas as well.

Though the cicada is entirely safe and secure for the human beings it can damage the trees below and above the ground as well. They insert their long trunk into the plant stems to feed on the juice. Cicadas can also damage the cultivated shrubs, crops, and grasses. They injure the trees by damaging the branches while the females lay the eggs entirely deep in them. The female cuts split right into the bark of a twig, where she gathers the eggs. She might do so repeatedly until she has laid a hundred eggs. It damage causes the twigs to split and resulting in flagging. It can be specifically harmful to the young plants. Cicada starts its life with an egg, which is shaped like rice, and it has been gathered by the female in the trench. She lays the eggs and deposits it properly, and one of the interesting facts about the process is that the cicada makes in the tree limb by using the ovipositor. So, after that, the trench offers the shelter and then exposes some tree fluids that a young cicada feeds on. Eventually, the small groves can also slay the branches as well. Once, the branches croak, and it leaves turn absolutely brown, this is termed flagging.

Once those eggs hatches, cicada starts feeding on the fluids of the tree. And precisely at that point, the eggs look like a little white ant or even termite too. After a particular point in time, the cicada gets ready, and it starts crawling right from a groove. After that, it jumps to the ground, and they start searching their food after falling in the field. They start digging until and unless they find the proper roots as food. And once they get their food, an absolute unusual thing happen with them. They will enter below the ground and stay 2 to 17 years right based on the species as well. One of the interesting facts about them is that they are quite active in an underground, digging as well as feeding.

After two to seventeen years, the cicadas arise from the ground only as nymphs. The nymphs hike the adjacent accessible tree and start to shed the nymph exoskeleton. So, free of the old skin, the wings of the cicada will expand along with the fluid as well as their skin will also harden. Once the new sides, as well as the body, are ready, it can start their brief adult life. The Adult cicadas are also called the imagoes, and they spend the times in tress by looking for the mate. Once their development gets done, they start developing from the ground as the as white-colored nymphs. Only males are considered to produce the sound. They also provide sound approx. 120 db. The noise generated by the cicadas can lead to the permanent hearing loss in humans. After mating a female lays eggs right in the bark of the tree. She lays many hundreds of eggs that hatch right into some tiny nymphs, and it drops to the ground. The last life cycle of the cicadas takes approximately 2-5 years to complete. Some of the species might take 13-17 years to complete their life cycle. While talking about the predators, you will surely know the fact that the wasps and birds are known be the topmost predators as well. When it comes to knowing about various life cycles of the insect, you will get to know that there are almost three types of life cycles.

It is one of the primary and universal life cycles of cicada. However, the cicada comes out after 13 to 17 years, but in this specific process, the life cycle arises almost every year. Amongst the cicadas, Swamp Cicadas, which is also known as the Neotibicen Tibicen occur nearly every year in. The Neotibicen Tibicen emerges in the United States and the Green Grocers, which is also known as the Cyclochila australasiae arises in Australia in every year.

After knowing the life cycle of the insect, you will have to know about the periodical cycle. In this particular process, the entire life cycle arises all together right after the long periods. There is specie called Magicicada septendecim, which arises every seventeen years

Cicada species along with the proto-periodical life cycles may arise every year. Specie like Okanagana will occur at heavy numbers as well.

5. How Many Cicadas Are There? Almost 190 variants are there in United States of America and dozen in Canada. If you find in Australia, you will get to know that hundreds of cicadas are there. But while estimating worldwide, there are almost 3,390 variants available.

According to the predictions, periodical cicadas or "seventeen-year locusts," those Methusalehs of an insect world, are again arranged to make the appearance in many parts of the country. The government has tabularized no less than thirty broods of the spectacular species and state entomologists who have located them and then studied the activities as well as checked up on time over periods of a lot of years. The cicadas are quite a mysterious insect, but the mystery of all this actually can easily be explained if you watch the entire action of this remarkable insect for a while snooping into their personal affairs and then getting a line on their habits and life history. For those who have never met the periodical cicada, it is quite enigmatic to them.

It measures about one, or you can say one-half inches long, have the dark-coloured body and also an abdomen banded along with orange. Like the other insects, this has six legs along with which to walk about and is among the number, which possesses four wings, two on each side. The wings of cicadas are shiny and transparent with the orange colored veins at the base and front margins and it blends into brown as they grow smaller. The Brown markings resemble the letter “W, “if your imagination is quite good, might be seen on each front wing. It has been interpreted by the superstitious as a forecast of war. One of the interesting facts about this insect is that it is entirely edible. A considerable number of chefs out there create some dishes with this as a primary ingredient. Cicada has no jaws but takes the food along with the slender reddish colored beak used for piercing plant tissue and then sucking out its juices.