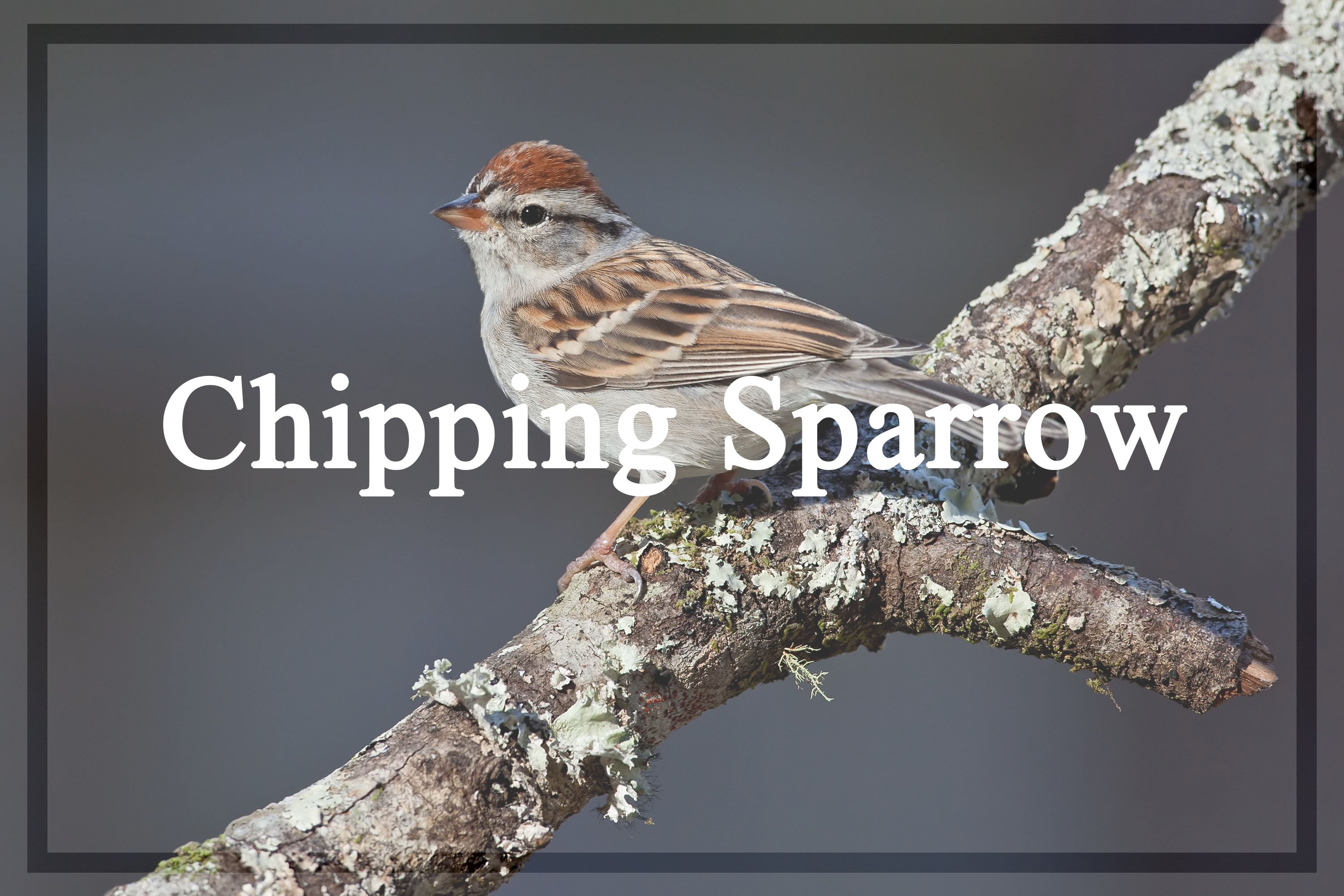 Chipping Sparrow is a medium-sized, lean sparrow containing dark-colored back and underparts with lighter color tone. The back of chipping sparrow are usually dark brown in color with black color streaking, and the underparts are normally light or pastel gray in color. Cap of their head is reddish-brown in color with the backside of a neck being gray in color. Chipping sparrows’ face is striped with white and black color and neck is white. Their beak is black, eyes are dusky brown, and legs and feet are pink-orange in color.

The body length of chipping sparrow is 14 cm or 5.5 inches, and body weight is only 11 grams. The shape of chipping sparrows’ beak is conical, wings shape is rounded, and the tail is shaped like a fan. They produce a loud sound like chip-chip, and it can be heard commonly during springs in forests and other areas enriched with trees. The young chipping sparrows are tough to differentiate from other little sparrows as baby chipping sparrow contains light brown color on their whole body and eyes are striped black. However, adult sparrows can be easily identified with the help of their bright-colored cap and distinguish facial features. Both genders of chipping sparrows look similar. 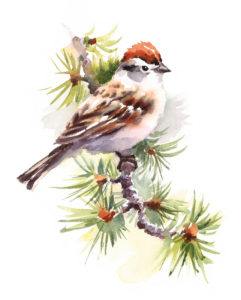 How Does Chipping Sparrow Behave in Spring, Fall, and Winter?

During winters, chipping sparrows has to migrate, and it is a non-breeding season, they can be seen in the form of flocks of almost 25 to 50 birds. However, during spring as it is their breeding season, they can only be seen in pairs. They eat, fly and gather eating material together with their mate during spring. Furthermore, according to changing the weather, they not only change their behavior, but their appearance also changes.

During mid of the May, male chipping sparrow returns to regain their territories for breeding. Female chipping sparrow usually returns through migration one or two weeks later than its male partner. After the arrival of both partners at the location, the male starts interacting with the female partner. Song deviation completes the courtship process of chipping sparrow. After that, the couple flies together to collect their food. Mating of chipping sparrows happens right after courtship process is completed. They usually perform mating on ground, wire, roof, and tree branches. Their mating process occurs several times a day before laying the eggs. Chipping sparrows are not considered monogamous in nature, as both male and female partners have been fond searching for further mating partners. After mating, both partners start searching for a suitable place to build their nest, and nest building starts after it in which they give birth to their babies and nurse them.

There are no field marks that can distinguish male chipping sparrow from the female one. However, this sparrow species can be distinguished clearly from other species of Spizella through their bright reddish-brown colored crown. The dark colored lower boundary of this crown piercingly draws up the boundary line with white colored front bone around sparrows’ eye region. Furthermore, other field marks are light-colored underparts that vary from gray to whitish gray in color and the black color of its beak. The song pattern of chipping may sound similar to that of a pine warbler. If we hear chipping sparrow song in the habitat of pine warbler, then surely mistake chipping sparrow for pine warbler.

What Does Chipping Sparrow Eat?

Chipping sparrows are highly adaptive to a wide variety of foods. They can consume seeds of fruits and different plants. During breeding season, they also consume different insects like Coleoptera, Orthoptera, Lepidoptera, and range of other invertebrates. Chipping sparrows search their food usually on the ground and lower branches of trees. They also eat a small quantity of sand and stones. Chipping Sparrow also consumes seasonal fruit, nuts, and grains. They also sometimes consume other birds’ feeders hanging in gardens and parks. 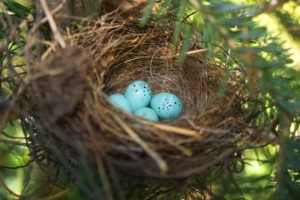 Chipping sparrow usually gives two to five eggs per clutch. As soon as they complete building their nest, they lay their first egg on the very next morning. Until the completion of the whole clutch, chipping sparrow lay eggs daily. The common number of eggs per clutch is three or four. Whereas, two to five numbers of eggs per clutch is quite uncommon. According to one research, some eggs per clutch during the month of May is 3.81, and it decreases to 3 during the month of July. Eggs of chipping sparrows are vaguely shining, and oval in shape. However, few are slightly less ovate as compared to others. The base of their egg is bluish green, with freckles, blemishes and a small number of squiggles of dark brown, purple, and black color. These markings are mostly located at a larger end of the egg. Their eggs also contain under markings of light gray color. Mostly their eggs are scarcely marked. However, few contain very sharp definite markings and in some cases, unmarked eggs have also been spotted.

Female sparrow usually performs the incubation of chipping sparrow on the day when it laid its last egg of clutch. The days of incubation period largely depends on the atmospheric temperature. Higher the temperature, lower will be the period of incubation. Usually, this period varies from 10 to 12 days. During the incubation period, male sparrow feeds its female partner while she stays at the nest to protect baby sparrows. Both parents nurture baby chipping sparrows, and they start leaving the nest after 9 to 12 days. However, parents continue to feed their young one for the further three weeks after they start taking flights.

Chipping sparrows usually build their nests in conifer or on any shrub located one to three meters higher than ground. However, it can be as high as 60 feet. Mostly their nests are built by female chipping sparrows that use a variety of material to build its nest. While in the meantime, male sparrow helps her in collecting material. They build compressed nests using covering material consist of grass, thick vegetation, weeds and even with hairs of different animals. Their nests are made up of fragile stuff that even allows light to enter through their nests. Few male sparrows also possess more than one mate, that’s why their nest places also change.

Chipping sparrows are attacked by a large number of mammals, snakes, and birds. Their predators not only attack adult shipping sparrow, but they also attack their eggs and little nestlings. Those predators that attack adult sparrow include prairie falcons, cooper’s hawks, loggerhead shrikes, red-squirrels, American kestrels, domestic cats and thirteen-lined ground squirrels. Whereas, nestlings and eggs are attacked by different species of snakes, crows, cats and Jays. Usually, if the first clutch of chipping sparrows fails because of eggs being consumed by predators, they build a new nest and attempt to lay the second clutch.

After the baby chipping sparrow hatches, it can only perform one activity, and that is to yawn weakly. These young sparrows are fed straight away after their hatching by their parents. In the early days, male sparrow usually feeds their babies, while female sparrow performs brooding. During their early days after hatching, they are brooded almost most of their time. This brooding decreases by the day four, when a female sparrow protects them only from direct sunlight. At the time of hatching, the muscular system of chipping sparrows is weakly developed, and they stay motionless. After the fourth day, their muscular system starts to grow rapidly. By the 5th day, they gain the capability to regulate their temperature. By the 6th day, young chipping sparrows become fully active and movable.

The plumage of chipping sparrow looks quite similar to field sparrow, and it becomes difficult to identify them. The only difference lies in their striking patterns that are much more prominent, sharp, and dense at both upper and below sides of their bodies. The plumage of baby chipping sparrow can be defined as brown colored back, a grayish area around a neck, crown of chestnut and body being covered with dense striking. The lower body part of a baby sparrow is lighter gray in color and feet are orange-pink in color. The plumage of baby sparrow starts modifying from the eighth day to eight weeks after their hatching.