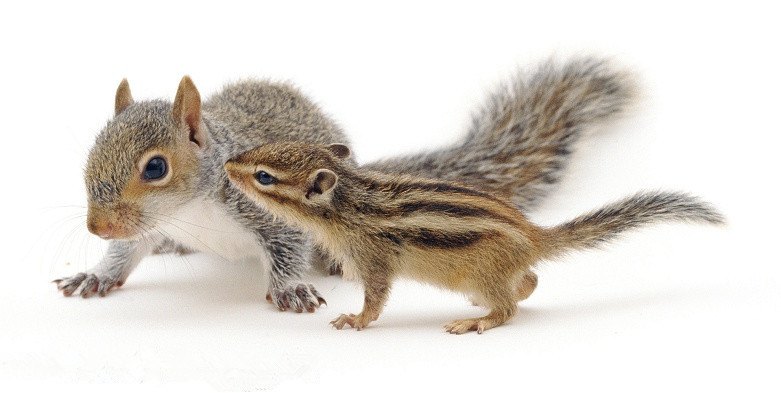 In the suburban areas, homes with backyards are full of squirrels and chipmunks running through the trees and often found in the attics. Many of us do not know what the difference between these two creatures is. Both are mammals, having furry bodies and bushy tails, both feed on a nutty diet, and belong to the same biological family. Since most of the things are common, it is tough to distinguish between the two. The apparent features and look of both leave the person watching them baffled. However, with careful observation and study, it becomes clear, that both of them hardly share any common feature except for the biological family.

Chipmunks are smaller in size as compared to the squirrels. Unlike the squirrels that stay either on the ground or in the tree trunks, the chipmunks dig holes in the ground or prepare the nests. It is just like comparison and contrast between the mouse and the rat. Chipmunks are mostly found in the North American and the Asian Region. They are distinguished for having small stripes all over their body. These stripes run all over their head, back, and the tail. Their classification is either based on the single genus named Tamias or the three of them. In contrast with the chipmunks, the ground squirrels are usually found in the wooded or the rocky areas. They have stripes all over the body but not on the head, which helps to differentiate them from the chipmunks. Their eyes have a beautiful white ring around them too. Their tails are prominent than the chipmunks because of the comparatively larger size of the tail.

Despite these differences, the standard features that are found in all include the furry bodies and short ears.

Squirrels and chipmunks both belong to the rodent family called Sciuridae. This family is characterized because of the rodents that are either small or medium sized. As far as the chipmunks are considered they have 25 species mostly found in North America. There are some species native to the Asian regions of Siberia. On the contrary, the squirrels have 285 species which are typical residents of South and North America, Africa and Eurasia. Chipmunks are usually living near the outskirts of the woodlands and the backyards. The squirrels on the other can accommodate all kinds of habitats except for those with extreme weather conditions like the deserts and the polar region. Despite some biological and environmental differences, they both play an integral part in the pollination of the various plants. The core areas of difference between the two are as follows:

Although both of these groups have fur covering their bodies, yet they are easily identifiable due to the color of the fur and the shades. The chipmunks have a brownish appearance. Their brown fur has yellow, black and brown stripes that extend the entire body starting from the head to the tail and run all over the body. On the other hand, the two most abundant categories of squirrels are ground squirrels and the tree squirrels, they have stripes only on the back. The fur is usually brown, gray or red in color. In the later type of the squirrels, there are no stripes.

The squirrels look larger than the chipmunk. The size of the squirrel varies from species to species. The gray squirrels measure from 18 to 20 inches with an average weight of 1.5 pounds. Usually, the squirrels are slender. Their eyes are large, and tails are bushy. Chipmunks have comparatively smaller bodies ranging from 7.2 to 8.5 inches in length whereas the range of body weight is 1.1 to 1.8 ounces. The eyes are similar to the squirrels. The tip of the tail is bushy.

The major elements in the diet of the squirrel are acorns, seeds, buds, bark, fungi, pine cones, leaves and nuts. If the aforesaid items are scarce and the stated sources are not available, then some squirrels like to have tiny insects and small vertebrates as their food. The chipmunks eat both the plantation and the small animals. Thus it is appropriate to define them as omnivores.

Sounds are produced by both the squirrels and the chipmunks. The primary purpose of the sound is to alert the other members of the community to any danger. So we can say these vocals are the means of communication. The sounds produced by the chipmunks are more like birds. They cluck and sometimes produce high-pitched sounds for the sake of conversation. The pitch of the sound is different in squirrels. Their sounds are more like duck quack and the whistling sounds.

Chipmunks dig burrows in the ground usually 30 feet deep. The ground squirrels prefer living on the ground. The nesting of the tree squirrels is mostly found on the tree trunks where there are openings. The squirrels can be a real problem in the populated areas as they cause a lot of nuisance by staying in the houses. The chimneys, attics and the bird feeders are their favorite places.

The chipmunks give birth to two litters in one year. Their mating time is generally at the start of the spring season and the final days of the summer. The pregnancy period of a female chipmunk is 31 days. They end up giving birth to 2 to 6 young ones. On the other hand, after a gestation of 35 to 41 days, the squirrels give birth to 2 to 8 babies.

The average life of a chipmunk in the natural habitat is three years, while those in the custody can survive for nine years. The statistics for squirrels show 4 to 9 years life cycle in the wild and 11 to 19 years in detention.

In both the squirrels and the chipmunks, the length of the hind limbs is more than the forelimbs. The primary difference is easily traceable in the number of toes in both creatures. The squirrels have four to five toes of each foot. They have a thumb also. This thumb is not properly developed. There are soft pads under the feet too. It is imperative to mention the claws which are so versatile that they can easily get hold of the trees while they are climbing. In the case of the chipmunks, there are four to five toes. The claws are well developed too. So there is not much difference except the squirrel has more ability to grasping and climbing.

Squirrels have the potential to survive a variety of habitats which includes the tropical rain forests and the semi-desert areas. The only places where they do not exist are the dry deserts and the frozen polar regions. Whereas, chipmunks are the species of the North American region and some parts of the Asian Siberia and ideal habitat for the species are deciduous forests. The living areas of the squirrels vary from species to species. The tree squirrels prefer to live in the hollow parts of the trees made out of the natural phenomenon or due to the woodpeckers tapping habit. If these hollows are nonexistent, they can make their own. Usually, the burrows are either spherical or cup-shaped hollow and are seen in the attics and the nest boxes. The ground squirrels prefer in the burrows dug into the ground. These measure 4 inches in diameter. Some burrows can spread over the length of 5 to 30 feet or even more. The squirrel presence can be identified with the heap of the dirt piled near the burrow. One burrow is meant for a single family. Chipmunks on the other hand dig burrows under the hard structures like rocks, logs shelters and sometimes under the shrubs. Their burrows are well protected and difficult to find out. These are 3.5 m long. There is one burrow for one chipmunk because they prefer living alone.

Squirrels give birth to naked offspring that are devoid of teeth and the eyesight. It is the responsibility of the female squirrel to keep a close eye on the family and take care of them until they are grown ups. The offspring of the chipmunks are also similar to the squirrels as they are born blind, and this state continues until the 31st or the 33rd day of their life.

Squirrels are known for their eyesight. They are also distinguished for the good sense of touch. Their teeth are sharp which are used for gnawing and grinding. The cheek teeth have wide gap referred as a diastema. The teeth of the chipmunks are not much different. The squirrels are known for collecting the food that includes the nuts and the acorns. They keep it safe for the winters proceeding. These creatures do not hibernate in winters. The chipmunks have an interesting feature of cheek pouches that helps them carry the desired food to the burrows and then keep it safe. The chipmunks living in the eastern region and hibernate in the winters, but those in the western part do not. The chipmunks are usually active in the daytime because they are diurnal. The squirrels are nocturnal. There are a number of similarities between the chipmunks and the squirrels in their behavior that makes it difficult to recognize them.

Differences of ways of how to control them

Squirrels and the Chipmunks both can be a real problem for the populations. They are the tiny mischievous rodents that can harm both the natural environment and the public areas. Once they hit the attics and the interiors they can cause great problems. The tree squirrels are tough to control. The control methods of both the chipmunk and the squirrels vary from state to state and country to country keeping in view the level of endangerment.  The usual methods available for the both of them include exclusion, trapping, use of chemicals and shooting. They are silent intruders that look for the openings. Therefore it is essential to block the open passages that give them the way.

Both squirrels and chipmunks are the tiny rodents that can be seen running around in the lawns and the backyards. Distinguishing between them is difficult due to many similar characteristics. As they both belong to the same rodent family, therefore many habits are similar as those of diet and habitat. The fundamental difference between the both is witnessed through the tail. It is the first apparent feature to distinguish between them. The squirrel has a long bushy tail as compared to chipmunks. These are fascinating creatures that have several distinguishing features.

In short both have differences, but still, they are hard to identify from each other. The chipmunks and squirrels make a significant element of the natural habitat. They are an integral part of the pollination making it easy for the seeds and spores to spread.