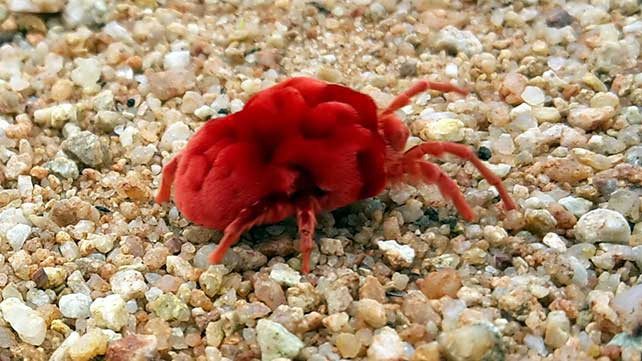 What are the chiggers and where do they lurk

Chiggers are usually small mites that are in the larval stage with hairy bodies. They can be seen in red, orange, pale yellow and bright red color. They are quite small and cannot be seen easily. They are also known as the ‘hosts’ that feeds on humans, snakes, turtles, birds, et cetera. Their size ranges from 1/20 to 1/64 inch long which means that they cannot be seen easily. An infestation usually causes their development.

They lurk near the vegetated, damp, moist, grassy or shady places. However, many say that they can also live in dry environment conditions. They can be mostly seen on the tip of grasses. Animals who eat grass are their most targeted prey. They are countless in number. Their reproduction rate is high, and this species population is more in the moist areas. Their size gives them the advantage to be undetected so they can quickly attack their prey. They also move from one area to the other looking for better habitat conditions.

They have two forms

At this stage, they have six legs and strive for better habitat where they can stimulate growth to convert into the adult form. Humid environment causes the biting of the chiggers because they look for better feeding places. At this stage, when these chiggers encounter any human cloth, skin or any animal they bite them and release their enzyme under the skin where the new larvae grow if precautionary measures are not taken.

The adult form has eight legs and can live in the dry habitat.

What causes chigger bites and how do they bite

Chigger bites are caused because of their feeding nature. They feed upon their hosts. They migrate on the skin of animals and human in search of nourishment. Chiggers usually connect itself to its prey when a human or an animal passes through these places where they are lurking. Folded cuffs, sleeves and collars can give them a way to lurk upon their prey easily. They look for thin skin so that they can easily penetrate through the skin. Numerous people say that they can attach themselves to the skin where they live forever.

However, scientists say that they bite and insert an enzyme that after nourishment transforms into a new larva. The enzymes are the feeding structures that forms a tube-like structure under the skin. The new larvae feed on the tissues under the skin. The bite mark is a round, red pore-like thing that causes much itching. Itching can increase the infection, so it is necessary to take precautionary measures.

The chigger bites are usually tiny. You cannot see them at the time of the bite. After 1-2 hours when the itching starts the bite mark begins to look like a little, red, round pore-like structure. The itching is so intense that after 1-2 hours it causes infection. Even the skin appears swollen and red. The bitten part becomes hard and itchy. Even sometimes it feels like rashes, but itching can cause it to grow because of the penetration of the skin which destroys the tissue for further nourishment to reach the larvae stage.

What are the symptoms of chigger bites?

After the chigger has migrated on its prey and injected its enzyme in the skin, it takes time when the symptoms start to happen which can include:

Note: Itching is the most vital symptom because if itching does not stop it can lead to more tissue destruction and more infection that will provide the enzyme nourishment. The red bumps and itching can take weeks to get healthy depending upon the remedies you are using. Infection can cause more destruction and can lead to other infections of the skin.

Sometimes it is confusion when you get several red pimples on the skin, but it is not necessary to be chiggers. Moreover, it can be eczema or any other skin disease.

What to do if you get bites

If you are aware of these mites, make sure when you walk in your lawn or a park, or you must get to a place where you think they can be, wash your clothes immediately when returning home and take a shower with antiseptic products. It will make you safe from the chigger bites and any other infectious itching.

Are there any health risks of chigger bites?

No, there are no health risks of chigger bites. Chiggers are not a carrier of diseases. They only prey on their hosts for living and reproduction. However, if you are suffering from chigger bites, you will feel intense pain and itching that will last for many days.

However, there are no long-term health issues of their bites. After the treatment, the larvae get removed or get killed by any of the above remedies, your skin starts to get healed up, and your tissues start to grow healthy again. The only thing that a bitten person will have to bear is the itching that can make the person miserable. There are no health issues, but the harsh scratching can lead to bacterial infections and skin destruction. The time will get prolonged if the scratching does not stop.

How to avoid chigger bites

First of all, you must avoid the habitat of these mites. In fact, be more, secure by taking a bath and washing clothes when you come back in home from outside. So, if any chigger has migrated on it will get removed. Use insect repellents and antiseptics if you have a lawn in your house or you have come from a park.

Don’t forget using anti-repellent sprays. The best thing you can use is to apply insect’s repellent lotions on the skin when moving outside. Apply the lotion well especially on the hands, shoulder, feet, legs and neck. That is where the chiggers mostly target to enter the enzymes as the skin of these body parts is thin and easy to penetrate. Avoid sitting on grass especially at night. To control chigger’s insect repellents should be used on the habitat of the chiggers. Use chemical pesticides to prevent their increase in population. Spray your lawns with insect repellent timely to avoid their bites.

Chiggers are usually little mites that can be seen in red, orange, pale yellow and bright red color. They lurk near the vegetated, damp, moist, grassy or shady places. They have two forms and their bites cause severe infctions. They look for thin skin so that they can easily penetrate through the skin. Itching is the most important symptom of bitten by these mites. The red bumps and itching can take weeks to get healthy depending upon which remedies you are using. Various natural and chemical repellents are available in the market to avoid these creatures and treat the infections caused by them.