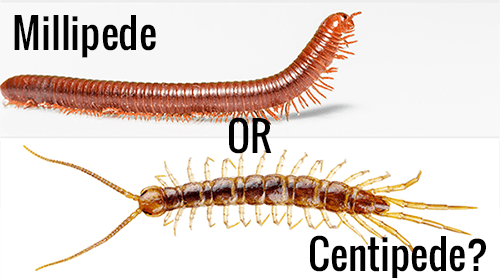 https://www.youtube.com/watch?v=B66Rbf3WMYc
Centipedes can range in size from 6 to 8 inches, the millipedes range in size is from 4 to 5 inches. They both are elongated and segmented with many pairs of legs. They consist of toxic compounds, and they are severely harmful if these chemical compounds encounter with human skin. Centipedes and millipedes both can be found in bright and dark colors like green, yellow, red, blue, orange, and much more. According to scientists these bright color insects are a warning to people.

Centipedes and millipedes have things in common

7 Differences between centipedes and millipedes

The classification of millipedes and centipedes are same because they both are the part of phylum arthropods. Although all the insects are part of the same phylum, still they differ in many characteristics. Centipedes and millipedes also differ in their classification. For instance, their bodies have many segments with many pairs of legs. In other insects, there any only few parts with 3 to 4 pair of legs.

2. Differences in anatomy and appearance

They both have different defensive strategies:

They possess toxic compounds that they use as their defense mechanism. They consist of different compounds, and these compounds can cause chemical burns. They are highly active at the time of the attack and can easily win from other insects who do not pay attention or know their unique possesses of toxic compounds. These toxic compounds can be very harmful if they get in touch with humans. They can cause burns and severe allergic reactions.

Sometimes when they both encounters with the human body or they pass from any human part, it can cause severe allergy, and your skin can start to get red and bumpy. The solution to these severe reactions is taking a bath with cold water and using antiseptic soaps that can prevent the further reaction of the body. Also, use antiseptic lotions to prevent any further allergic side effects on the body.

The centipedes can move faster than the millipedes because of its longer legs. They can quickly bite their prey because of their rapid movement. The millipedes are, however, slow walkers and they cannot catch their prey so fast. That’s why they can live on wood and plants. The centipedes can comfortably achieve long distances, but the millipedes do not prefer to move long distances. In the rainy season, they walk the most to save themselves from the water or to get drowned.

Centipedes and millipedes both produce through sexual reproduction. In centipedes, the male left their sperm bundles near the females so that they can easily impregnate themselves or infuse the sperms inside to produce new offspring. However, in millipedes, the male and female both join for mating. They start mating at the age of two, and they mate during the whole year. They mate the most when they find the suitable environment for their new offspring. Sometimes, the male millipedes give massages o the females to make their interest in mating. Both centipedes and millipedes lay their eggs in the soil where the eggs are kept for months. They lay their egg with their feces to protect them. They prefer laying eggs in the soil so that the new offspring cannot face any environmental hazards. The soil provides them with food and moisture. The new insects live on small insects for food.

6. Differences in diet and foraging

They both differ when we talk about diet and feeding. Centipedes can search in long distances for food and shelter because of their fast mobility. They are highly carnivorous and looks for their prey. They kill their prey by biting them. Their bite injects highly toxic compounds that kill their prey. They also have a pair of legs that they use to attack their prey which consists of venoms that they through on the prey.

Millipedes can live either on small insects, plants, and woods. They are slow in mobility, and they do not prefer long distances searching for food and shelter. That’s why they seek refuges in homes when there is a high rainfall. They enter homes and eats wood. They can live for several months in a place if not disturbed. They can also live in soil where they get their food from small ants and insects that they can quickly catch. Their food source also plants, and they get nourishment from roots, stem, leaves, fruits and seeds. They are mainly detritivores.

Centipedes are the kind of insects that can die without moist environment. They prefer to live in moist soil and can also live in damp areas. Millipedes are however capable of living in every situation. If they face non-ecofriendly situations, they can change their habitat. They move into the houses and live in the basements or under the furniture or anywhere where they can easily hide them. In forests, the centipedes also live near dark places mostly under the rock, and that’s how their fossils were found because they love to live under rocks. Some of the millipede’s species can live under the deep water but some of them cannot. They can live for months under soil and water. They are also present in the cracks of the walls from where they make their way into the houses. They both share soil and damp areas as the same habitat. And they can live for months inside the soil living on other insects like spiders, ladybugs, ants and small cockroaches.

Other surprising facts about centipedes and millipedes