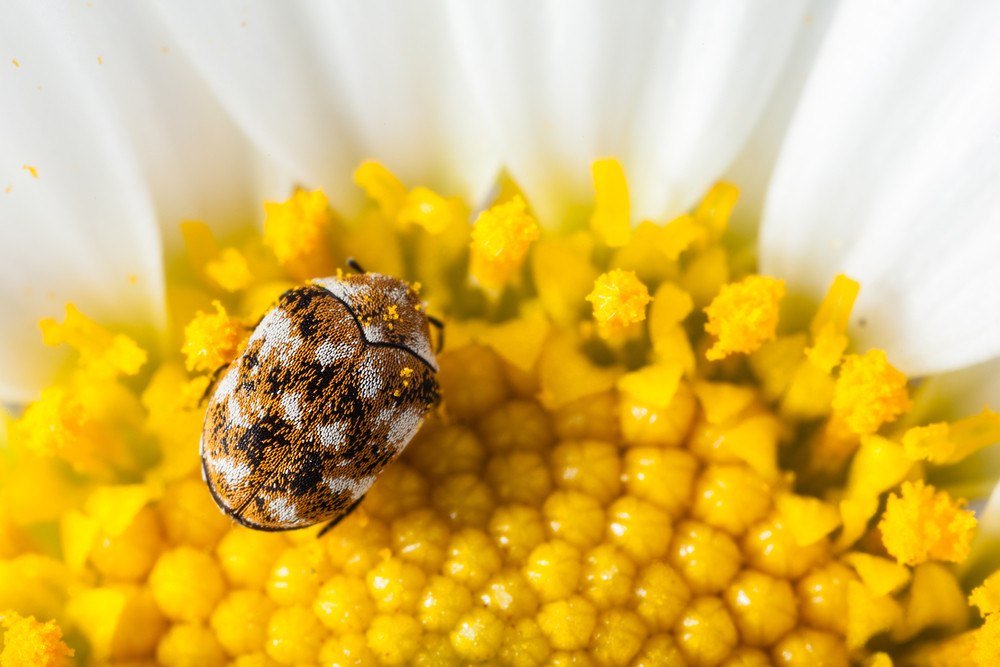 Carpet beetles are the types of insects commonly found in our home all over the world especially in Europe.There are a variety of species of carpet beetles among which Varied carpet beetle is the most common type.

The most common types of are fur beetle and varied carpet beetle. Both are found in Europe. The length of adult beetles is around 1\8 inches. Their bodies are oval in shape and larvae have typical length.Adults are brown in color with scales of different patterns. Carpet beetles are dark brown or black in color. They range in sizes from 4-5 millimeters.Fur bottles have a white spot on their wings with black color.Varied carpet beetles are mottled with brown, black and white scales.

Read moreCarpet Beetles: Interesting Facts & How to Get Rid of Them

Beetles are insects that belong to the order Coleoptera. They are identified by their front wings that have hard cases. This characteristic distinguishes them from other insects. The Coleopteran order has over 400,000 species of beetles which makes it the largest order in the animal kingdom. This order comprises of 25% of all animal life forms known to man as well as 40% of the known insects. The largest family ‘weevil’ also belongs to this order with over 70,000 species falling into it. These insects are found everywhere except the cold Polar Regions or areas around the sea. Tropical click beetles are found in the tropical regions. Insects mostly feed on fungi and plants. They also come in handy to break down the debris from plants and animals, and they also eat different invertebrates as well. Some of the beetle species work like agricultural pests, and others eat scale insects, aphids, thrips and various other plant-sucking insects that are known to damage the crops. Over 300 species of beetles’ larvae are also used as foods. The larvae species that are consumed mostly are rhinoceros beetles and mealworms. Beetles have a major impact on the lives of humans because of the horticultural, forestry and agricultural uses. Some of the species of beetles including mountain pine beetle, Colorado potato beetles, and coconut hispine beetles are serious pests, but they don’t cause much damage. Dung beetles and lady beetles also have benefits and are fruitful in controlling insect pests. Merchant grain beetle feeds on biscuits, fruits, and nuts within the households. Khapra beetle feeds on wood and is found in cabinets in the households.