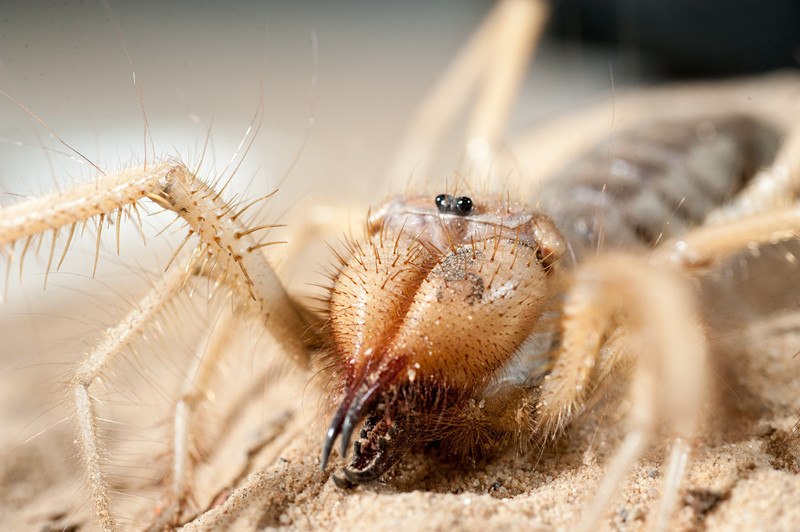 Camel spiders are huge. While the name “camel spider” doesn’t sound too bad, this spider’s real name is the Egyptian Giant Solpugid. I love this spider because it’s home to many myths and rumors, but a lot of these tall tales are false.

Many myths of the giant camel spider come from the Iraq War.

Basic Information About the Camel Spider

Camel spiders are not real spiders. This is very confusing because the camel spider is part of the Arachnida class, but they’re really solpugids. In fact, these spiders are in the order of solifugae while also being in the class of Arachnida.

These spiders are a part of an order that includes:

You’ll find that these “spiders” are also called:

What’s a new fact that I didn’t know for a very long time is that not all arachnids are spiders. But the camel spider isn’t a scorpion either. This is a solifugae, and we’ll see how they’re different and how to identify them by their appearance and habits. 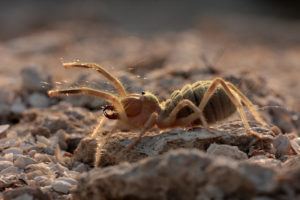 If you ever come across this spider, you’ll do a double take because it looks like they have 10 legs. But they really have eight legs. The additional appendages aren’t legs at all. These appendages are actually sensory organs that look a lot like legs but are called pedipalps.

This spider has a:

Horrifying at first sight, you’ll also find that the jaws of the camel spider account for as much as 2 inches of their entire body. The jaw is called the chelicerae and they’re used to catch the spider’s prey.

The spider has a 10-segmented body and the entire spider’s length is 6 inches including the legs.

Large central eyes are present, and these spiders can recognize forms and have a hairy body to accompany their elongated jaws.

The color of this spider is:

The good news is that this spider enjoys desert environments, so you’re only going to find them roaming free in the desert and in dry conditions. Camel spiders enjoy the hot desert sun – something humans tend to avoid.

Wrongly called the world’s biggest spider by foreigners, this spider is different than the normal venomous spider that you’re expecting to come across. Camel spiders live in mostly desert habitats, and you’ll find them in:

Nocturnal, these spiders are most common during the night and will flee when the sun is shining.

The “jaws” of this spider are big for a reason. While many spiders have venom to kill their prey, the camel spider will grind their prey using their large jaws. The powerful jaws will saw and chop the prey into little pieces, but the rest of the process involves digestive enzymes.

The digestive enzymes of the spider will liquify the flesh of the victim, allowing the camel spider to easily remove and eat the remains of its prey.

But you’ll be happy to know that despite all of the camel spider myths, these spiders don’t feast on human flesh – although they will bite if provoked. 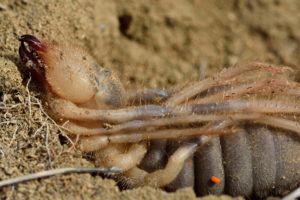 The female spider will lay 50 – 200 eggs at one time, and she will bury these eggs into a burrow.

There’s no telling how many eggs a female will lay at once, and the number will vary each time she lays her eggs. The female spider will often fatten herself up before laying her eggs because she will guard her eggs until they hatch.

When this occurs, the female may go weeks without eating.

Females that don’t eat enough and prepare for the severe fasting period that follows will often die.

These spiders will go through several nymphal instars before they turn into adults.

Small-to-large in size, the behavior of these spiders is rather common in the arachnid world. The spiders will avoid humans as best they can, and they will only come out at night if they have the option.

Nocturnal behavior allows the camel spider to be a deadly, nighttime hunter that pulverizes its prey with its massive jaws.

Contrary to popular belief, the camel spider is not venomous. While some spiders use venom to help slow and kill their prey, the camel spider relies on its massive jaws to get the job done. Evolution has allowed this spider to be a fierce predator, and the digestive enzymes of this spider allow it to break down its victims so that it has an easier time with digestion.

But you will still want to seek medical attention if bitten by these spiders.

The bites from a camel spider will make most people screech in horror – they look horrifying. You’ll also need some form of antibiotic or cleaning of the wound to fend off any potential infection that may occur.

The Chelicerae will be able to break through human skin, and the bites are said to be very painful.

You’ll definitely know if one of these spiders has chosen to bite you.

The good news is that the camel spider will not bite unless provoked in most cases. This isn’t to say that they don’t bite – they do – but they will only bite when necessary. There’s also a chance that a female will be guarding her eggs, in which case she will be more aggressive and likely to attack.

Since these bites are rather severe in nature, always make sure that you visit the emergency room or a physician as soon as possible. While the bites are not deadly by themselves, this doesn’t mean that they won’t cause a lot of pain, discomfort or other side effects.

Infection may also set in, which can be serious.

Why? The Iraq war led to a lot of myths from soldiers and personnel who were fighting in the region. Maybe it was a joke at first or maybe these soldiers were horrified by the size of these spiders, but these myths started to become more prevalent, leading to a gross miscalculation of the truth.

And the Internet helped spread these myths even further, causing the camel spider to take on an entirely new identity.

While there are some truths behind every myth, the Internet has sensationalized the camel spider and made it larger than life. This spider is not your run-of-the-mill house spider, and if you see it, you’ll definitely recognize that its large size is nothing to be trifled with.

I wouldn’t recommend staying near one of these spiders for long, but if you do see one or even get bitten by one, death isn’t imminent.

Camel spider prevention is only an issue if you live in a very hot climate or in the dessert. The problem is that these resilient spiders are not going to go down without a fight. In fact, these spiders will often attack because you’re trying to harm them.

The general rule of thumb to stop any spider in your home is:

A common misconception is that the spider spray that you find in the store will work on the camel spider. I am sorry to say that if you spray this spider with chemicals or some form of an insecticide, there’s a good chance that the spider will choose to attack you.

Sprays don’t work to kill the spider in most cases, but the spray will make the spider very agitated and it may attack you as a result.

So, if you see one of these spiders, it’s best to leave it alone and try to lure it outside of the home if it’s inside. I recommend not confronting this spider because their bites are very painful.

Rather, you’ll want to open windows or doors that the spider is near so that they choose to leave the space. If it’s dark outside, try opening the door and putting some form of light outside to attract the spider.

If you’re brave and have an umbrella, you can cast a shadow that the spider will chase after. This is a smart tactic and one that is also a little scary since the spider will be following after you. The key is to lure the spider to a shaded spot and then try to move yourself back into the home.