The name ‘bullet ant’ is given to this ant due to their intense bite. The pain is unbearable and is said to be the pain of a bullet by getting shot. The person feels this pain for 24 hours, and its body shakes for a week because of the venom. Their habitat is trees, shrubs and mainly the tree trunks where they are found in large populations searching for food. Their large population is a danger for those who do not know what this thing can cause.

The ants feed on small arthropods found around their habitat. They even search for food traveling long distances and bringing food back to their home to eat together.

The ants contain a highly toxic compound that they use for paralyzing their preys and people who try to harm them. Their venom is so strong that it can kill people with less immune powers. Their defensive powers are incredible, and they can easily paralyze anyone to save them. They do not require large populations to make a man down; only a few insects can easily get a man down by their single bites.

In Amazon, there is a ritual where boys need to pass a ritual of 20 rounds where they must wear a glove full of bullet ants that cause multiple bites and make the body shake for days with high pain. Tere is a species of flies that uses the ants’ dead bodies for their reproduction process. The female flies to found the bullet ants that are usually dead and decomposing. The flies lay their eggs and one bullet ant dead body can nourish up to 20 eggs. The eggs hatch in the body and they fly away from there.

Many scientists have tried to find out the world’s most painful bite for protecting people and providing them with the knowledge to stay away from these kinds of insects. The pain scale is of 1 to 5 of painful bites of insects, and it is said that the bullet ant bites have a scale of 4. That means this is one of the most dangerous bites that people should stay away from. Their multiple bites can even paralyze or kill you in hours, and there would be nothing to stop spreading the venom if you encounter multiple bullet ants. There is also another wasp-like insect that is also known for its painful bite, and the scientists are experimenting with it to find out that is it true that these wasps bite more painfully than these bullet ants whose bites cause a bullet shot like pain that can make you feel half dead. 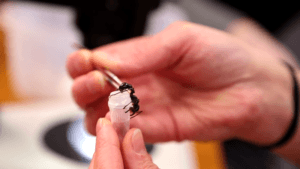 There are so many stings, but the sting of bullet ants has been expected to be the worst. A person with low immune deficiency cannot bear the pain of the bite. So, it depends on people to people that who can handle this painful sting. Scientists have predicted a worst painful bite of a wasp, but the research is still in progress.

The bullet ant can cause penetration in the area where they sting and let the cell membrane burst by entering their venom that will cause unbearable pain and irritation.

Note: don’t touch the bitten part as it can increase the flow of venom in the body.

The bitten part is a place where many bacteria, viruses, and small insects would be attracted to enter because of no cell membrane protection. This can cause the destruction of the immune system of the body. It also affects the nerve cells badly that can cause a problem in the sending and receiving of messages from the body to mind and mind to body. However, it is highly recommended that stay away from this bit, for your protection.

There are some ways by which you can extract the venom from the affected area:

It is recommended to apply cold things on the spot. Even, take a bath in ice cubes that will compress your body and affected part to extract the venom from the body. 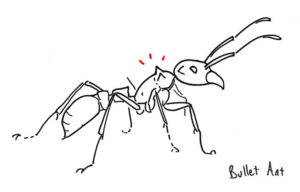 It is recommended to take a high dose of antihistamine to prevent the flow of venom in the body and allergic reactions in case of multiple bites.

It is recommended that in a case of high pain visit your doctor immediately for preventing further pain and infections. Take medications according to the prescription of the doctor.

There is an astonishing ritual that takes place in the deep forests of Amazon. In our modern countries, we do not need to prove to be a man. The tribes of Amazon have a scary ritual to become a warrior that starts at the age of 12, and it is for males. This ritual consists of boys and men who practice sacrificing and taking pain only to be a warrior. The tribe chief has a tradition that no man can become a warrior if he does not understand the true terms of scarification and pain. 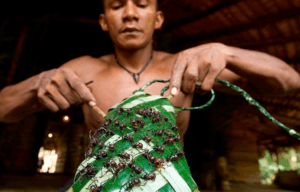 For this, their ritual is to put their hands in a glove that is full of bullet ants and put their hands for 5 to 10 minutes. There are total 20 rounds to achieve the name of a warrior.

They are made by combining leaves to form a large glove where man and boys enter their hands and arms. The bullet ants are collected by the boys who turns 12, and these ants are provided with anesthesia or anything that makes them unconsciousness for hours, and after some time they are put on the glove, and when they achieve their consciousness, the man enters his hands into the glove.

The brutal ant ritual is a painful process that one needs to achieve to get its respect and walk like a man among his tribe. The importance of this ritual is so much in many forests, especially in the deep dark forests where the tribe leader’s orders to perform them.

The Significance of the Bullet Ant Ritual

The significance of this ritual among the tribe is to be a warrior. According to them, a man is not a man if he cannot sacrifice and control pain and its fear.

The tribes of Amazon have a scary ritual to become a warrior that starts at the age of 12, and it is for males. This ritual consists of boys and men who practice sacrificing and taking pain only to be a warrior. For this, their ritual is to put their hands in a glove that is full of bullet ants and put their hands for 5 to 10 minutes. There are total 20 rounds to achieve the name of a warrior. Many people die due to this ritual practice because of the multiple bites and the shooting pains that can make the person unconscious for hours.

There are many videos that you can easily find on YouTube especially on the channels of wildlife, where people goes in the deep forests only to search creatures like this that can cause paralyzing and multiple shooting pains and even in the worst cases, death. You can find videos that provide the information that how the bullet insects sting and why they are named as bullet ants for their shoot like pain. In some videos, you will be able to see that people put bullet ants on their hands and experience their bites. The bite causes unbearable pain that can make people scream like crazy, and some of them even get unconscious for some minutes. They take medical treatments with them to extract the venom at that time. You can even see these videos to get information that if you are traveling in a forest and get stung by s bullet ant what should you do. These videos are very informative for those who wants to know more about these ants in real life.

Apply charcoal on the body when traveling in the forests to confuse bullet ants. This is what the Amazon tribes apply on their hands before putting the bullet ant gloves.

Bullet ants are between 0.7 inches and 1.2 inches in length. These ants are reddish-black in color, and they have very large pincers. The pincer is what bites you, but they also have a visible stinger.

Bullet ants, unlike other forms of ants, have a queen that is only slightly bigger than her workers.

The queen may not need to be any larger than she already is because the bullet ant is among the world’s largest ant species. In total, the length of these ants can span to 30mm.

Where do bullet ants live?

The good news is that these ants aren’t common outside of a few areas:

If you visit a tropical rainforest, this is your greatest opportunity to find a bullet ant. The size of their colonies is just a few hundred ants, but with painful bites that can send a human to the hospital, they don’t need to live in big colonies like other ants.

The nests of these ants can be found at the base of trees where they forage for food.

Bullet ants will seek out nectar, sap and other small insects as food. These ants will eat flies, worms, crickets and even termites.Nectar is carried in the ant’s mandibles, and it will be brought back to the colony to share.

The role within the colony will dictate the size and appearance of the ant.

In most cases, the higher up in the colony an ant is, the larger they will be. This is why queen ants are always a tad bit larger than other ants in ant colony.

Are bullet ants aggressive to other ants?

Yes. In fact, bullet ant workers will become injured because different colonies will fight against each other. What’s interesting is that these fights actually lead to a predator of the bullet ant being born.

When workers are injured, they will start producing a scent that attracts the phorid fly.

The fly will know that the worker is injured and begin to feed on the ant’s wound. The fly will also lay its eggs in the wound. And up to 20 fly larvae may be placed inside of these injured ants.

The main predators of the bullet ant is insectivores and other bullet ants.

Attacks from other insects are common, and this is why there are “soldier” ants that will stand outside of the colony and guard it from intruders. The main goal of these ants is to protect the queen so that the colony can continue producing young.

How long do bullet ants live?

Bullet ants have a short lifespan with the average worker ant living for just 90 days. The exact lifespan of the queen is unknown, but the typical lifespan is a few years. Bullet ants have a very interesting lifecycle that will occur in four major stages that spans between 6 and 12 weeks.

During this time, the ant will go from egg to larva to pupa and adult.