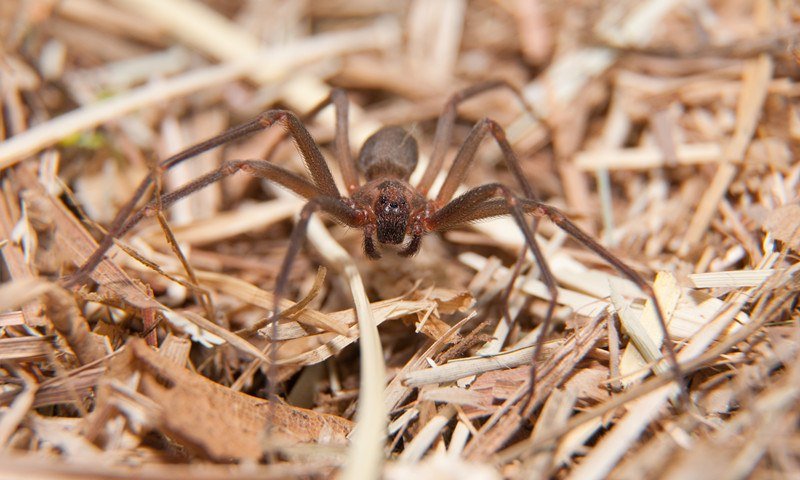 Brown recluse spiders are a potential danger to humans, especially people who have a weakened immune system, are elderly or are children. Rumors suggest that the brown recluse has now made its way into California, but is it true?

We’re going to debunk the rumors and learn a lot more about the characteristics, habits and facts behind the brown recluse. 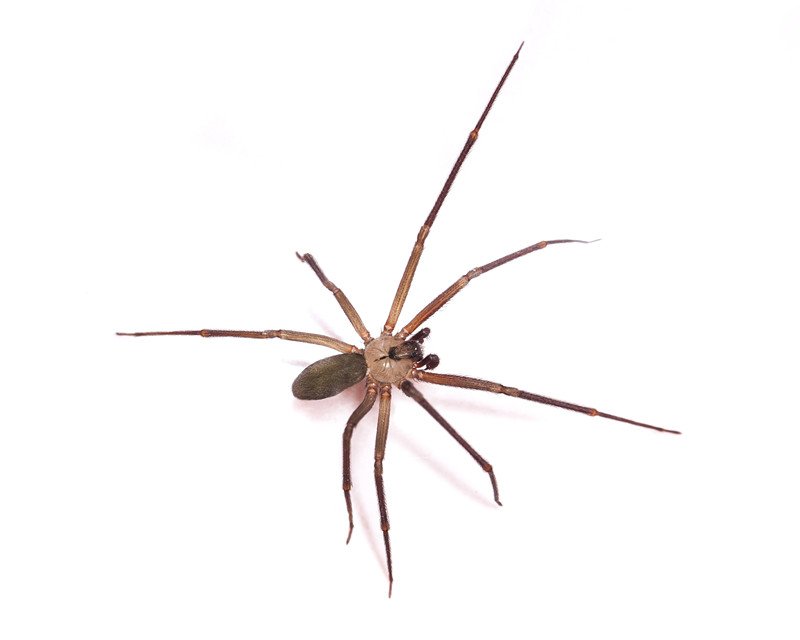 Coloring is only a small part of what makes up this spider’s body. The abdomen is clear of any spots or strips, and when they reach adulthood, brown recluse spiders can have a 6 mm to 11 mm body length.

While pictures make these spiders look huge, they’re often no larger than a quarter. With that said, they also have fine short hairs.

Why?  Well, if you have the chance to see the dorsum of this spider, you’ll notice it has a violin-like pattern. This pattern is the easiest way to distinguish a brown recluse spider from another spider, but you’ll also need to pay attention to another characteristic:

Eye patterns for these creepy crawlers is essential when trying to identify them. The brown recluse spider has six eyes arranged in pairs. This is different from most spiders, which have eight eyes.

You won’t find many brown recluse spiders running into the light and trying to be seen. The brown recluse thrives in dark, sheltered areas. Shelter is a key important thing for any spider, and that’s why you’ll find them in:

When you see a brown recluse, you’ll often notice that they’re disorganized by nature and have a tendency to build their webs near ground level. This spider’s web isn’t meant to catch food, so they don’t need to spin their webs in strategic locations.

This spider will roam around to hunt their prey before going in for the kill.

What’s seen as an aggressive house spider is really a timid and shy brown recluse. If the brown recluse bites, it is often the fault of the human. These spiders don’t want to be near people, and they’re so shy that they won’t bite unless provoked.

But there are people that do get bitten.

We’ll be talking a lot more about brown recluse spider bites soon, but before we do that, let’s see how these neat little spiders reproduce and what their average life cycle consists of in nature.

Brown recluse spiders are like any other spider in that they have their own mating season and rituals. Female brown recluses will be the center of attention, and males will do their best to court their counterpart in hopes that she will mate with him.

Warm, spring weather is the time when spiders often mate.

If you see a brown recluse in the wild, there’s a good chance that you’re out between the months of March and October when the brown recluse spider is most active.

Once the mating process has commenced, females will:

The eggs will hatch rather quickly, with most eggs hatching in as little as one month. You’ll find that the baby brown recluse will go through a molting process that will continue to take place over a period of 1 – 2 years, depending on when they’re born during the species’ yearly cycle.

Adulthood will normally occur for the brown recluse in 6 – 12 months on average.

But these spiders don’t have a long lifespan. The species will live for 2 – 3 years on average, according to Science Daily. This leaves very little room for an adult to produce a large amount of eggs.

Females will often produce 2 – 5 egg casings, with each casing having up to 50 spiderlings inside.

The molt of the brown recluse will cause the spider to grow larger in size with each passing molt.

Brown recluse spiders like the dark, but when they’re in your home, they like to find their way into everything, from sheds, closets and basements and even into cardboard boxes where they like to hide away.

Females have a tendency to stay closer to their webs than males when they need to go out and hunt.

Distribution of these spiders are:

Contrary to popular belief, the brown recluse spider bite is not always deadly. I’m not stating that it doesn’t have a deadly hemotoxic venom, but it doesn’t always result in severe complications. In fact, these bites often go unnoticed and never materialize into a major problem for the person attacked.

Most bites do not cause necrosis, and while the venom can be deadly, it often isn’t deadly. In fact, you’ll be happy to know that:

There are cases where a person suffered from severe dermonectoric lesions, and in the event that this does occur, you’ll want to seek medical treatment.

When a bite occurs, it doesn’t always present symptoms quickly or at all, but when it does, these symptoms and signs can be:

Rarely aggressive, the only sign of being bitten might be a strange skin bump. The bump may form into a small white blister, and if this occurs, there’s a chance that an ulcer has formed. Necrosis is very serious, and when this happens, ulcers destroy the soft tissue in the body and can take several months to heal.

Local pain and symptoms will worsen for the first 36 hours after an attack.

Necrosis will continue to expand, with the potential of growing to 10 inches in size. You’ll need to seek medical attention if the tissue is damaged, or you may suffer from gangrene.

Systemic symptoms and necrosis do not occur in nearly half of all bite victims, and if the venom is injected, it will spread through the body in minutes. The most susceptible group of people that can suffer severe injuries and complications are:

Anyone with a weak immune system may also suffer from serious side effects when bitten.

If systemic symptoms do occur, these symptoms will include:

Deaths from a brown recluse bite are very rare, and most people will not suffer any symptoms from their bites.

If you want to do your best to avoid being bitten by a spider, the best form of protection is avoidance. The key most important thing is that the spider doesn’t feel threatened and you don’t corner it.

Following these two tips will reduce your risk of a brown recluse spider bite.

If you’ve been bitten by a brown recluse, your best bet is to go to the doctor immediately. If you choose to wait and see if symptoms occur, you’ll want to:

You’ll find that a spider bite is a lot like a cut – it needs to be cleaned and covered. First-aid ointments, such as Neosporin, can help along with any materials that may disinfect and clean the wound.

Treatment may be needed from a professional if:

Of course, if necrosis begins to set in, you’ll want to immediately go to the emergency room and seek professional treatment.

In most cases, brown recluse spiders aren’t known for being especially dangerous or deadly. 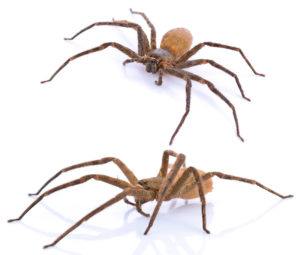 Brown recluse spiders are very interesting, and when you begin to learn more about these spiders, you’ll find that you have a much greater sense of appreciation for the species. The facts that you may not know about the brown recluse are:

How to Get Rid of Brown Recluse Spiders

Sadly, there’s not much you can do to get rid of these brown, violin-marked spiders. While they may seem a bit scary, they often don’t overrun a home unless they decide to lay their eggs in your space.

It’s not fun to find dozens of little brown recluse spiders running amuck in your home.

And if you have a crawl space, you’ll find that a lot of these spiders will seemingly fall on you, leading to severe bites.

Some people will need to have the wound cut out so that the skin stops deteriorating – not a good thing.

If you want to get rid of a brown recluse spider, you’ll need to:

When an infestation does get out of control, a call to an exterminator is all you need to correct the problem. Professionals will take the appropriate safety measures to kill the brown recluse spiders in a way that poses no harm to you or your family.