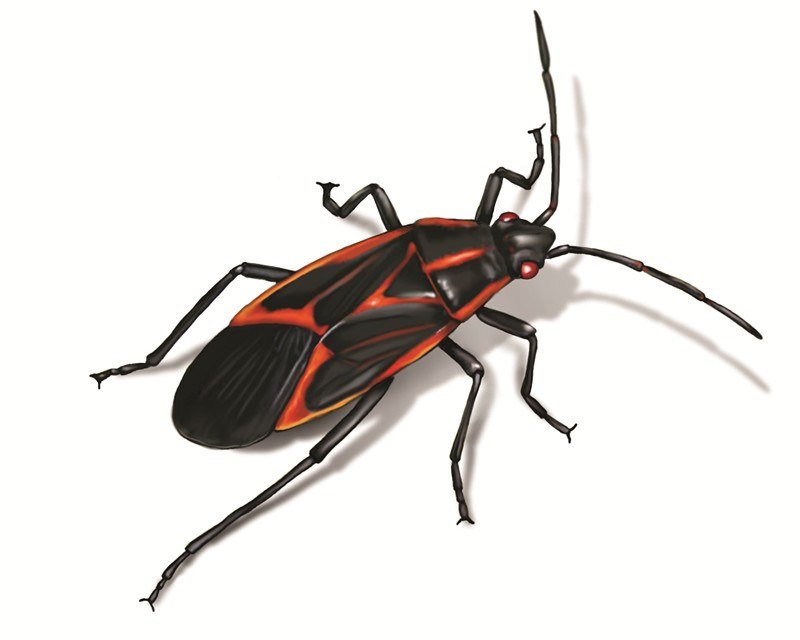 Boxelder bugs are present in North America and across the eastern United States. These insects known with their Latin name Boisea Trivittata are different from another species. Boisea Rubrolineata which are also called westbound bugs. As the name suggests, it is mostly present on boxelder trees. Some of these bugs live on ash and maple trees. These bugs are also known as ‘Democrat bugs’ because they swarm or congregate during the month of October, the time for people vote. They are considered to be irritating because of the secretions and the tendency to stain the furniture, walls, and curtains. Due to these secretions, they also gather inconspicuous aggregations without any predatory issues.

They are known to invade houses and human-made structures, but they never reproduce indoor. These structures are ideally suited to winter hibernation location for these insects. They are not considered to be agricultural pests because they are not known to do any significant damage to the trees or crops. However, they are deemed to be nuisance pests because these annoying boxelder bugs stain everything they find with their secretions. These tiny creatures release a very disgusting compound to keep their predators away. For this reason, they gather in such huge swarms before they get into their hibernation mode.

Adult boxelder bugs can reach up to a length of 0.49 inches or 12.5 millimeters. They have fine reddish lines on the back around the abdomen area. The boxelder bug nymphs have bright markings like red wing veins with black or dark brown background color. The eggs laid by boxelder bugs are straw yellow in color, and as an embryo develops within, they turn red. Their nymphs of the first instar are 1.33 millimeter in length and are wingless. They are bright red abdomens while their antennae and legs are black. The bright red color becomes darker as the nymphs get to maturity. There are three long stripes marked on the thorax while the margins of the wings are or red-orange color. The abdomen of an adult boxelder bug is reddish orange as well.

Boxelder bugs are usually found in tropical or terrestrial regions as these are their most suited living areas, wherever they find box elder trees. These bugs specifically feed on the seeds that belong to Acer species and prefer to be around the seed-bearing boxelder trees. It is at times confused with Jadera which is fund in the western regions. Boxelder bugs belong to Rhophalidae family which is different from Pentatomidae species because the latter one is more popularly known as stink bugs. They prefer sucking juices from the boxelder trees.

At times the boxelder bugs do release a pungent smelling compound to get rid of its predators. They specifically emphasize on Acer seeds while feeding; they have the tendency to destroy plant tissue as well. Nevertheless, there has been no behavioral display as agricultural pests because of the petite damage that has been registered. They are annoying due to their pungent smelling compound or when they are gathered in the form of a swarm. Due to these habits, they are considered to be nuisance pests. As they feed in huge numbers, they can cause severely infested foliage, and it is clearly observable.

These bugs breed on a seasonal basis. They look for a mate after seeking food for about a couple of weeks when they have come out of their hibernation. These bugs use their antennae to find the right partner for mating. These antennae serve to be their primary sensory organs. The bug releases a compound from its abdomens. It attracts the females for mating. In the case of boxelder bugs, males are smaller than females. Their females usually carry them during mating where they have their bodies in contact from the rear side.

As the fall season comes, these bugs gather in huge numbers on that location which are exposed to the sun. During this time they are looking for a well-protected site where they can spend the winters in hibernation. They will look for any crevices and cracks, and eventually, they find their way into the houses and buildings. After hibernation, they come out when the buds of boxelder trees begin to open. They will spend the remaining part of the year fully active while feeding on the seeds till the winter season comes again. The females use crevices in the tree barks to lay their eggs certain times of the year, and when the nymphs hatch from the eggs in a couple of weeks’ time, they began to feed on the plant tissue of their host trees. They have many instars of their gradual metamorphosis. One or two generations can be produced which entirely depends on the weather conditions.

4. Signs of a Boxelder Bug Infestation

The biggest sign comes when they gather in huge swarms right in the sun before the winter season starts. They are preparing themselves for hibernation. For many people; the most annoying thing is when they see huge swarms of bugs invading their homes and gardens. These annoying boxelder bugs enter the homes as they prefer the warmth of the households during winters. Boxelder bugs are one of the insects that hibernate during winters come out in large numbers when the temperatures begin to rise. The numerous bugs prefer to congregate on the sunny side of any tree bark or building. It is this time when people began to realize the boxelder infestation. During the winters they tend to hide in the well-protected areas. These areas include the crevices and cracks of the buildings and the barks of the trees. When the temperatures begin to rise, they start to come out and look for food. During the fall season, they gather around and look for areas where they can hide for the chills. It is usually the time when people realize that there is boxelder bug infestation.

Spring and fall boxelder bug control means that these bugs must be controlled in this two season in particular. Boxelder bugs population can be controlled by getting rid of the boxelder trees or plants related to the Acer family. The main issue comes when they are in search of their winter shelter. They turn to the trees, rocks or building and homes to remain warm and stay safe from the cold temperatures. During the cold weather they stay inactive within the walls, and when the heating system are turned on, they think that its spring time and start to search food and mate to copulate. During the spring time, they come out of their hibernation and begin feeding while females lay their eggs. This behavior can continue well into the summer as well depending on the temperatures.

When these bugs will not find their food source and shelf they will not invade into your house. It is best to seal off any cracks within the walls, doors or windows. Because they are highly specialized insects and feed on Acer seeds only, therefore, they will come to the place where they can find these trees. If these trees are removed, they will not even come through here. You have to do some repairs or make some replacements of your broken door screens and windows as well as in the roof, kitchen, and bathroom. You must seal off the areas where different sort of cables and wires enter your house using the caulk. For larger spaces, you can also use spray foam which is expandable or copper mesh. Use rubber seal all along the bottom of the garage doors as well.

For the homes that are made of plaster, stucco, brick veneer or stone, you need to check the external surfaces for any spaces or cracks. These spaces and cracks allow easy entry for the bugs, and they need to be sealed. Seal any cracks around the doors along with the spaces, roof lines, windows, especially corners and the areas where horizontal surfaces meet the vertical sides. Any gaps or crevices must also be found, and they must be filled with different sort of sealants such acrylic, silicone or elastomeric latex. While for the brick veneer or stone, there will be weeping holes at the bottom of the holes, and they need to be sealed.

Unluckily, there are too many gaps within the vinyl siding, and they serve to be the ideal places for the bugs to invade. Emphasize in the area where they have invaded in the past. A large number of boxelder bug congregation occurs around the doors and other openings as they serve to be the ideal place for entry during fall. However, it is recommended that the treatment should be conducted similarly to the other houses as mentioned in this article above and make sure that all sorts of entry points are filled with sealants.

Boxelder bugs are not equipped with any venom thus, not able to sting. Nevertheless, there have been some reports of the boxelder bug bites, but they do so to defend themselves when they are pressed. These bites have not been registered to cause any long lasting health-related concern apart for slight irritations. According to science, they use their sharp mouthparts to eat seeds or fruits only not to feed on human beings. The only annoying thing about these bugs is there smelly-pungent secretion which they use to defend themselves from the predators. This secretion has the tendency to stain the walls and furniture within the houses. Besides that, there is no issue associated with these bugs. Boxelder bugs only bite when they are pressured with bear skin, and to retaliate they use their mouthparts to stay away. There are no issues that these bug bites have caused to humans. Boxelder bugs are herbivorous creatures, and they do not feed on the flesh of any sort. Therefore, there is no biting threat that people face from these true bugs. However, prepare for a very nasty smelling experience when you tease these little buggers.

For the purpose of prevention of boxelder bugs invading the house and buildings, make sure that you have effective indoor and outdoor control. Repair any kinds of cracks in the ceilings or walls and holes in the windows or the door screens. The sealants must be used of high quality and must contain silicone or silicone-latex. You can also use door sweeps for all types of entryways to your home. Using rubber along the bottom of the garage door is ideal in this case as well. Using certain exclusion methods mentioned above do work well even though they all are labor intensive. Keep in mind that in an attempt to get rid of these bugs from your homes, don’t use any insecticides within the walls.

The dead bodies of these bugs will attract other insects for feeding. Instead of an insecticide, you can use a vacuum to get rid of these bugs and dispose of them safely. Nevertheless, the use of chemicals is not recommended if you have children at your home. Therefore, keep the utilization of these chemicals as minimal as possible. If in case you are experiencing boxelder bug infestation to a larger extent then you need to get in touch with a professional pest control service to sort out the problem for you. Another solution to keep the boxelder infestation is to spray a registered formula of insecticide for the purpose of non-edible ornamental trees especially during the time when the nymphs are feeding.