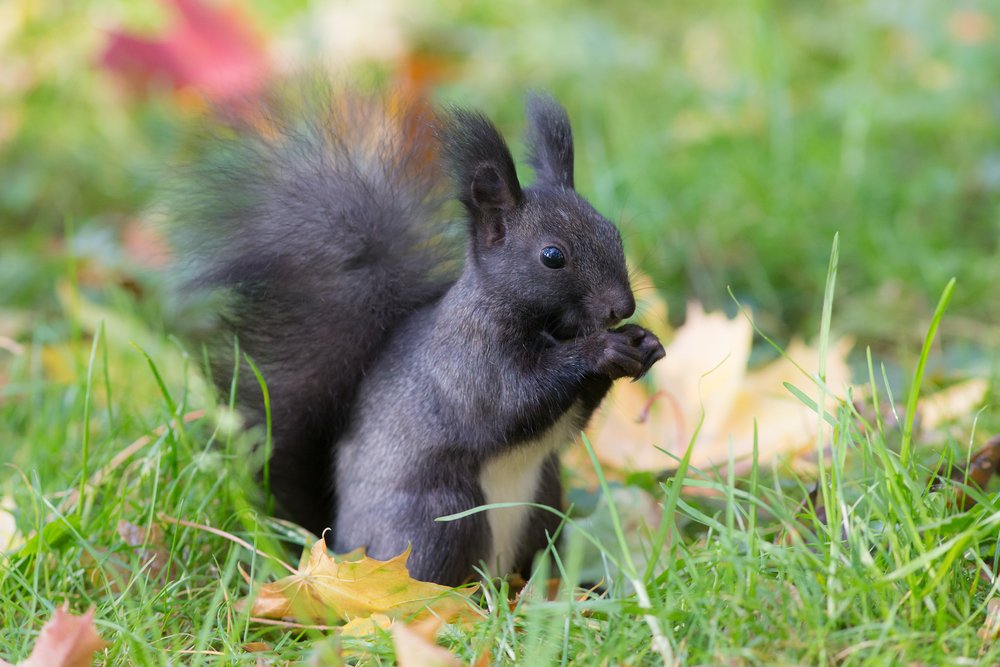 Squirrels belong to the rodent family and have their close relatives of prairie dogs, marmots, and chipmunks. They are omnivorous and can eat all sorts of nuts, berries, and whatever they find in their way. They can also eat bird eggs and small insects as well. The squirrels cannot fly but can jump and hop from one branch to another. These are hibernating rodents which means they spend their cozy winters sleeping and enjoying. The squirrels are tiny bush tailed rodents and are found in almost all parts of the world. An approximate of two thousand species of squirrels exist in the whole earth and are usually categorized into three categories. The categories are flying squirrels, ground squirrels, and tree squirrels. Their sizes also differ significantly accordingly to the different species and classes. They also exist in different colors out of which the black squirrels are the rare ones. •    The diet and behavioral concepts of these black squirrels remain same as of the grey ones. They eat berries, nuts, and other plant food as the grey squirrels.

•    The black squirrels make their nests in trees in order to stay cozy and warm and also hide their food in their secret hideouts so that they have access to food at all times in their hiding place.

•    The black squirrels are not just limited to jungles; instead, they are majorly found in urban areas as they can coexist with human beings.

•     The black color of these black squirrels has a significant advantage of camouflaging the squirrels in the dark and hence protecting them from their enemies.

•    Apart from the camouflaging aspect, the black color helps these squirrels in absorbing more sunlight and heat and thus is helpful for keeping them warm especially in winters.

Lifecycle of a squirrel

Squirrels are supposed to be cute and notorious and are tiny diurnal rodents which you can easily sight in your garden. If you are thinking about the squirrel lifecycle, then here is how a squirrel completes its whole lifecycle. The mating process of a squirrel takes place in early springs or late winters. When the squirrel’s mate then you can find the males chasing their female counterparts from branches to branches with great speed. After the mating process completes, the new baby squirrel is born which is naked and does not have eyes thus are born blind. Their body weight is hardly two ounces at the time of their birth and are nursed by their mothers for about two months.

The female squirrels can litter two times in a year and thus can give birth to approx four squirrels in a year. In some special cases, they can also give birth to eight young ones depending on various factors such as weather, food, etc. The pregnancy period of a female squirrel is about two months and then finally she gives birth to the squirrels. A squirrel attains its adulthood after nine months, and in the first two months, they are wholly nursed by the mother squirrel. The squirrels differ in their sizes and are found in sizes of all types varying according to their species and categorization. If you consider an Indian giant Squirrel, it is almost about 36 inches in size and can weigh about four pounds whereas an African pygmy squirrel is only about 2.8 inches and has a weight of about 0.35 ounces. Thus the size and weight differ in higher proportions from one squirrel to another. The grey squirrels that are usually found in parts of North America are considered as medium-sized squirrels. They can grow and attain a size ranging from 15 to 20 inches; if you count on their tail, then the size can be a plus 6 to 9 inches along with their bodies. Their body weight is approximately 1.5 pounds. Thus you can clearly understand the great variations amongst different types of squirrels. According to news, the squirrels are found in almost all parts of the world except the continent of Antarctica and Australia. The tree squirrels are supposed to build their nests in trees and ground squirrels are supposed to make their nest underground. They can dig burrows and tunnels to find them their shelter place. During winters squirrels hibernate and spend a long time in sleeping in their holes. The squirrels which are capable of flying namely the flying squirrels also make their nest in trees and can glide from one tree to another using the muscular membrane which is situated in between the body and legs of the flying squirrels.

Habit and other facts •    The nesting aspect- Squirrels make their nests using tree leaves, twigs, and other nesting materials. They build their nests in trees in holes and cavities present in the trees.

•    Food caching- since we all know that squirrels hardly come out of their nests during winter season thus they gather food for themselves during the summer season itself. They make their secret places where they keep all their food which they use during winters. They can hide their food in burrows, flowerpots and other locations where they find it safe to store their food to be consumed in winter months.

•    The communication system of squirrels- the squirrels are capable of chattering, purring, screaming and barking in order to communicate with each other. They also inhibit the capability of communicating using their body language of stamping their feet and moving their tails

The complete process that a squirrel follows after being born

•    The baby squirrels are born naked and blind, and they do not leave their nest as soon as they are born.

•    Firstly, the squirrels double their weight in the very first week in which they are born to become healthier.

•    In the third week, the squirrels start getting their fur.

•    After a period of four weeks, the squirrels start teething and also start opening their eyes.

•    After a span of eight weeks, the baby squirrels start hopping out of their nests to take a tour to the nearby places. The body size of a squirrel reaches half the size of an adult squirrel around the eighth or ninth week.

•    Finally, after a span of ten weeks the squirrels leave their nests.

•    Once they leave their nests, they build their own homes and do not return back to the nests made by their mothers.

•    The squirrels start feeding on solid food after about twelve weeks and start eating all sorts of food such as berries, fruits, vegetables, nuts, etc. the squirrels can almost eat one pound of food in a whole day. It may be surprising but these squirrels can also small snakes as well.

•    They also gather food for themselves on which they can feed during the winters.

•    His whole process continues for every baby squirrel that is born and has a lifespan of about twenty years.

The lifespan of a squirrel

A squirrel has an estimated lifespan of twenty years, and if you talk about the wild squirrels, they hardly live up to eight years. The mortality rate of these squirrels is very high during their first year.

Tips to get rid of squirrels

Black Squirrels are not harmful in nature for human beings, and the only ways in which they can harm you is by stealing food and causing nuisance in your garden area. The squirrels can create problems for you by stealing berries, fruits, seeds and can also attack your attic if they get entry to your house. The squirrels can also excavate bulbs and seeds and gnaw on your wooden pieces. They can also dig holes here and there to hide their food which they save for themselves to be consumed in the winter season. These squirrels live on heights of a tree and thus are not easy to be caught. Here are few tips by which you can get rid of these playful rodents.

Identification of the activity and path

If you want to gain control over the squirrels infesting your garden and yard and want to keep them away from entering your house, then you have to keep track of the passage which they use for their travel. Once you locate their path, you can accordingly select a control method to keep these rodents away.

Remove the sources of attraction

Put limitation on the accessibility

Once black squirrels have infested your gardens and have nested up in a tree that belongs to your garden, then it is complicated to get them relocating and for taking some other place to lie. So if you see squirrels crawling and hopping in your yard then make sure that they are limited to those areas and do not fond a pathway to your house. This is the only way in which you can prevent further damages caused by the squirrels. All phone wires and electric wires should be secured with plastic tubing so that these squirrels don’t get a chance to nibble on those electrical wires and create problems for you. All outlets and chimneys should be closed properly so that these squirrels don’t gain entry to your house. You can select a live squirrel trap, bait it with some of the favorite squirrel food such as berries and nuts and keep the trap in a place where the squirrels trace their regular path. As soon as the squirrel gets attracted to the bait placed inside the trap, the trigger will shut down the doors of the trap, and the squirrel will be caught inside the live trap. You have to keep a regular check on the trap that you have placed, and once you achieve success in finding one, then you can throw them away to a far-off place. This is one of the best methods that you can use for relocating the squirrels that have infested your garden area.

You can also use the mesh fences on your boundary walls and other openings to keep these squirrels away from gaining access to your boundaries.

•    Squirrels can chew almost anything, so make sure that you are using rodent-proof containers for disposing of wastes in your garden or even metal cans will do.

•    Close all such entries which can lead the squirrels into your home.

•    Squirrel repellents should be used as soon as you trace a squirrel for the first time to prevent further squirrel infestation.

•    You can also use deterrents such as pepper spray and peppermints which will keep the squirrels away from your house.

•    Squirrels can even eat up plant bulbs so before you plan these bulbs make sure that you dip them in squirrel repellents and then plant them so that the squirrels cannot attack on the bulbs.

•    You can also call for a pest control company to take charge of controlling these critters infesting your garden area. This is an effective method because these professionals have all their means and ways to get your garden free from the attack of these squirrels.