Beetles are insects that belong to the order Coleoptera. They are identified by their front wings that have hard cases. This characteristic distinguishes them from other insects. The Coleopteran order has over 400,000 species of beetles which makes it the largest order in the animal kingdom. This order comprises of 25% of all animal life forms known to man as well as 40% of the known insects. The largest family ‘weevil’ also belongs to this order with over 70,000 species falling into it. These insects are found everywhere except the cold Polar Regions or areas around the sea. Tropical click beetles are found in the tropical regions. Insects mostly feed on fungi and plants. They also come in handy to break down the debris from plants and animals, and they also eat different invertebrates as well. Some of the beetle species work like agricultural pests, and others eat scale insects, aphids, thrips and various other plant-sucking insects that are known to damage the crops. Over 300 species of beetles’ larvae are also used as foods. The larvae species that are consumed mostly are rhinoceros beetles and mealworms. Beetles have a major impact on the lives of humans because of the horticultural, forestry and agricultural uses. Some of the species of beetles including mountain pine beetle, Colorado potato beetles, and coconut hispine beetles are serious pests, but they don’t cause much damage. Dung beetles and lady beetles also have benefits and are fruitful in controlling insect pests. Merchant grain beetle feeds on biscuits, fruits, and nuts within the households. Khapra beetle feeds on wood and is found in cabinets in the households.

The head has the mouthparts which are projecting forwards, and in some cases, they are turned downwards as well. Their eyes show tremendous adaptability and are compound like the eyes of aquatic whirligig beetle where the eyes are equipped with display both above and under the waterline. On the other hand, the eyes of a longhorn beetle and those of weevils are divided while many of the species are equipped with notched eyes. Different beetle species use their antennae differently; for instance, some use them while mating and some use them as a defense, and some of them use while swimming to collect air and passing it through their submerged bodies. Some of the species have antennae that have venom injections too.

Their thorax has two different sections; one is prothorax and prothorax. If a beetle is viewed from below, it is clearly observable that thorax region has all pair of legs as well as the wings. Everything below thorax is the abdomen region. Their legs are multisegmented and are equipped with claws that can found on the end of a tarsal segment of the last pair of legs. Legs are used for moving. However, they also serve many other purposes for different species as well.  For the diving beetles, the last pair of legs is modified for the purpose of swimming. Some beetles have fossorial legs while others have spined legs; these are found in ground beetles mostly. Some of the beetles also use their normal rear pair of legs to leap from one place to another. Beetles don’t use their forewings in flight, however; these are used to cover the hind wings. In some species of beetles, there are no elytra or hard wing cover. Behind the metathorax is abdomen section and it is made up of a series of rings for the respiratory purposes. These have three different sections including sternum, tergum, and pleura. Tergum is membranous and is covered by elytra in all species while the pleura are hidden, and the sternum is widely visible in all species. In some species, the abdomen itself also has sternal lobes. 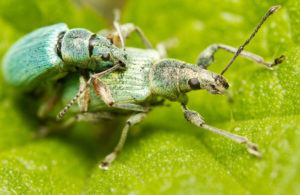 These insects go through full metamorphosis, and there are four stages; egg, larva, pupa and imago. Larvae are also known as grubs, and the nymphs are called chrysalis. Some of the species may have cocoons developed around their larvae. Different species of beetles undergo hypermetamorphosis as well. While mating different species use various pheromones like some insects use pheromones that are developed from fatty acids while others use amino acids for the same purpose. Before mating, both male and female may also engage themselves in different behaviors. Sometimes the male and female involve in some dialogue before they mate. In some species, the male counterparts tap their antennae on the eyes and pronotum of females. However, different species show different traits before mating. The female bark beetles grant access to males for mating after a courtship song that is best suits them. The competition also plays a significant role in some of the beetle species. Many of the male beetles are extremely territorial and the males, in this case, are equipped with horns on their heads which makes their body length greater than the females. In some cases, the copulation takes hours to complete while in other cases it is brisk.

As mentioned above, beetles undergo full metamorphosis which has four stages; egg, larva, pupa and imago. As all beetles lay eggs; some species hatch immediately while some undergo different instars too. Eggs are smaller in the case of the species that have more instars. Instars are different larval stages where the growth changes occur. Some beetle larvae share same predatory traits like adult beetles. Instars vary between different species. If the larvae are starved, they tend to reverse their development and growth.  After the larvae pupate, they emerge fully formed, but they don’t have their mandibles yet. The adults have varying lifespans from some weeks to some years which vary across the species. Elytra are designed to move the beetles through confined spaces as well as protecting the wings while flying. When they are not in flight, the wings are covered under the elytra.

Most of the species of beetles are characterized by their hardened exoskeleton which is known as elytra, but some of these species also have very short-sized wing cases too like the rove beetle, and some of them also have soft elytra as well like blister beetle. The shortest beetles belong to the feathering beetle genus, and it is called scydo Sella Musa wase NSIS. The largest beetles belong to Titanus, Goliathus and Megasoma species. The longest beetle knew measures up to 6.6inches. Beetles are typical insects, however; some of the species are also novel like water beetles which while diving, trap air bubbles under their wing cases. Beetles undergo full metamorphosis and show different within the body structure right after hatching to becoming an adult. They also have an immobile pupal stage as part of this transformation stage. Some of the types of beetles like stage beetles have long mandibles which are used to fight other males. Many of the types of beetles also have a bright colored outlook which is a sign of warning that they are poisonous while some of them only mimic these bright colors and are harmless. Many of the beetles are equipped with very effective camouflage to escape predators.

In some of the species of beetles, parental care is also found where they house their young and feed them until they are adults. Beetles use their pheromones to communicate as well. Females of Japanese beetles produce pheromones for the males for mating. If this Japanese beetle pheromone is not produced, then males won’t be able to detect the females. Adult beetles also have the tendency to overlap generations within the colony of adults. Division of labor is also characterized between reproductive and non-reproductive groups. Beetles have the ability to consume different types of food that vary across different species. Certain beetle families are omnivorous and eat both plants and other insects or worms while some are purely carnivorous while others only plant-eating beetles. Many beetles also consume decaying organic matter which can range from dung to dead animals or plants as well. Many beetles like powder post beetles and deathwatch beetle eat wood, and many of them feed under the bark. Some beetles also eat fungi and algae.

There are many types of beetles, some of them are very common and are enlisted below,

Carpet beetles are 3 millimeter long and are common in the houses where they do not cause much noticeable harm. However, it is a severe pest in the museums where natural history is displayed as it can destroy the biological specimens in the displays.

These beetles have long antennae, however; some of its species do have short horns as well. This family is large as well and houses 26000 species, and several of them are pests. The larvae of these insects bore into wood and cause some severe damage to trees as well as untreated lumber.

These are also known as snout beetles. Weevils are primarily herbivorous and are classified in 60,000 different species. Weevils are considered to be pests because they can destroy standing crops. However, they are used scientifically to kill the invading plants.

The scarab beetles or scarabs are luminescent beetles and have over 30,000 species and are classified as Scarabaeidae and are true beetles. They have bright metallic colors and have clubbed antennae. The front legs of these species are adapted for digging. These bugs are nocturnal mostly and live underground or under the debris and don’t; what themselves exposed to sunlight.

The darkling beetles have over 20,000 species and are omnivorous. They love to feed on rotting wood, decaying leaves, dead insects, fungi, larvae and fresh plant matter. Their larvae are known as mealworms and are nocturnal as well. Some of the species live in an extremely harsh desert environment as well.

It is one of the common species of insect and has copper-colored elytra with green colored head and thorax. In Japan, it is not considered as a serious pest because natural predators control it. However, in North America, it is a genuine pest of over 200 plant species 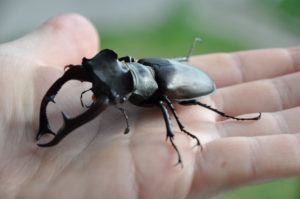 Modern day beetles have a significant prominence in human culture, and it varies from their use as pets or as fighting insects for the purpose of gambling or entertainment to their use in Egyptian sacred scarabs and art. Because of their bright colors some people also like to collect them and use them as beautiful displays.

In the ancient cultures, beetles hold a special place. Many of the Egypt revere sacred scarab which goes to show that these beetles have had plenty of significance during that time.

2. In entertainment and art

The fighting beetles have been used for the purpose of entertainment as well as gambling for a long time now. The sport exploits the territorial behavior of these insects. Many people use them as collectibles and for ornamental purposes because of the beautiful and colorful elytra.

Many beetle species feed on plants which have economic significance including tobacco, potato, trees, cereals as well as dried fruits, cotton. Some of the species have also developed immunities to the pesticides. During the Second World War, Germany used Colorado potato beetle to destroy the crops of enemy nations.

They can be benefactors to the humans as well as a tool for controlling other pests. Some of the species of ladybird beetles feed on the larvae of thrips, and aphids. Some also feed on caterpillars, mealybugs, scale insects, wireworms, and whitefly, etc.

Humans consume nearly 350 species of beetles. Beetles are used as food usually at their larvae stage.

Diving beetles are the most common ones used for this purpose. In Japan, young boys keep stag beetles and rhinoceros beetles as pets.

7. As things to collect

Due to their beautiful and colorful elytra, different species are also used as items to collect. The practice as things to collect was more common during the Victorian age.

Some of the fun beetle facts are provided below,