Backswimmers belong to the family of Notonectidae. These species can be found worldwide. The name is given to them because they possess the ability to swim on their backs. It is in the shape of a keel and its side’s looks like the paddles of the boat. It is also known as water boatman. Some people confuse this species with a very similar looking insect named lesser water Boatman. 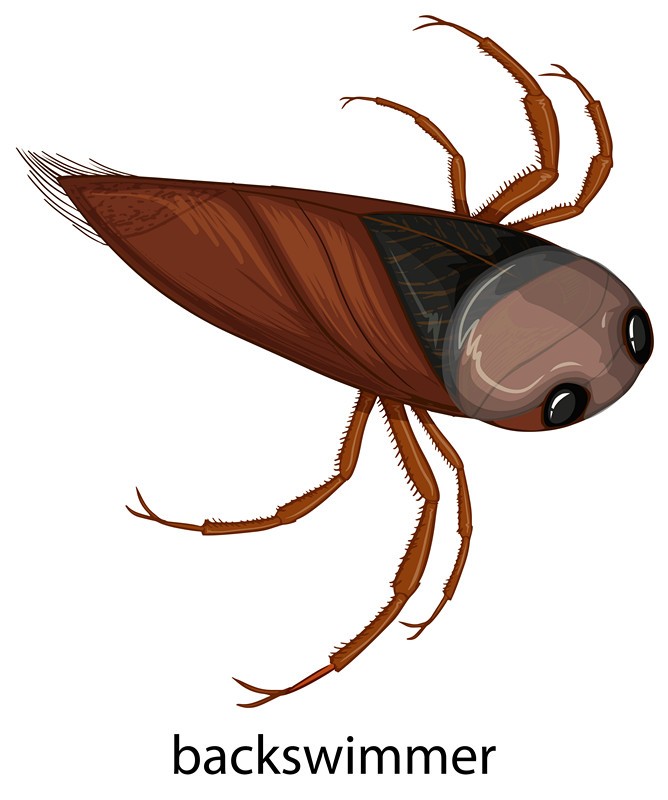 The legs of backswimmers are used for propulsion. The head of the backswimmer is oval shaped which is above its elongated body and long legs. They are about 15m in length. The body color is usually dark when it is observed from the surface of the water. This water creature has reddish eyes and its oar-like paddles which them to swim. Due to bubbles in water sometimes it gives a silver appearance. The ventral sides of backswimmers are covered with hair. The female has larger bodies as compared to the male back swimmers. It can also swim upside down.

Everything is fair in love and war. These water creatures are usually found in still water and ponds. They are also observed in rice fields and rivers. They have wings, but they love spending most of their water flying from one pond to another. They are found in North America. These backswimmers are seen flying at night because they get attracted towards the artificial lights.

They are the efficient and active predators which suck the mouth parts. They are often found stalking and chasing the aquatic plants and small aquatic insects. They first wait for their prey to pass by and quickly deliver a painful sting that helps the prey to subdue. Then it starts digesting its prey.

The native backswimmers of North America usually complete their lifecycle in 6 months. When the offsprings get hatched from their eggs, they go through different stages before becoming an adult. The female backswimmer lay their eggs somewhere near water. The eggs are white in color and elongated. Some backswimmers make a whole in underwater and bury their eggs there near the water stems. The eggs are hatched, and offspring emerge after 5 to 6 weeks. Initially, the offspring has white bodies, and their eyes are red in color.

Many people doubt that they are poisonous, but they are not truly poisonous.  Even if they are poisonous, they are not poisonous to humans. When these creatures pierce their respective prey, they emit something called that often subdues its prey. And when this same creature bites other animals like dogs, cat, and other humans the result is the combination of painful reaction with the sensation of burning. If the person who is going through this is sensitive, he may get effective. You can immediately treat the infected area with a cold compress; you can also go for painkillers. If you still see the sign of severe reaction, you must consult your physicians. 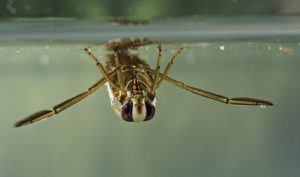 People often get confused with the backswimmer and the water boatman. It is because they both resemble each other physically. Their long and modified hind legs are used for rowing through the water. The back swimmers have common genus called Notonecta. It is observed that they are larger than an average water boatman. The backswimmers posses’ triangular bodies and they are in the shape of water boatman. There is something keel like on the top of backswimmer which enables him to swim rapidly swim around. These are mostly seen swimming upside down. On the other side, the water boatman is more flattened in shape from the top from to bottom. Backswimmer has short front legs with no modification. Water boatman has spoon-shaped front legs; these helps to scoop the organic and aquatic matter in the mouth. The backswimmer has segmented rostrum which is used to bite its prey. The appearance of water boatman is slightly corrugated, and it has transverse black lines on its body. In contrast to this, the backswimmer has bold patches on its body which are in red yellow or white color.

Backswimmers are found in the open water here they can pursue the mosquito and other aquatic insects very easily. The water boatman is mostly found at the bottom of the water. They are not easily found in shallow water. They are often seen hidden under the leaf or any other object in the water.

We often face different problems because of this flying water boatman. They share our swimming pools in summers, and they also invite their other bugs to share your pool. Here are some ways that will help you to get rid of them: