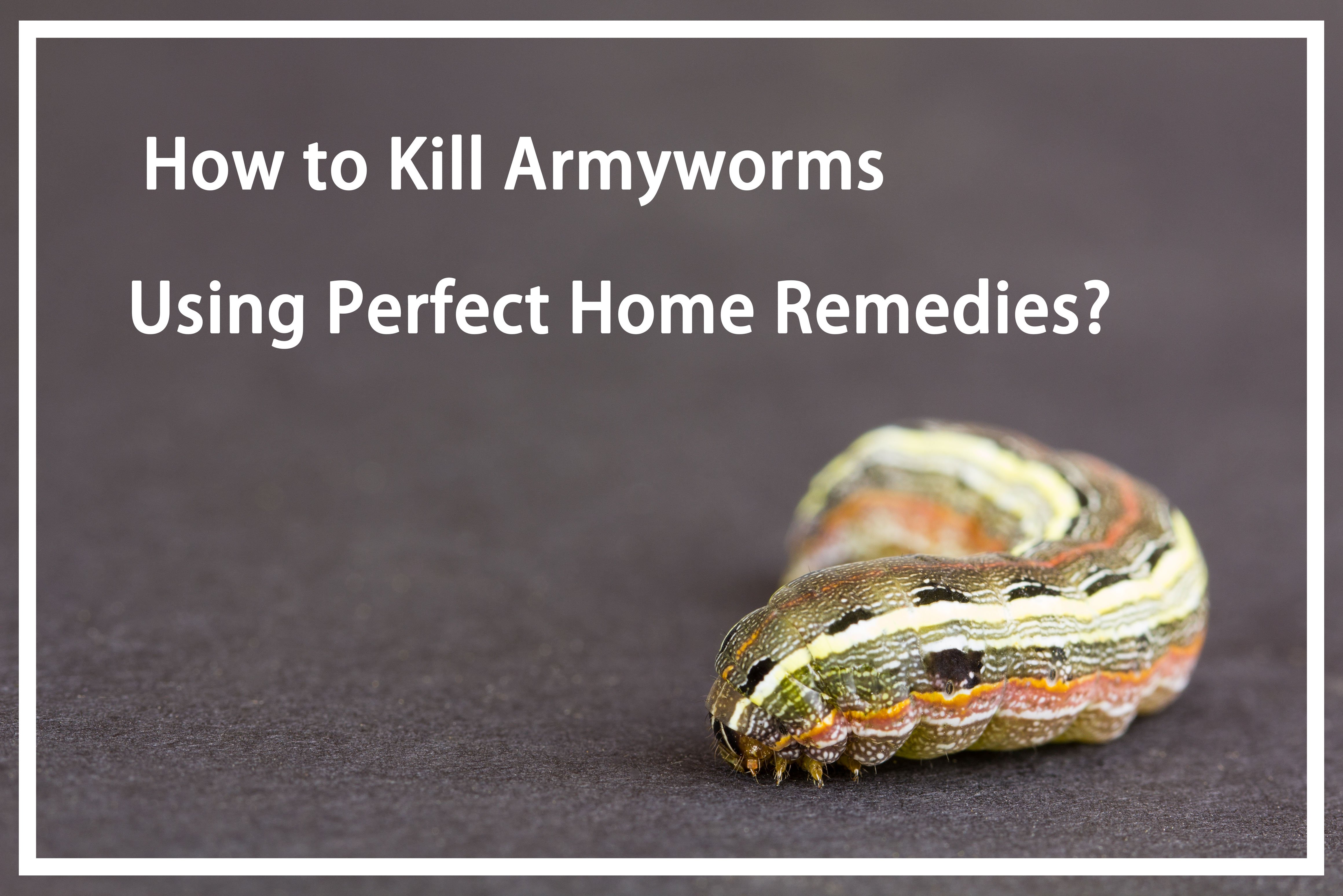 Ever seen crevices of dried grass carefully? You will see something living in those. These are where the armyworms lay their eggs. The eggs are laid in groups and in hidden areas. They hatch in a duration of a week to three weeks, depending upon the temperatures. These are often active/seen during hot and humid evenings and multiply in large quantities within no time. Since Armyworm eggs are found in batches, they also breed at the same pace. These appear like caterpillars; however, if ignored, these can create a havoc in your garden and field. Therefore, it is imperative to control armyworms as soon as you get to know about their presence in your backyard.  Armyworms are nothing but the larvae of moths. They feed themselves on grass, plants and some cereals. They are referred to as armyworms because they multiply in no time and are ready to reproduce. With a lifespan of about a month to two months, armyworms produce very fast. It is for this reason that they are called armyworms. Just like the eggs are laid in groups, similarly these hatch also in groups. It is this factor that makes them capable of destroying a garden overnight if are in huge number and are ignored in their hatching period. So to control armyworms is indispensable if you want a good yield of cereals such as maize, sorghum, cotton and thrive of some eight some species of plants.

1. How to find that armyworms exist in your garden/field?

Everyone intends to have green pastures and a healthy kitchen garden full of leaves. This intention makes them water the field and takes care of their gardens with sincerity and intensity to see some yield.  All this will be gone in vain if the armyworms attack and you do not notice them on time. To first notice and begin the process to control Armyworms, one must carefully notice the following things:

Once you notice any of this, consider this a sign, even though you may have not seen the real caterpillar, take some serious action to mitigate the loss and prevent it from happening further.

2. How to control armyworms in the garden?

These are some of the natural ways that tell us how to get rid of armyworms. According to the weather, temperatures and the harvest, one can choose the methods judiciously and control armyworms from multiplying.

Fall Armyworms: Needless to say, all armyworms are very dangerous as they jeopardize the health of the cereals, plants, and grasses too. Amongst all other worms, the fall armyworms cause the maximum damage if undetected. The reason I am saying ‘undetected’, is because these multiply rapidly and are unseen if you do not have that vigilant eye. The female moth lays about two thousand eggs on the grass blade and that goes unseen. When these are well fed, in a matter of fortnight, they are ready for the damage. The Fall armyworms produce more rapidly than any other so one must always keep some home remedies to deal with armyworms to cease their growth immediately as soon as they are observed gobbling the grass or cereals. Fall armyworm larva is greenish-brown in color with a white stripe below the top of its back, a brown-black line over the midline, and a pale colored line with a red-brown tinge below. These features will allow you to differentiate between fall armyworm or a beet armyworm. Fall armyworms often feed themselves on cotton plants and cause severe damage. These are usually corn strain larvae and cause maximum damage to other crops such as sorghum and maize. They often do not feed much on fruits, unlike other armyworms. The fall armyworms cause maximum damage during the late summers in the Southern US and in the early fall in the Northern regions. They have now been invasive to Africa too, since 2016 and have already spread to about 28 countries in Africa causing significant damage to maize. Another significant feature of the Fall Armyworm is that it is cannibalistic. If they are overcrowded they begin to eat other.

Beet Armyworms: These larvae of moth is also known as asparagus fern caterpillar. These armyworms feed on the ornamental and vegetable plant. There are no such distinguished features of this caterpillar except that the old caterpillars develop yellow stripe. The Beet Armyworms destroy the leaves and eat the tender leaves leaving behind only the veins of the leaves. The beet armyworms have a distinct feature when they grow into a full-size caterpillar. This feature makes them resistant to any insecticide and can harm your kitchen garden, or the lovely floral growth of the ornamental plants in a matter of few days. So it is indeed very vital to identify these and control the growth as soon as possible in order to prevent any loss to the wonderfully watered and sincerely cared for garden. These pupate into the soil once they grow and begin to destroy your garden. If identified, you are fortunate and can hence, control armyworms from multiplying.  Once you know of their existence, without wasting much time you start picking the caterpillars and putting them into soapy water. This method kills them and prevents further infestation of these armyworms. One other remedy is that of the use of petroleum-based products and Neem oil. Although these are least perturbed by insecticides, petroleum-based oils and Neem oils are sometimes successful in stopping their growth. The oil must be used on the eggs that are covered in a cotton-like fibrous mass. These home remedies to deal with armyworms comes in handy if you have a full grown kitchen garden with ornamental plants, including other vegetables. In the article above, there are certain other natural ways that explain how to get rid of armyworms before despoliation occurs.

Besides these armyworms, any armyworms efficiently can destroy plants and vegetables. The reason why we must control them is that of its impact on the yield of maize, soya bean, sorghum and cotton plants. While we try to prevent or cease the infestation into the fields or the lawns, we must be careful of how we do this. Although we have discussed the remedies, we need to explicitly understand the advantages and disadvantages of using pesticides and insecticides. While we use liquid or granular insecticide to control the production of fall armyworms, we must understand that this must be done very carefully. The reason to be careful is that along with the larvae being killed, some other useful insects also die. These insects act as an opponent and kill the larvae of the moths, thereby naturally saving the lawn from infestation. One other disadvantage is that these insecticides are used over the crops that will go as a yield to many houses. Preventive measures must be taken such that the yield does not contain any toxins that may harm the human body. And above all, ‘prevention is better than cure’, lies true here as one must be cautious of many things while harvesting the cereals. These preventive measures are the best remedy to control armyworms. These are as follows:

With the origin of armyworms from the Southern and Northern parts of America, it has now affected African countries such as Kenya, Zimbabwe, Ghana (where a national emergency was declared in 2017 due to the rise in armyworms), Nigeria, Zambia, and Ethiopia.  These countries have been severely affected as the economy has lashed due to the destruction in the crop yield, especially that of maize. Armyworms have proved their adulation towards maize as this cereal has been largely affected. If this not controlled, this will soon lead to global crises as these caterpillars are ‘hungry’!