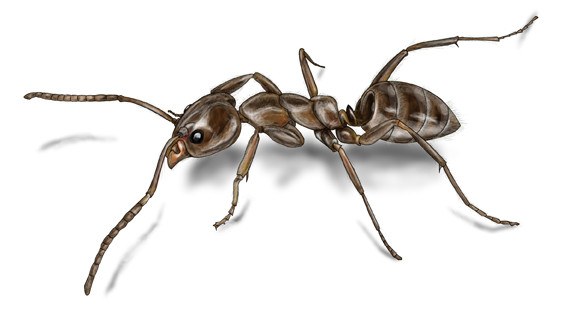 This ant species is found in the regions of Uruguay, Paraguay, northern Argentina, Bolivia and southern Brazil. Argentine ants are considered to be one of the invasive species among the animals. Likewise, it can be found in the United States as they were introduced a range of these ants back in the 1890s through freight ships.

Moreover, Argentine ant colonies have been found in South African, and some Mediterranean climate areas, as well as these, prove to be ideal for these ants. Argentine ants are very adaptable and have high reproductive potential especially in the ideal conditions.

These ants can vary in size from 1/16 of an inch to a quarter of an inch. They have a segmented oval shaped body with a shiny dark brown to black shading of color. Argentine ants have six legs and are classified as insects. They are equipped with antennae which assist them in finding their food and for social correspondence. Furthermore, some of them are equipped with wings.

Similar to California queen ants, Argentine ants like to build the colonies in damp conditions specifically located near their source of food. The Argentine ant colonies can grow to enormous sizes and have the potential to cover the entire habitats. For example, their colonies can cover your entire backyard or the whole garden.

The colonies reproduce and new nest bud off, and it continues until they take over their habitat. In the case of Argentine ants, a single queen with ten worker ants can initiate a new Argentine ant colony. As Argentine ants thrive in the hot and humid environment, a seasonal low in reproduction takes place during the mid of winter season. It primarily depends on the temperature and a damp environment that is available to them.

These ants prefer to eat sweet material and substances as their food. However, they are not very selective when it comes to their diet. They can eat eggs, meat, fats and oils as well. These ants have the tendency to leave their trails of pheromone which allows them not to visit the same place twice in search of food and waste time. In other ant species only the worker ants are designated with the job to find food, however, in the case of Argentine ants, Queen also play her role for finding food for the colonies.

Argentine ants do contaminate the food using their body wastes behind. It is the only significant threat that they pose to the human health. Even with this minimal amount of risk, invasive Argentine ants are rated amongst the worst animal invaders in the world because they are one of the most difficult ants to manage. When these ants travel and enter a habitat, they tend to replace all other smaller sized ants as well as native ants which can be disturbing for the ecosystem.

For instance, some plants do rely on other native ants to disperse their seeds from one place to another. Many other insects like beetles or reptiles like lizards purely depend upon the native ants, and these mega-colony ants displace the native ants which disturb the ecosystem. Therefore, it is ideal to use sweet syrup baits for these critters. These ants are also dangerous because these ants and some sweet secreting pests remain friendly to one another.

1. Direct and indirect damage to crops

Another problem is that these ants benefit from the aphid colonies, as Argentine ants feed on their secretion known as honeydew. The ants protect these aphids from their predators, and the plant parasites cause damage to the crops.

Because they do not pose any direct threat to human health but do contaminate foods, they are considered to be nuisance pests. They invade households when they are in search of water and food during their peak reproductive season or when rain floods their nests. When they find plenty of places to hide and build their colonies, they start multiplying, and this requires immediate pest control.

Argentine ants are considered as economic threats because they tend plant pests and protect them from their natural predators in return for the sweet substance called honeydew from the pests. Moreover, these ants shift the household pests from one place to another with a better climate so that more honeydew can be produced.

7 Ways to Get Rid of Argentine Ants

Different sort of repellents can be used to get rid of these ants. However, these repellents do have a musty smell, and for this, they are used with boiling water. Sugar bait traps are ideal as they are attracted towards sweet.

1. Inspect for Argentine ants inside and outside

Make sure that you check all different places at your home for these ants. They tend to make their homes where there is ample supply of food and water is available. Get rid of any debris or wood piles and make sure that none of the branches of the trees get in contact with your home as well.

2. Have the outside of the house sealed properly

Ensure that the outside of the house is properly sealed off properly. Seal off any cracks within the windows, walls, and ceiling so that the ants are not able to find any shelter in your home.

Using liquid boric acid as Argentine ant bait solution is ideal for purpose if these ants invade your home. The worker ants bring this boric acid back to their colonies and feed their larvae and queens with it

The use of different kinds of Argentine ant kits is ideal as well. These tools are designed to provide the best pest control when it comes to these insects (ants).

As for the scientific aspect of this solution, we don’t find many answers how talcum powder has been used for many ages to get rid of these ants. Wherever, you see Argentine ants invading you home just sprinkle of the talcum powder. These ants get in contact with the powder once but will not do the same twice.

Food grade diatomaceous earth is another solution to Argentine ant problem. It has been used by professionals for several years as a solution to the problem of numerous crawling insects and pests. Just use some of the diatomaceous in lining around the garden, your backyard or a particular place where you think these ants inhabit and you won’t find any of these ants again.

Some of the BEST Argentine ant repellents equipped with Borate-sucrose water baits are:

AdvionAnt Gel Insecticide comes with a plunger and is a transparent, odorless get that is designed using a very potent Argentine ant control formula. It is equipped with thiamethoxam which is very effective when it comes to managing a broad spectrum of ants.

It is very easy to use and apply on various areas using its plunger. The gel won’t have any physical effect on the residents.

It’s easy to apply and does not harm the physical condition of the area applied. It can also be used in cracks and crevices as well.

Similar to above, TERRO T300 Liquid Ant Baits is designed to kill not only the Argentine ants but all other pests and insects as well. The product come in ready-to-use packing, and the patented formula does not dry out at all.

As these baits don’t dry out, they tend to remain useful for an extended period. These baits are designed to attract the ants which make them even more useful.

TERRO T300 Liquid Ant Baits are designed to kill different types of ants and insects, and they are also formulated to attract them. They don’t dry out at all which keeps them efficient for a longer period. It comes in six different types of baits to provide you with maximum ant care solution.

Similar to TERRO T300 Liquid Ant Baits, TERRO 2 oz. Liquid Ant Killer is formulated to kill not only the Argentine ant infestations but all other pests and insects as well. Just use a few drop of this liquid killer, and you are good to go.

The Liquid Ant Killer doesn’t dry out; which makes them actively productive for an extended period. In the beginning, you will see more ants come to it because of its formula to attract the ants. They will take this ingestion to their colonies where the killing starts.

Just like TERRO T300 Liquid Ant Baits, TERRO 2 oz. Liquid Ant Killer is also easy-to-use and is designed to attract them and kill them. It is much easier for the ants to take back to their colonies when compared with the gel bait.